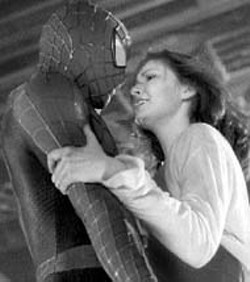 Make Mine MarvelMore cinematic superheroes on the wayBy Matt Brunson

Over the years, comic book fans have known something that Hollywood has long been unable to grasp: There's gold in them thar spandex outfits.

Between the colorful characters, the engaging storylines and the emphasis on action, it would seem like a no-brainer that popular superhero comic book titles could be turned into motion picture blockbusters on a regular basis -- and certainly since the late 70s, when the "special effects film" became a cottage industry unto itself. Yet curiously, Hollywood rarely took the bait. Superman was a huge hit in 1978, but nobody bothered to jump on the bandwagon at the time. Batman was a smash in 1989, yet few felt the need to strike while the iron was hot. Instead, superhero properties tended to either be diluted and placed on the small screen (the popular The Incredible Hulk, the short-lived The Amazing Spider-Man, the TV movie Dr. Strange) or completely bastardized and sent straight to video (wretched adaptations of Captain America and The Punisher).

It wasn't until the success of the film version of X-Men a couple of years ago (not to mention the recent reemergence of the Marvel empire as a powerhouse company) that studios decided to stop dawdling and start making a serious commitment to placing all those do-gooders in their own motion pictures. Here, then, is a look at the various Marvel superhero franchises that are currently being considered for movie treatment -- some are sure things, while others are still early in the planning stages. (Giving credit where it's due, some of this info was culled from www.upcomingmovies.com and www.rottentomatoes.com, two informative sources for cinema news and trivia.)

X2 The X-Men sequel is gunning for a release date of May 2, 2003. Director Bryan Singer returns, along with practically the entire cast of the first film, including Patrick Stewart as Professor X, Ian McKellen as Magneto, and Hugh Jackman (an overnight star thanks to the original picture) as Wolverine. Script details are fuzzy, though rumor has it that a couple of other X-Men from the comics will be added to the mix.

Daredevil One of the very best (and infinitely underrated) superheroes in all of comicdom will make his big-screen debut sometime in early 2003 (the role was previously played by kitschy Solid Gold co-host Rex Smith -- Rex Smith! -- in a lame Incredible Hulk TV movie in 1989). Ben Affleck will star as the blind hero, fighting criminals by day as attorney Matt Murdock and by night as the swashbuckling man in red. The cast also includes Michael Clarke Duncan as Kingpin, Alias's Jennifer Garner as Elektra, and a cameo by Chasing Amy director (and former Daredevil scripter) Kevin Smith as a character named Jack Kirby (after the late, great illustrator).

Hulk After appearing in a well-liked (if not terribly inventive) 70s TV show, the not-so-jolly green giant is being accorded his own motion picture, due out next summer (a teaser trailer is being shown in theaters before Spider-Man). Eric Bana (Black Hawk Down) will play Dr. Bruce Banner, while his monstrous alter ego will be completely computer-generated. The cast also includes Nick Nolte, Sam Elliott and recent Oscar winner Jennifer Connelly. The director will be Ang Lee of Crouching Tiger, Hidden Dragon fame.

Fantastic Four The heroes of the comic that started it all back in 1961 were featured in a no-budget 1994 yarn that was shelved almost immediately upon its completion (it can only be found in bootleg video copies). This new take, however, will be the real deal (i.e. sizable budget, studio backing), thereby introducing the masses to the likes of Mr. Fantastic, The Thing, The Human Torch and Invisible Girl. At one point, Chris Columbus (Harry Potter and the Sorcerer's Stone) was slated to direct, although now he'll serve only as producer and co-scripter, with Bring It On helmer (and Raleigh native) Peyton Reed scheduled to take control. This one's still in the development stage, meaning there's no telling when it will see the light of day.