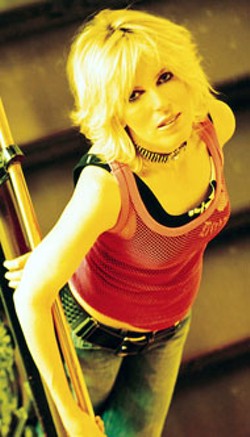 She is the matron saint of female country rock artists, a singer whose voice wields honesty like a scalpel and whose songwriting pen is dipped in the hurt of countless broken hearts. She, of course, is Lucinda Williams, and few musicians elicit the lofty compliments and geeky adulation that she does -- and that's just from other artists.

Williams, 50, was practically raised on critical acclaim from the moment she began putting her own songs to music in 1980. The general public finally caught on with 1998's Grammy Award winning Car Wheels On a Gravel Road, but by then Williams had already inspired legions of female musicians to confront honestly in song the dark side of loneliness and fucked-up love affairs.

"She's opened doors to writers, female writers especially, who feel like they might have something to say but might be a little afraid to say it," said Gigi Dover, who credits Williams as an inspiration when, along with Bill Noonan, she began Rank Outsiders, a staple of Charlotte country rock since 1991. "She's laid out the red carpet: "Go on and tell your story.'"

Over the years Williams has developed a reputation as a studio perfectionist who will agonize over every detail in the recording process, often for years. Some of that meticulousness has also earned Williams the "hard to work with" tag, but then quality always carries a price tag.

Williams' background provides another reason for her fussiness. She grew up in more of a literary salon than the traditional TV-centric American home; it was common for her father, the poet and literature professor Miller Williams, to play host to a cavalcade of writer types. The Williams talked writing like most folks talk gardening, cars or sports.

Caitlin Cary, 35, came to Williams' music right around the time she postponed her MFA work in creative writing to begin Whiskeytown with Ryan Adams in 1994. But she credits Williams' work ethic and long slog to success as a more important factor in her own solo career. Like Williams, Cary's two strong full lengths -- While You Weren't Looking and I'm Staying Out -- have been critically well received but largely ignored in the sales charts.

"She's a total inspiration," Cary said. "Whenever I think this is never going to work for me, or I'm never going to be able to make a living doing this, I think about her and how long it took her to break and how many fantastic records she made before people started paying attention."

While Cary admits she's not her biggest fan, the respect Williams commands from other musicians was in evidence at a recent Cary show in Los Angeles. When Cary's set was over, she learned that Williams had been in the front row dancing throughout.

"Thank God I didn't know it until after we played," Cary said. "And I'm very grateful to my band for not telling me."

Nicole Atkins, a 25-year-old singer-songwriter who splits her time between her home base in New Jersey and Charlotte, was happy to cite Williams' music as an influence on her recent material. She even finds herself subconsciously dropping Lucinda "isms," as Atkins called them, into her own performances, though she's wary of copping someone else's style.

"She has almost a snarly drawl, and I've caught myself doing it a couple of times unconsciously and I've tried to be more conscious of that," she said.

But it's a strong pull, Atkins admitted. She remembered hearing Williams' "Passionate Kisses" in high school and falling in love with the singer's unconventional singing style. The song, by the way, earned Williams her first Grammy in 1993, though it took Mary Chapin Carpenter's cover of it to gain Williams the award.

"Her voice is not like the typical female voice, she's not trying to be sweet and she's not trying to sell her womanhood," said Atkins. "It's just a totally angry human voice. I consider her almost an early Elvis Costello at the point she's at right now."

Like Costello -- with whom Williams performed at Country Music Television's premier "Crossroads" segment in 2001 -- Williams' brutal honesty and occasionally acerbic way with words can be both intimidating and seductive.

Dawn Kinnard is a 26-year-old Pennsylvania native whose self-titled debut -- an eight-song demo, in reality -- has garnered much critical praise and interest. It's also earned her premature comparisons to Williams, which mirrors the experience of fellow newcomer Kathleen Edwards, whose debut Failer last year also drew the same double-edged praise.

Kinnard's debut does suggest that she shares Williams' ability to cut to the heart of a matter, lyrically, and with an economy of words. A rapid learning curve has Kinnard already extending her songwriting into new dimensions and unique arrangements (with help from band-mate Mason Neely), so she no longer shies away from the comparisons with one of her heroes.

"What I like about her songwriting is that she writes about these dark experiences she has and somehow makes them seem beautiful," Kinnard said, adding of the comparisons, "I think it's a compliment -- she's someone I really respect."

Lucinda Williams and The Bottle Rockets appear Sunday, March 7, at the Visulite. The show is sold out.