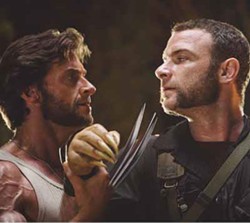 Claws slash, fists smash and teeth gnash in X-Men Origins: Wolverine (**1/2 out of four), but will audiences bash the latest superhero saga primed to kick off another summer movie season?

After all, once the initial excitement -- hey, it's one of Marvel's greatest superheroes in his very own motion picture! -- wears off, it's crystal clear that Wolverine doesn't measure up to the first two X-Men movies, the first two Spider-Man flicks or even last summer's Iron Man in terms of providing the dramatic weight and epic scope we've come to expect from our superhero sagas (I won't even bring up The Dark Knight, since comparisons might tend to reduce the competition to Elektra status). Having said that, it's also apparent that the movie isn't the disaster many speculated it would be, especially on the heels of bad Internet buzz and that infamous download that left FOX executives outfoxed (to date, the culprit has yet to be identified, much less apprehended).

As expected, the picture's chief selling point is Hugh Jackman, essaying for the fourth time the role that made him a star. His Wolverine (real name Logan) isn't the borderline-psychotic antihero I recall from reading the X-Men comics of the late 1970s and early 1980s -- no superhero film franchise would be that bold -- but the actor's flippant attitude and easygoing wit nevertheless have made him ideal for the part. Yet ironically, while this origin story is supposed to reveal more about the character than ever before, it really only serves to harness Jackman's considerable talents: He's an excellent brooder, but brooding's about all that the movie requires him to do.

Then again, he has reason to sport a sour disposition. The film begins with Logan as a small boy in mid-19th century Canada (yes, the long-living Wolverine has a bit of Highlander about him) and marches through time as we watch him and his equally indestructible brother Victor (Liev Schreiber) take part in various conflicts, including the Civil War, World War II and the Vietnam War (all of these tours of duty are encapsulated within the opening credits). It's during this last-named conflict that the siblings are recruited by a government suit named Stryker (Danny Huston) to become members of his elite fighting team comprised of mutants and mercenaries. The pair agree, but once Stryker proves to be a vicious man without morals, Logan leaves the outfit. Not so Victor, who has always been less scrupulous than his younger brother.

The years pass, and Logan, now working as a lumberjack, is enjoying a quiet life with an attractive schoolteacher (Lynn Collins). But once Stryker shows up on his doorstep with the news that someone's bumping off mutants, Logan worries that his violent past will catch up with him. That it does, which in turn leads to the expected personal tragedies, swears of vengeance, and nonstop processions of FX-packed action sequences. Along the way, other familiar faces from the X-Universe pop up, including a teenage Scott Summers (aka Cyclops) and ... well, we're not telling.

Hardly a lazy sequel, X-Men Origins: Wolverine contains a couple of nifty narrative surprises as well as some memorable tensions between its mutant players. Overall, though, it's hard to view this as an integral entry in the X-Men franchise. That's not to say it's as irrelevant as, say, Superman IV: The Quest for Peace, but part of Wolverine's appeal has always been his aura of mystery, and an origin piece only works to strip him of that secrecy. Besides, the movie's occasional clumsiness in laying out the expository groundwork ends up batting against its own intentions (for example, the reason for the fabricated family dynamics in the opening scene is never explained), which makes the picture seem even more trifling.

As Victor Creed (later Sabretooth), Schreiber is believable as both Logan's brother and his tormentor, while Huston proves to be as fascistic a villain as Brian Cox was when he tackled the role of Stryker in X2. Ryan Reynolds adds some necessary sparkle as the wisecracking Deadpool, and I just wish he had been handed the more sizable role of Gambit instead (as the latter, mediocre Taylor Kitsch lives up to his surname). Other actors express what's required of them -- it's often rage or regret, although mostly it's just frozen stares at the blue-screen areas where the special effects were inserted at a later time.