Bram Stoker's Death Ship: The Last Voyage of the Demeter No. 1

The Deal: IDW presents the untold tale of the Demeter, the ship that was last seen in Bram Stoker's horror classic Dracula; if you remember, the Demeter was the cargo ship that unknowingly transported Count Dracula across the ocean to England. Well, this is the story of the crew that got sucked dry by the legendary vampire. (Get that mind out of the gutter!)

The Verdict: The story was fairly interesting, but the art — which looked way too washed out and was rife with storytelling problems (Those wordless panels just don't work for every artist, ya know.) — made it difficult to enjoy this comic.

The Deal: The writing team of Keith Giffen and J.M. DeMatteis — known for their acclaimed Justice League run — has taken over the creative reins of Booster Gold. And they seem to be taking the comic in a new direction — one that ties into the bi-weekly comics Brightest Day and Justice League: Generation Lost.

The Verdict: A few months ago, I put Booster Gold on my list of "Comics I Hate," so I was obviously skeptical when it came time to read this re-launch issue. Well, I'm happy (and shocked) to report that not only was this comic entertaining as hell, it was also one of the best comics that Giffen and DeMatteis have turned out in years. The issue contained everything you might have loved about those great old issues of Justice League International: humor, action, tragedy, great dialogue and great characterization. They even managed to pen an interesting time travel story (which I typically hate). On the art-side of things, Chris Batista also banged some of his best pencils ever, showcasing some exciting action sequences and some incredible moments of raw emtion. I can honestly say that I'm amazed by how good the comic was.

The best comic book released last week, hands down, was Vertigo's brand-new horror/comedy iZombie No. 1. I wrote about it in my regular weekly column — check out the full review. 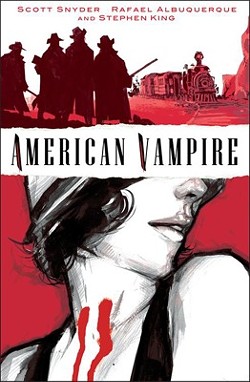 It's Wednesday, which of course means it's time for brand-new comic books. But before we check out this week's comics, let's wrap up a little of what last week had to offer:

American Vampire No. 1: The new Vertigo horror series written by Scott Snyder and legendary author Stephen King (yes, that Stephen King) debuted last Wednesday, and it's definitely a slow burner — but pays off at the end. Snyder's portion of the comic is filled some truly snappy, yet deceptively loaded, dialogue; and his tale closes on a truly chilling note. King's story — an offshoot of the lead adventure — though monstrous and slightly violent, is surprisingly fun. The art in both stories is skillfully rendered by Rafael Albuquerque, who seems to be a master of everything: storytelling, anatomy, emotion, and the kitchen sink. Good stuff.

X-Factor Forever No. 1: I guess Marvel's other retro mutant book, X-Men Forever, must be successful — because their really is no other reason to launch X-Factor Forever. I remember reading Louise Simonson's X-Factor comic — which, ya know, starred the original X-Men — back in the day, and it was truly awful. After reading this relaunch of that series (with it's old continuity attached), I see nothing has changed ... it still sucks balls. The contrived story lines and character interactions that just drip with bad soap opera influences are back front and center, just like the old days. Who the hell wanted this comic to return? Not me.

The Deal: Movie director and part-time comic book scribe Kevin Smith rolls out his brand-new version of the Green Hornet. This comic series is based on a screenplay written by Smith some time ago.

The Verdict: It's a decent read with some great, cinematic pacing and pretty good art — but it's not mind-blowing. If you're a fan of the Green Hornet (like me), it's nice to see the character back in action. If you're looking for a groundbreaking comic book experience, this ain't it. At the very least, it's much, much better than that GH series Now Comics used to publish back in the day.

The Verdict: Wow. Who knew this series would be this good. This month's issue, as usual, is entertaining as hell. Tense, fast-paced with engaging dialogue and — honestly — the best lineup of characters in any Marvel comic on the stands. Buy it.

The Deal: In this latest issue of Daredevil, Matt's life is falling apart (as usual) — but he runs a ninja army and a secret real estate development of some kind. Oh and the Kingpin is plotting something.

The Verdict: Am I the only one who thinks Daredevil needs a reboot — or maybe a jump start? The comic feels like its been running on one long story line since Brian Michael Bendis was handling writing chores. And it's getting tired ... as am I. It's waaaaay past time to switch things up in a big way.

Before I dive into the deep end of this post, let me give a big shout out to all the Deadpool fans who sent me such wonderful comments. I love hate mail! Keep it coming!

Mighty Avengers: I actually liked this book when Bendis was writing it and Frank Cho was drawing it. But Dan Slott's terrible dialogue, lame cast and hokey situations just ruined it. Khoi Pham's art, also, just never felt "epic" enough for such a heavyweight team. Luckily it's getting canceled.

Black Panther: Writer Christopher Priest penned the best version of this character; after him, Reginald Hudlin took over and screwed it up a bit. Now it's just downright unreadable. A female Panther? Did this book really need a new Panther? Just write good stories, OK?

Green Arrow: Again, this comic book was actually good not too long ago — back when Kevin Smith wrote it. Hell, even Brad Meltzer had a good run on GA. Then came Judd Winick. Winick's first pass on the comic wasn't so bad, but after GA married Black Canary, the comic tanked, and now — post-Winick — it's ureadable. I know there's a big GA story line on the way (about him going to prson or something), but it sounds sucky. Knowing DC, GA will become Solomon Grundy's bitch or something.

The Shield: This comic actually contains a few cool elements — like how the lead hero's powers and costume manifest — but it just seems superfluous. What's the point of having another patriotic hero when we have so many on the stands already? I just don't think the Red Circle heroes have enough of a following to warrant a line of books.

Cable: I'm amazed that a book all about two people (Cable and Hope) running from Bishop has lasted this long. A complete waste of a series. Can we get this thing over with already?

The Outsiders: Such a troubled comic. A lot of creative teams have tried a lot of different approaches, but it's just a mess. At this point it changes focus too much, and the characterizations are just all wrong. Peter Tomasi's stint started out with promise, but DC bigwig Dan Didio is writing it now; after reading the first issue, I'm not impressed. I'm a fan of the original series (a guilty pleasure), but my eyes bleed when I read it these days.

All Wildstorm comics: I used to love Wildstorm comics. Alan Moore's Wildcats and his ABC line? Incredible. Warren Ellis' Authority? Stellar. Jim Lee's art? Fantastic. So, who's idea was it to make the heroes operate on a post-apocalyptic Earth and then publish nothing else but videogame tie-ins? Mr. Lee, you've gotta do something about this!

I was talking to a guy yesterday who doesn't read my weekly comic book review column or this blog on a regular basis and he (let's call him DUSTIN) remarked that I don't really write negative reviews about the comics I read. And, although I do slam books regularly, his words got me to thinking that maybe I don't write enough about the comics I actually don't like. That said, here's a list of comics I currently detest:

Milestone Forever No. 1: I liked a few of the titles published by this multicultural imprint of DC back in the day, but I was never a rabid fan. This book (pictured left) marks the return of the company's characters, and it's just awful. Elementary art from Mark Bright and an incredibly corny story line that works or fails based on your affection for the Milestone pantheon of heroes and villains. I have no affection for the folks, so the nostalgia doesn't move me.

Justice Society of America and/or JSA All-Stars: The JSA worked well under the talented pen of Geoff Johns — but he's gone and now the current creative teams just seem content to revel in lameness. Stale villains, bland action sequences, terrible dialogue and characterization that's just wrong. I love the team and even I can't read this shit anymore.

Booster Gold: Time travel comics suck. Why? Because nothing of consequence can actually happen due to the fact that you can't change the past. Just bring Booster to the present, and make him a money-grubbing hero again.

The Hulk: Who is Red Hulk? Who gives a shit?! Jeph Loeb and Marvel have been stretching this story out for so long, whoever ends up being revealed as the man behind the red bad guy — even if it's Jean Grey or something — won't be worth the wait.

Deadpool: I can't believe people read this. It's the most inconsequential book on the stands — yet, it sells. Amazing.

Uncanny X-Men: Yeah, I've given up on this title. It's just dull. How dull? Well one of the big sub-plots for the last few issues has been: How can the X-Men keep their island from sinking? The solution? Namor ended up building a pillar under it. Now, I'm no engineering genius, but how was this a big deal? The X-Men figure out ways to jump from one side of the universe and back every other month; they can't figure out how to build a pillar?!