Just got word from Marvel Comics that the company is launching a brand-new Captain America series in July — written by Ed Brubaker with art by Steve McNiven — starring (slight SPOILER ALERT) Steve Rogers as Cap.

I'm not at all surprised by the move, as Marvel really needed to get Steve back in the suit in time for the Captain America movie, which comes out this summer. Still, I am disappointed because I actually like Bucky Barnes in the Cap role. (Maybe there'll be two Caps?) And the solicitation for the first issue of the new series left me under-whelmed:

Steve Rogers is back as Captain America but when a mysterious figure from his past returns with the Sentinel of Liberty in his crosshairs, deadly secrets will surface—and send shockwaves through the lives of everyone Steve holds dear.

Does every Brubaker superhero comic book have the same plot? How many folks from the past have to return to plague today's heroes with deadly secrets? And let me guess, issue three or four will be an all-flashback story that takes place during WWII?

Come on Brubaker — give me something new.

OK, bitching session is over. Check out some covers for the upcoming comic: 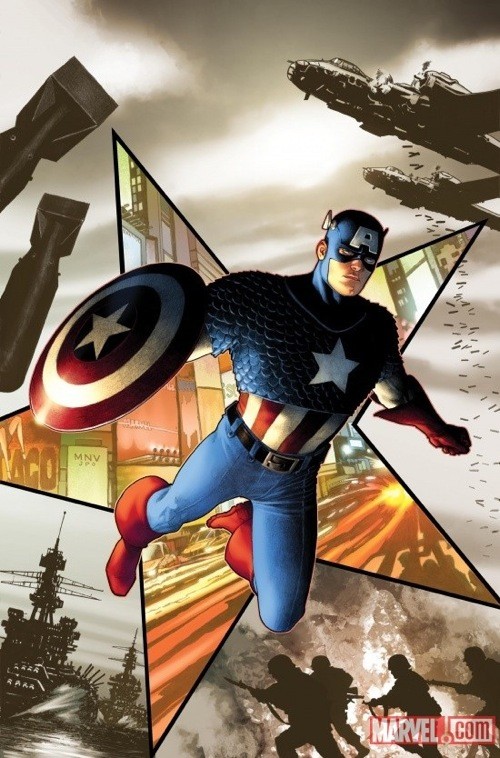 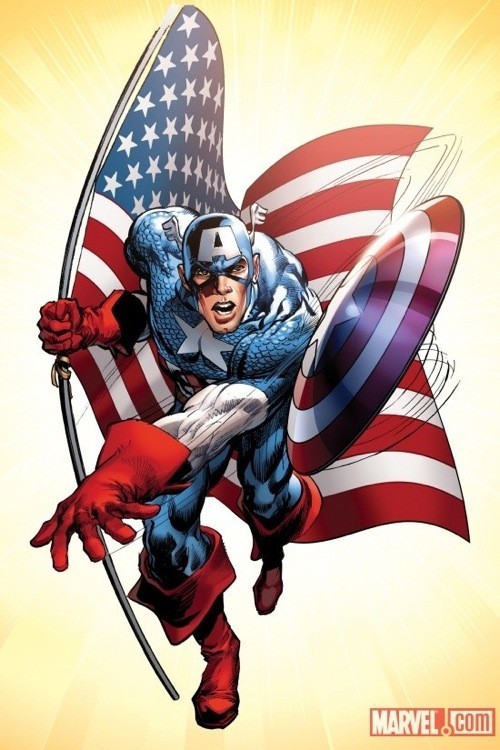 I was all excited to pick up the latest issue (587) of the Fantastic Four today — because, if you read comics at all, in this issue one of the members bites the dust.

Of course the cynic in me knows that "death" in the world of comic books is a temporary thing and whoever dies will just be resurrected in a few years. That said, I've been enjoying writer Jonathan Hickman's story line in FF since he took over the scripting chores, so I was pretty sure that at the very least, the comic would be an entertaining read. And then, I get this press release from Marvel Comics that totally spoils the whole damned issue. So who dies? You really wanna know? OK, well scroll down the page (or click on the link) and I'll tell you ...

Yep. And a bunch of other folks, too.

This just in from the folks at Heroes Aren't Hard to Find:

At long last we have officially set our dates for Heroes Convention 2010: JUNE 4-6, 2010. From some of the behind-the-scenes goings-0n, HeroesCon 2010 looks like it’s going to be the biggest HeroesCon ever, which is saying something if you’ve ever been to one.

For all the details, visit the Heroes Blog.

The media's going batshit over the news that Disney is buying Marvel Entertainment. Here's a look at just a smidgen of what's been written so far:

• Uslan and Disney Speak Out on Blockbuster Deal — Comicbookresources.com

• And the coolest link so far: Disney/Marvel mashups — SuperPunch

In possibly the biggest comic book news in the last 30 years — in case you haven't heard it yet — today it was announced that Disney has purchased Marvel Entertainment.

Honestly, I don't know how to even express my sheer flabbergasted-ness over this whole thing. Trust me folks, this is earth-shattering. And, of course the Internet is freaking out over it.

Now, only time will tell if this is a good or bad move for Marvel and the comic book industry. Will Disney meddle with Marvel's comic content (MAX comics, anyone?) — or is this finally the industry's opportunity to reach out to a much-needed younger audience?

For normal folk, that means "hump day" has arrived and the weekend is almost here. But for geeks like me, Wednesday is a truly glorious day — it's the day that new comic books flow into shops all around the country.

I've been personally making a weekly trek to the comic shop on this day of the week for more than 20 years, and I get excited with anticipation the same way each and every time. (And, no, I don't live with my mother.)

Anyway, what's hitting stands today and what's worth grabbing? I'll be providing a few "Quickie Comic Reviews" later today, but here's a list of stuff I'm planning to pick up:

The latest issue of Previews: In case you don't know, Previews is the catalog of upcoming comics and merchandise; it's published by the industry's largest distribution company, Diamond Comics. For collectors, Previews is an indispensable tool that shows you everything coming out from most of the comic publishers out there. I saw the art for this week's cover and it's featuring the soon-to-be-released limited series Image United. We'll see if that comic comes out on time. In the meantime, snag a copy of Previews and stay in the loop.

Usagi Yojimbo No. 122: A consistently entertaining read every month.

Batman and Robin No. 3: I've been loving Grant Morrison's relaunch of the Batman franchise, and — while this issue is a tad late — I'm excited to see how he and artist Frank Quitley wrap up the first story arc.

More DC books: Along with Batman and Robin, it looks like I'll be picking up a bunch more comics from DC this week, including the latest issues of Detective Comics (for the incredible art alone, although I am loving the Question backup story), Flash: Rebirth (another late comic, but I'm hanging on until the end) Green Lantern, Wednesday Comics, JSA and Wonder Woman.

Bart Simpson Comics No. 49: Like Usagi Yojimbo, it's just damned funny every issue.

Marvel Comics: From the folks at Marvel, I'll be on the lookout for Dark Avengers No. 8, Fantastic Four No. 570 (the start of the new creative team), Guardians of the Galaxy No. 17 (yeah, I still love it), New Avengers No. 56, New Mutants No. 4 and Secret Warriors No. 7 (one of my favorite new books).

Buck Rogers No. 3: This is my last attempt to read this comic. The first few issues were decent, but not incredible.

Check back later for a few reviews.

The latest news — or what I find interesting (so there) — from the world of comics:

• A new writer for Thor. (I really loved JMS' recent run on the book. He'll be missed.)

• Wow — a Spider-Woman No. 1 preview (see pic above). Been waiting a looooonnnggg time for this one. The motion comics hits iTunes tomorrow as well.

• Midnight, Mass. the TV show (based on the comic from Vertigo).

The good folks at Heroes Aren't Hard to Find — the comic book shop that provides books to Creative Loafing and that I personally frequent once per week  — is having a surprise sale tonight at 9 p.m.

The sale is apparently in honor of Marvel's 70th anniversary; be on the lookout for the first issue of The Marvels Project limited series — by Ed Brubaker and Steve Epting — and deals on a ton of back issues. Visit the shop's site for all the details.