Why do we consume certain things at certain holidays? Like turkey on Thanksgiving, cookies at Christmas, beer on St. Patty's Day, watermelon on July 4th ...

Growing up at my house, chicken, roast, steak, and pork chops were everyday entrees, but not ham. Oh no. Ham was saved for Christmas and Easter.

A quick search on Google and I learned that this became an American tradition because pigs are typically slaughtered in the fall and cured pork is typically was ready for eating around Easter. So serving ham is a seasonal convenience. I also learned that serving ham on Easter is a Northern European tradition, while the rest of Europe typically eats lamb. Even with our modern conveniences of being able to eat what we want, when we want it, we continue to observe this tradition of eating ham during special times of the year.

Now, I'm going to let you in on a little secret: I've never cooked a ham before.

Food News Do you know the Bagel Man?

If you're one of those poor souls who, day in and day out, finds yourself roped into Providence Road's human centipede of a commuter line, take solace in knowing you have a new place to treat yourself a pick-me-up: Einstein Bros. Bagel, situated at the corner of Providence and Queens in the Myers Park Shopping Center.

Charlotte entrepreneur Phil Rice inaugurated the new location bright and early today, at 5:30 a.m. This is the third Einstein Bros. Bagel opened by Rice, "Charlotte's King of Bagels," who has been in the food business for the last 10 years. Rice is slated to open his fourth Einstein Bros. location on April 17. He plans to open a total of 15 Einstein Bros. Bagels throughout the area.

"The craveable food and comfortable atmosphere of Einstein Bros. Bagels connect with our neighbors here in Charlotte," said Rice in a press release. "Despite the brand's small presence here in Charlotte, it already has a huge customer base. There's tremendous opportunity for growth into several new neighborhoods in the area."

As with any good grand opening, the restaurant is offering an incentive to its potential visitors the first 1,000 customers today get a complimentary travel mug.

With a great view of the Uptown skyline from its patio, Picante Mexican Grille is now open on Morehead Street.

Yesterday, CL's Web Strategist Desiree Kane stopped in, and this was her first impression: "The place had a Dirty Bird Records mix playing (super sexy San Francisco house music), which is going to go very far with the EDM nerds as well as bankers who like 'rich' sounding house music," she says. "It's also inexpensive, tasty, and is in just the right location with a great view of the city from the deck."

The website boasts fresh Mexican inspired burritos, tacos and salads, and says to be kid-friendly. The grand opening is soon to come. Picante Mexican Grille is located at 1500 W. Morehead St., Suite A. Call 704-375-6000 for more information.

Have you checked out Picante Mexican Grille yet? What do you think?

Easter Sunday is a mere three weeks away, so what better time than the present to learn classic recipes typically served during Easter lunch.

For the next three weeks, I'll be sharing some of the foods that remind me of my family's traditional Easter lunch, starting with my very favorite — deviled eggs. 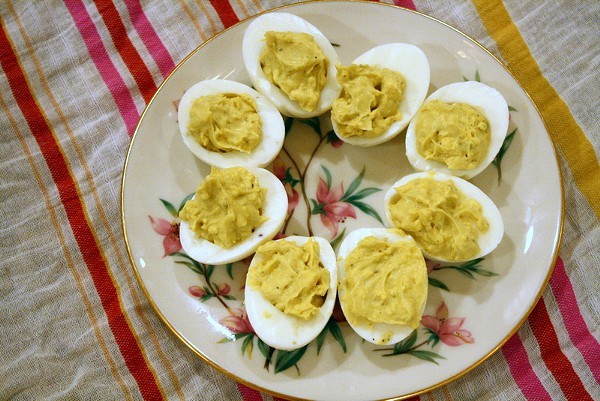 I have always been a HUGE fan of deviled eggs. I like all forms of eggs, but this way is my very favorite. Besides Easter, deviled eggs are typically served with dainty finger foods at parties. But they're so tasty and easy to make, they really can hold their own for almost any occasion.

My version is very simple and may be missing a few ingredients some other versions you've tasted. That's exactly the way I prefer my deviled eggs — simple. But additions are easy to make based on your taste preferences.

What a beautiful day for a grand opening celebration: Salud Beer Shop opens its doors today in NoDa to the public, and if you love beer, you need to check out this spot. Boasting draft (the first rotation is all North Carolina beer) and a wide variety of bottles to choose from, the bottle/retail shop guarantees you something good to sip on or take home. And what could be more welcoming than the splashes of green paint on the interior and exterior walls. Gorgeous!

The doors open at 5 p.m. and food will be provided by Three Amigos (tacos, yum!).

You know this is a business serious about beer, when you see a Facebook status update like this:

For more information, check out this blog on CharlotteRestaurantTraffic.com or visit Salud's website.

St. Patrick's Day is one of those fun holidays that I don't always celebrate. Even though green is my favorite color, there have been a few years where I have completely forgotten to wear something green, although I can't recall ever being pinched.

Celebrating the holiday has gotten much more attractive as I've gotten older — mainly when I turned 21 and learned to appreciate beer. But wearing green and drinking Irish beer aren't the only ways to celebrate this holiday. Cooking an Irish dish is also a great way to salute your Irish heritage ... or at least pretend you have a bit of the Irish luck.

Guinness and Steak Pie is an incredibly easy Irish dish that is hearty and flavorful. This version is more like a casserole because there is no crust on the bottom. 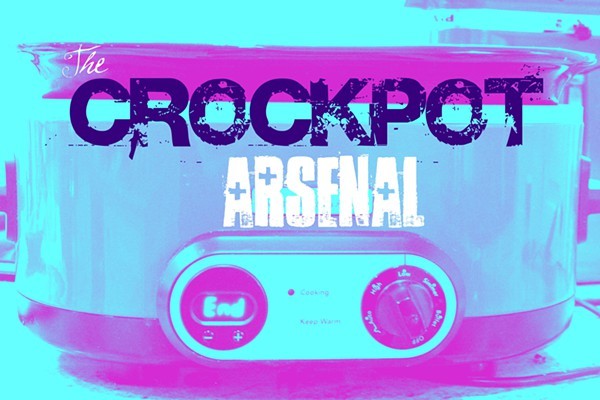 In the past month, you and I have explored the possibilities with our crockpot. We've tackled everything from soup to pulled pork.

This week, we're going to do a complete 180 this week and focus on how to make something completely different.

Something sweet and creamy. Something more dessert-like, but maybe even appropriate for breakfast. 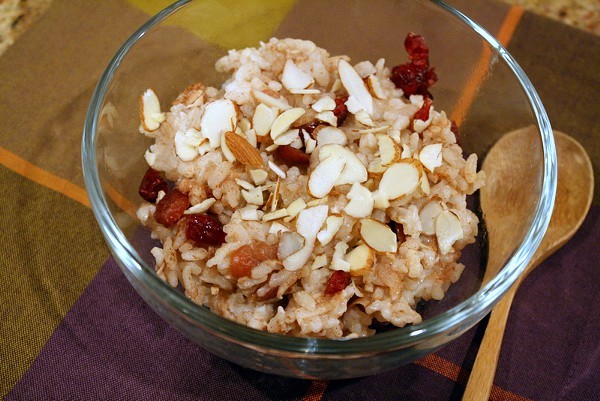 Have you tried it?

I have to admit, I've only recently went over to the rice pudding camp. It's one of those things like bread pudding (also AMAZING!!!) that just sounded kind of "edible but not incredible" to me.

Boy, was I wrong.

Events Yelp's Passport to NoDa for the food and drinks

NoDa is known as the arts district in Charlotte, but in recent years, it's become a pretty heavily frequented neighborhood for the food, beer and good times. I'm sure it's not just because I moved to the 'hood, either.

On Thursday, March 8, Yelp kicks off its Passport to NoDa, a 10-day neighborhood spotlight encouraging folks to come hang out. While there will be shopping and good times, if you're reading this on Eat My Charlotte, you're more concerned about the food and drinks, am I right?

First off, you should definitely head out to the jump-off event on Thursday, a food truck rally, from 5 p.m.-9 p.m. Twelve food trucks will be hanging out in different parts of the neighborhood, including The Chop Shop and The Dog Bar. (More info here.)

Sunday, March 11 will be Brew Day, where you can take tours of NoDa Brewing and Birdsong Brewery. (Read more here.)

On Tuesday, March 13, sample bites at some of your favorite NoDa restaurants during a progressive dinner. The four locations are Cabo Fish Taco, Crepe Cellar, Revolution Pizza and Tasty Yo — all delish spots! You can expect to pay $5-$10 at each location, which includes an alcoholic or nonalcoholic drink, and you must RSVP.

To read up all of the shenanigans, good times and offers associated with Yelo's Passport to NoDa, click here.

Fox Charlotte has the business: Check out this video.

Fans of Iron Chef America, you probably want to hit up Mimosa Grill for a reservation. Recent winner Chris Hastings will be a "guest chef" this Saturday, March 10.

If you can't tell by now, you should know that I love ethnic foods. It seems that most crock-pot recipes out there are as American as apple pie, so once again, I'm planning to shake things up again this week with something a little different.

While my belly loves ethnic foods, my heart belongs to Southern cuisine. I've been eating fried chicken and fluffy white biscuits since I got my first few teeth. But no food reminds me more of my Southern upbringing than pulled pork. I grew up eating my grandfather's, which he basted in his own homemade sauce for 24 hours. Now that's some slow-cooking.

Pulled pork is extremely easy to make in the crock-pot, which is my preferred method. While anyone can dump half a bottle of barbecue sauce over a pork tenderloin and end up with a fantastic and easy meal, let's get a bit more creative, shall we?

There are so many wonderful flavor combinations you can pair with pork. I'm particularly fond of the sweet and tangy flavors of teriyaki. If you like sweet and smoky barbecue sauce, this will be right up your alley, but also a nice change of pace. 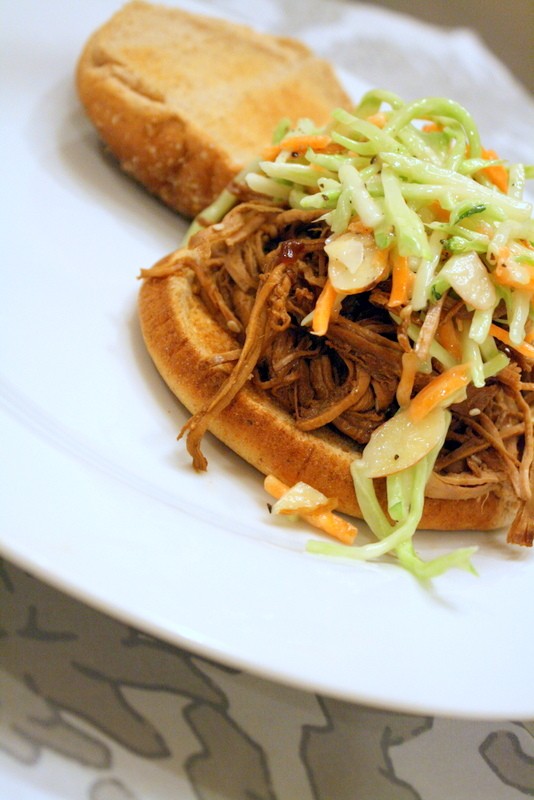