The Social Eater #hashtaghungry: The best 4th of July grubbing

Last week, wallethub.com ranked Charlotte the 7th worst city for Independence Day festivities, out of the largest 100 cities in the U.S. Their methodology was cobbled together from some combo of expected weather, swimming pools per capita and the availability of cheap three-star motels - in other words, lacking relevance. The average price of a Nathan's frank wasn't even on the list! So this week, I'm giving you nothing but the best 4th of July grubbing, from Q to shining C. Even if you don't celebrate manifest destiny and the founding fathers, everybody celebrates potato salad. 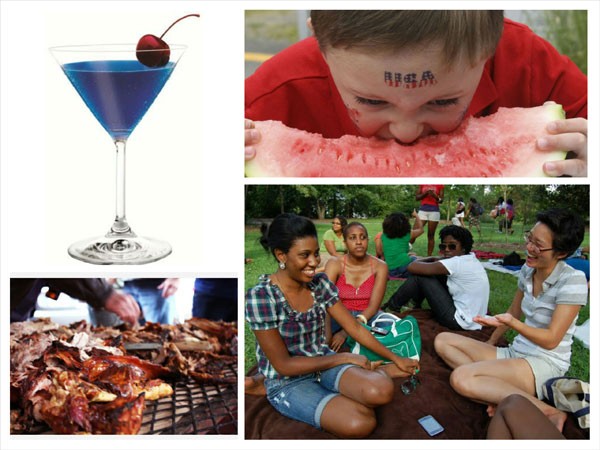 * Its reputation for hippest neighborhood may be recent, but Plaza Midwood has been bringing it for Independence Day for over a decade. The annual Plaza Midwood Pig Pickin' is 13 years strong with sales, special menus and live music all day long. Dan the Pig Man and other trucks are packing the pork along with area restaurants - LULU is featuring a $30 3-course fine swining menu, for one. My pick is the fish fry at Snug Harbor, with plates from Gastonia's Twin Tops Fish Camp and music from Hectorina, Temperance League, and AM/FMs. #amberwavesofwhiting
Free (bring cash for food)
July 4, 4 p.m. - 2 a.m.
All over Plaza Midwood

Down and Dirty Talking bacon for upcoming Bacon & Brews Cruise-In

Bacon is king. Whether dipped in chocolate, layered with lettuce and tomato, or crumbled over truffle-infused deviled eggs, it seems Americans have forgiven bacon its unhealthy reputation. After all, we're talking about a mouth-watering combination of fat, salt and crunch.

Charlotte's food scene is no exception. The upcoming Bacon & Brews Cruise-In, a benefit for the Piedmont Culinary Guild happening Sunday at Atherton Mill and Market, is proof of that.

As North Carolina is one of the biggest pork producers in the nation, "we have plenty of belly to go around," says The Asbury's Chris Coleman, who's serving as the event's committee chairman.

Each week, The Social Eater picks a handful of filter-friendly, tweetable, social media-shareable foodie events in and around the city. No #struggleplates allowed.

* That haunting wail you heard Sunday night was probably your timeline imploding over the news that Starbucks is raising its prices. No matter, it's time to try something different anyway, by way of Queen City TNT, a traveling monthly-ish latte-art competition. Bring your pitcher if you think you're the Bob Ross of baristas, or just spectate in wonderment over what can be done with a little spilled milk. #frenchpressionism
Today, 7 p.m. $5 to enter, free to watch
Atherton Market, 2140 South Blvd.
More info here. Plus, check out this cool video of a previous Queen City TNT.

Down and Dirty Going foraging with Heirloom's Clark Barlowe

"Oh wow, we got super lucky!" Our little group is no more than 50 feet from the residential street when Clark Barlowe darts off the dirt path, reaching for an overhanging branch. "I never thought we'd see these today. Mulberries."

Close on his heels, students and chef instructor Terra Ciotta from the Art Institute of Charlotte cluster under the tree to see, taste and pluck the small red berries as Barlowe explains that the pink unripe ones can also be pickled. This is just the beginning of an afternoon stroll with the chef/owner of Heirloom restaurant, who also happens to be a lifelong forager.

Heads up, y'all: A little self-promotion.

In case you weren't around last week, JJ's Red Hots released Creative Loafing's signature hot dog, the Fear and Loafing. Fans of the Frank ate 241 Fear and Loafing dogs in one week - setting the record for most dogs of the week sold! 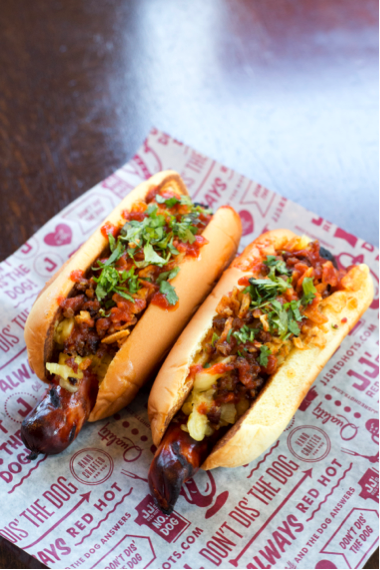 Missed out on this sweet and spicy deliciousness?! No worries. JJ's has inducted the Fear and Loafing dog into the Hall of Fame. Grab yours at JJ's!

The Fear & Loafing dog topped with bacon, crushed pineapple, Sriracha, seasoned house chips and cilantro. Best served while enjoying THIS VIDEO made by one of our staffers. Yes, one of our staff members owns a hot dog costume.

Last night, the Mint Museum hosted Allure of Flowers After Hours, a fancy foodie fundraising event that incorporated flowers into, well, everything: from the garnish on the craft cocktails to the table decor to the appetizers to even dessert. The event included a tour of Allure of Flowers: Botanical Motifs in Craft, Design & Fashion (my favorite was the bold Nick Cave piece) and a five-course dinner. Here are some (low-quality, iPhone-quick) photos. 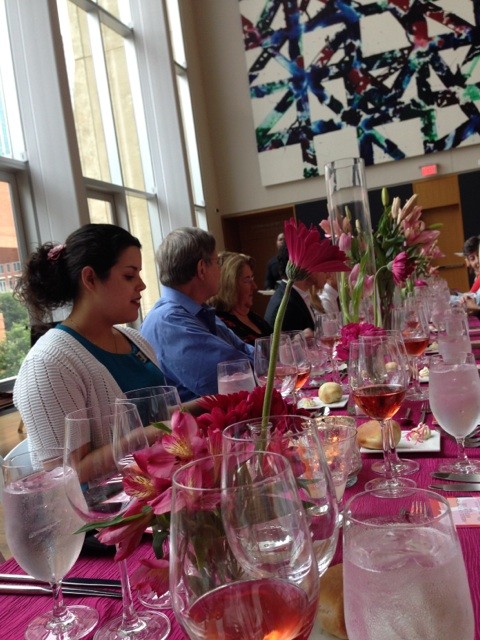 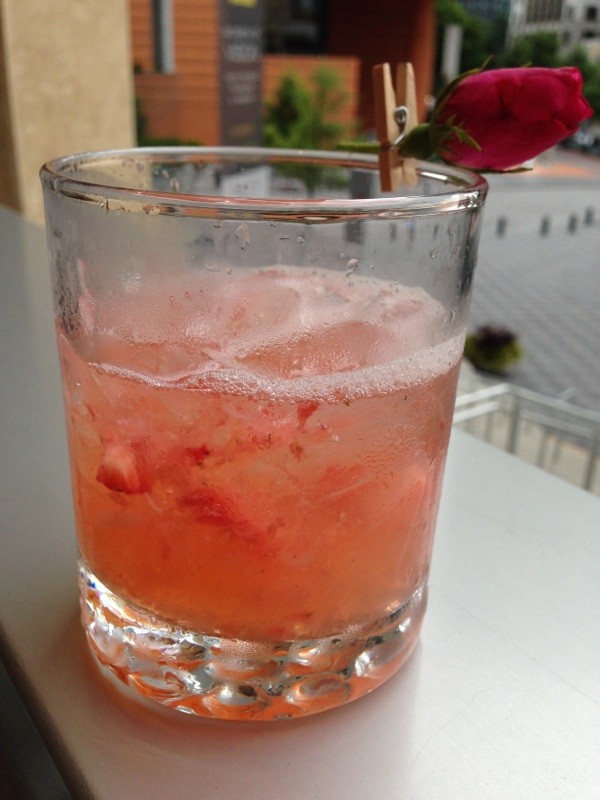 Beer Now hiring: A lover of local beer who can write about it

With the sad departure of our Beer and Loathing in the QC columnist Cam Heiliger, Creative Loafing is looking for a new beer columnist. This person will be familiar with the local craft beer scene, having watched it blow up over the last few years. He or she definitely has some opinions on what's gone right and wrong, what needs to happen to take the scene to the next level, what beers to try and avoid and so much more. Basically, our beer columnist should not be able to shut up about beer.

More importantly, this beer geek loves to write and has some samples of published work to show for it.

Send me a cover letter introducing yourself, a resume with relevant work experience and some of your writing. Also, I'd love to know what your favorite local brew is. Describe the taste for me. Make me want to leave work early for it.

Each week, The Social Eater picks a handful of filter-friendly, tweetable, social media-shareable foodie events in and around the city.

* Considering they have wheels and all, it's a little surprising that mobile eateries haven't made their way to SouthPark en masse before. At any baku-restaurant.com/rate, they've finally made it through the traffic on Providence to SouthPark Eats Alternative - the only food truck gathering in the 'hood. The rotating lineup includes favorites like Southern Cake Queen and King of Pops well as names you may not have heard, like Imperial Sandwich Co. Make a lunch date and swing through. #BetterThanTheFoodcourt
Every Wednesday, 11 a.m.-2 p.m.
5960 Fairview Road.
Check the lineup weekly at www.sea-nc.com.

As the temperature warms in North Carolina, we enter the height of culinary pleasures: fruit season. Right now, spring strawberries are ceding way to blueberries, raspberries, blackberries and that Southern star, the peach. Chefs all over town are dreaming up the tastiest tarts, pies, cobblers ... and gastriques, compotes and salsas, too.

Let me introduce you to the savory side of summer. We are all familiar with the sweet treatment of fruits, but these delectable darlings can play more than one role in the kitchen. At Santé restaurant in downtown Matthews, chef Adam Reed has done his fair share of strawberry shortcake. But he's also been serving a strawberry gastrique with his duck breast entrée.

Each week, The Social Eater picks a handful of filter-friendly, tweetable, social media-shareable foodie events in and around the city. Check out this week's print edition of Creative Loafing's SUMMER GUIDE for more things to eat and do throughout the summer.

- If remembering dance steps is too much to handle, try a different kind of flash mob. Foodie Flash Mob only requires you to get there on time and eat. Sign up for email, Twitter or text updates in advance, then watch for the location and time to be posted at noon on the day of your surprise, impromptu dinner date. Bring yourself, a friend or your whole dodgeball team. This month's eatup is a special reservation-required eatup at BRAVO! Blakeney. #goodiemob
Pay for what you eat
June 10, 5:30 p.m.-7:30 p.m.
BRAVO! Cucina Italiana, 9824 Rea Road
Reservations required. Check https://twitter.com/foodieflashmob for link and password.