Stumbled upon this on social media and felt like if I didn't share, I'd be doing Charlotte a disservice.

Tonight at Salud in NoDa, the geniuses there are pairing BEER and Girl Scout Cookies. Here's the list. It's a limited flight pairing, so you need to get there before 7 p.m.

May all your Thin Mint dreams come true as we close out this faux snow day.

Drinks Six coffee commandments if you brew at home

It’s ridiculously tempting and easy to trot into one of Charlotte’s sundry coffee shops and order your favorite mocha-latte-cappu-frappe-espresso goodness, but what about those days when the success of your wake-up/mid-morning/post-lunch mug of Joe depends on your own brewing skills? 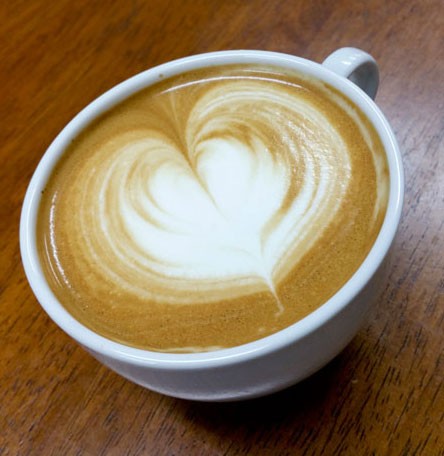 According to David Haddock of Boquete Mountain Coffee, the first coffee hot spot on this weekend’s CLT Coffee Crawl, these are his coveted coffee commandments for a five-star cup of Joe at home.

Commit
Find a roaster that you can trust. There are number of great roasters throughout the country. You just have to look for them. (Trust issue: Folgers uses scented extract to make your coffee actually smell like coffee and leaves it to stale for days before packaging it neatly for your consumption)

Beer A letter to Unknown Brewing

Dear Unknown,
Sorry for the delay in responding to your last letter, the one you sent the entire Charlotte craft beer community earlier this month. Usually I’m a bit quicker with my words, but yours made me pause. It’s clear you spent a great deal of time, energy and heart crafting your message, and I wanted to ensure my response wasn’t flippant.

First off, let me thank you for that letter. I’ve been going to your brewery since you first opened your taproom doors in November 2013 with much fanfare and celebration, and, honestly, I feel the letter was addressed to me specifically. In fewer than 500 words, you systematically addressed every previous reservation I had about your operations and your beers.

On Saturday the 21st, you’re turning 1 year old, celebrating when you started brewing on your own system instead of contracting out production. True to form, you’re celebrating with a massive party that I look forward to attending. Your redesigned taproom is destined to be slammed full of people ogling that chrome hop chandelier, as they should. You’ve come a long way from where most people first met you at your city-wide launch party events.

Is the big CLT freeze giving you cabin fever? Well, throw on a parka and brave the arctic this weekend to grab a bite at one of these local eats to warm you up. Save the snuggling for later.

Dish, located in Plaza Midwood, recommends (with no hesitation I might add) their homemade Chicken and Dumplings, served with a fluffy biscuit and a deviled egg. Now that’s some Southern comfort.

Halcyon Flavors From the Earth, located inside the Mint Museum Uptown, serves up a meaty winter dish with their Braised Bison paired with potatoes (potato pave to be exact). That’ll get your metabolism pumping and blood flowing.

Are you chilling at the house tonight on your lonesome because you're single, your boo is working/out of town or you generally do not leave home when it's below 30 degrees outside? Me, too!

Let's start a Twitter chat and watch Undercover Boss together tonight at 8 p.m. on CBS. We'll see glimpses of Gigi's Cupcakes (located on Sharon Road) on the show, and our hearts will be warmed from whatever generous thing CEO Gina "Gigi" Butler does for her employees at the end.

Food Truck Fridays recently got a bit sweeter thanks to the first and only doughnut truck in the Queen City, SUGAR. Handmade Gourmet Doughnuts. (Yes, it does have a period after SUGAR.)

SUGAR. is showing up and showing out at the EpiCentre’s Mardi Gras Celebration this evening with three themed doughnuts — bourbon-glazed, king cake and New Orleans style beignet.

Fair warning though, these homemade sweet treats are first come, first serve starting at 5 p.m., so don’t diddle daddle in traffic too long.

Owners Kathi Alexander and Cassmer Ward kick-started the business in September and have kept the road hot since, catering events all over Charlotte and working almost every weekend.

Events Raise a glass, raise some cash at Farm Hands

Do you want to help make an impact in the Charlotte community? Do you like farming and agriculture? Want to be around individuals who care about the same things you do? Like to have fun, drink beer, eat great food and watch people win some cash?

Farm Hands, previously called Funds to Farm, is a community-centered micro-funding program for beginning farmers dedicated to supporting the growth and vitality of Charlotte’s agricultural community. It is a collaborative concept aimed at creating opportunities for Charlotte area farmers while fostering community and building awareness of the challenges that our farmers face.

If we weren't cool before, we're definitely cool now — Wilson of WCCB's Wilson's World likes us!

This morning, CL sales manager Amy Mularski joined our event partners (at Bang Bang Burgers) to talk about our upcoming Moo and Brew Fest. Moo and Brew is our inaugural burgers and craft beer festival, happening April 11 at the N.C. Music Factory festival grounds, benefitting Second Harvest Food Bank. We're hella excited about it. Attendees will indulge — or overindulge? — in samplings from 40 breweries, as well as tastes from local restaurants vying for the title of "Creative Loafing’s Best Burger." Entertainment will be courtesy of — drum roll, please — Langhorne Slim, Ancient Cities and DJ Overcash.

Here's the clip from WCCB. (Note to self: If you're hungry, the first few minutes will make you hungrier.)

You know you wanna come hang out with us. Get your tickets at mooandbrew.com.

I don’t do drugs anymore, but I will eat a torta to alter my state of consciousness. In fact, this is an experience best done with friends at Tacos El Nevado, the hole-in-the-wall Mexican spot down the glorious ethnic corridor that is Central Avenue. Best known for its tacos — authentic, inexpensive and the epitome of simple cuisine done right — Tacos El Nevado is a best kept dining secret in Charlotte. Though, if you want to get lifted, the torta cubana ($8.50) is your ticket.

“If I would have opened in September, I would have had time to keep some steam going before all of the holidays fell on Thursdays, which was a negative for business,” Rondolez says. “There was two weeks where I didn’t even see my regulars.”

Despite the holiday hootenannies, Rondolez, who has been working 60-hour workweeks perfecting the place, says Rhino is off to a good start. “It’s more about where we’re situated than it is about how we’re really different.”