At Sex-Themed Open Mic, Stories Stay Unrehearsed and Uplifting | QC After Dark
Switch to the mobile version of this page.

Going down on kink culture 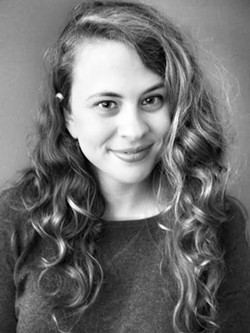 At last week's "Foreplay! Goes South," a monthly sex-themed open mic event, I heard stories about firsts. But these were not stories of the blush of youth or that first trepidatious touch. One woman stood at the microphone and told the dim and crowded room about her first experience with a glory hole, then her first experience having sex while others watched. A man talked about his first kink convention. Another shared a story about learning an important lesson: "You can ride the dick, but the dick rides back!"

With that, the room erupted in hoots and hollers, something the event organizers, Metanoia and Zoe Hart (who requested to be identified by their stage names), absolutely encourage. Before anyone takes the mic, the pair stand on the stage and explain the guidelines. "Burletiquette" rules apply — hollering and catcalling are welcome, as long as it's positive. Respect and consent are the emphasized priorities and, according to Metanoia, are fundamental to the success of the event.

"We work really, really hard to foster that type of environment –– something that's casual, that's comfortable, that feels safe and accepting."

Before the open mic portion of the night, there's an hour of informal socializing, during which Metanoia and Hart try to meet and chat with every attendee. Their efforts to build an accepting and open environment helps participants feel comfortable sharing intimate stories, whether it's their first time or their 50th.

"I think it's a really healthy thing to hear about sex and to even share your stories if you do feel comfortable, and I just love seeing people who blossom," Hart says.

The emphasis on cultivating the right environment is why the event, which started a year and a half ago, has had a challenge finding a permanent home. In April, it was held at Petra's in Plaza Midwood for the first time. The pendant lights over the bar set a sultry mood while Beyonce played over the speakers. At the bar, I chatted with a professional dominatrix. She drove over an hour to attend, but didn't come for the stories. (With 15 years of experience basically torturing people, she told me, she has enough stories to last a lifetime.) For her, it's about being part of a community and socializing with her friends.

"I'm in the kinky lifestyle and this is a kinky event."

"The stories do get very graphic, very explicit, very edgy," she says. "Which we enjoy." Hart adds that, generally, "it's a positive experience for them when they hear that. It opens a door in their mind." Kyle, who requested that I use only his first name, is a regular at the event. He says, "There's nothing I could say that would be the creepiest, weirdest thing that's been said."

Lacking any pretension or judgement, the crowd is wildly diverse in age, gender identity and sexual preferences, but most attendees are white. Before going, I had wondered how political the event would be, even though the open mic has nothing to do with politics. Lately, it's seemed sex and politics are inextricably linked. Especially in North Carolina, Kyle says, we need a venue where everyone is accepted. "We need a place where no matter what their thing is, it's OK for it to be a thing."

When I asked Metanoia and Hart about politics, they paused to consider the question. During the open mic, I could see why a connection between the event and politics didn't immediately spring to mind. The stories were raw, unrehearsed and vulnerable. They were funny, and when the audience laughed, everyone laughed together. The storytellers brought the whole room wherever they were, whether it was on a first date or being erotically mummified on a beach. As they brought the audience on their most personal journeys, the storytellers radiated joy, and the room radiated it right back. The storytellers were seen and heard and accepted. Politics seemed far away and utterly irrelevant.

Kyle calls it "uplifting." There was a lot of uplifting content, but in this case, I think he meant it figuratively.