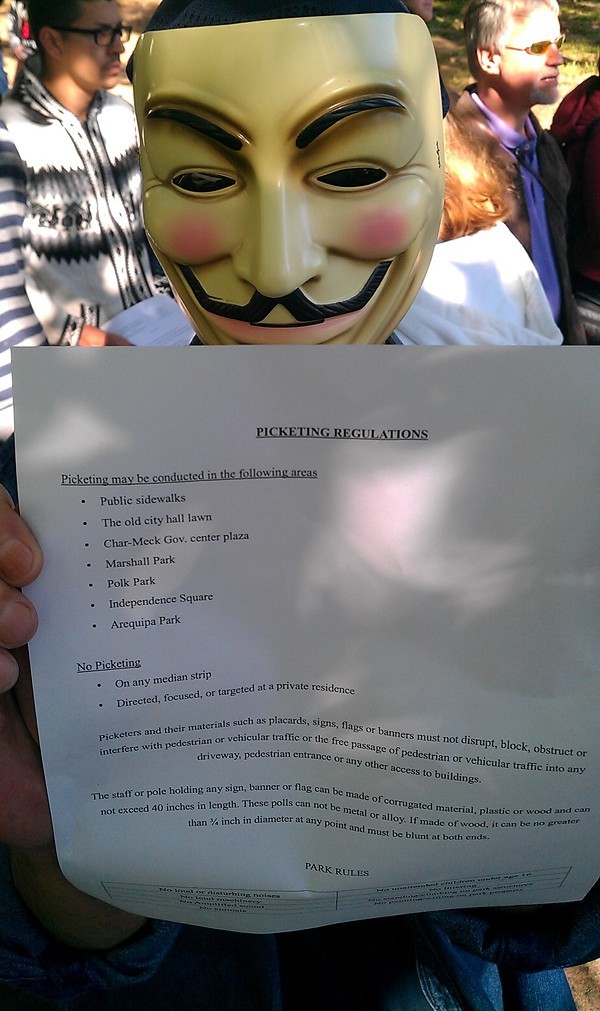 Bank of America has a target on it, thanks to its involvement in the economic collapse and its ongoing reign as the largest bank in the U.S. That's why BofA has become Public Enemy No. 1 to the newly formed Occupy Charlotte.

The local protest group is in the spirit of, and in solidarity with, Occupy Wall Street, the many-week protest in New York City that you've probably heard of by now. This past Saturday, Occupy Charlotte's 100-plus malcontents gathered at Uptown's Marshall Park to begin organizing. While together, the group decided to conduct an impromptu march, first to the Old City Hall on Trade Street and then to Bank of America's headquarters.

The organization's next protest is planned for Sat., Oct. 8. Protesters will meet at 3 p.m. at the Old City Hall and again march to BofA's headquarters.

There's been some debate (O.K., confusion) about what Occupy Wall Street and its splinter protests are all about. Over the weekend, The Daily Kos published the group's first official statement. Let me sum it up for you: The rich are getting richer, the poor are getting poorer ... and the poor aren't interested in taking the rich's abuse anymore.

There's also been some rumbling about this group being made up of a bunch of hippies. I hear otherwise, and I saw otherwise at the Charlotte rally. The group comes in all flavors: Socialist, Tea Party, Liberal, young, old, brown, yellow, white.

So, alright: the message is getting clearer. But what the mainstream media — and the people it's reporting to — don't seem to get is why it takes a minute for the group to decide what it's about and in which direction it will aim its energy. Are you ready for this? The reason is because everything is done democratically. That means the group takes time to talk to those who are involved — and to actually listen, create leadership groups, and vote.

Watching the Occupy Charlotte group begin the organization process this past Saturday was fascinating. First of all, there was no leader, and there will be no leader. There is now an 11-member General Assembly, though.

To get everyone's attention, a speaker — and that could be anyone in the crowd — simply yells, "Mic check!," to which the crowd responds, "Mic check!" From that point on, everything the speaker says is repeated. That way everyone should be able to hear.

When it came to choosing the General Assembly's membership, the group decided that anyone interested in a leadership role should write her or his name on a piece of paper and put it in a hat, and members would be drawn randomly.

Of course, the mainstream media missed all of this.

A couple of small camera crews — from channels 36 and 9 — stopped by early on for some soundbites, then jetted. They missed the election, the march and the news of the next protest. I don't watch the local news, so I'm not sure if any of the footage was aired, but I can tell you that it didn't make much of a showing online. In fact, this is all I could find: 92 words under the heading "Protestors claim to stand up to corporate greed."

So, gee, I dunno why the Operation Wall Street folks have been complaining about a media blackout. You? We'll see what happens next Saturday, if anything. (This is where I'll remind readers that when Tea Party events of any size hang out in Uptown, the mainstream media creams themselves repeatedly.)

But, don't despair, Creative Loafing was there, live — Tweeting with the protestors the entire time, and we'll be there this Saturday, too. You can follow the action on Twitter, even if you don't have an account, by following this link #OccupyCharlotte or via our Twitter stream @cl_charlotte.

Besides the news that the group has formed and will likely become a fixture in Uptown, all we've got for you is the promise of another protest this weekend, which means you need to stay tuned.

Video: "There are no women on the council." (So, the group made room and added two women.)