There have been a handful of rumors and discussions floating around the Charlotte music scene ever since Tremont Music Hall closed its doors on Dec. 19, 2015. Did the venue have to close? Could it have been sold? Can another music venue still open in the location?

We spoke with property owner Larry Hicks to clear the air and find out what's in store for the 400 W. Tremont Ave. location.

"My understanding is they're going to build a storage facility there," Hicks says. "Of course, it could be another six months." He is currently waiting to close the deal which would sell the property.

So, does that mean Tremont Music Hall didn't have to close?

"Well, they could have stayed there another month or so," Hicks says. "As long as it was open, they could have gone month to month. I wouldn't want to run a business like that though — not knowing when it would have been over with. He was there a year longer than I thought he'd be."

Hicks says Tremont owner John Hayes and the music venue were "wonderful tenants" and he wishes the venue could have remained open, but Hicks might not have been able to give much notice on when the doors would need to be shut. When concerts are booked sometimes months in advance, it becomes difficult to offer guarantees (money given up front to secure dates and fees) for concerts knowing they might have to be cancelled.

"I'm selling the property," Hicks says, noting that a new lease wasn't possible. "I'm 75 years old and I've had enough of it. I love to travel and want that building cleared off my plate so I can do other things. I've always loved Myrtle Beach."

Roaring out of the gate, Metric sailed into the one-two-three punch of the buzzing and ominous ‘Lie Lie Lie,” the bedazzled and stomping “Youth Without Youth” and the slashing and cyberpunk “Help I’m Alive.” It was only at the conclusion of the final tune’s sheets of metallic guitar that front woman Emily Haines addressed the crowd with an exuberant “Hello Charlotte!” Did I mention that she started the set dressed as a peacock?

Equal parts outlandish and stylish, Haines had strutted onstage earlier in her plumed, coal black big-bird attire, before shedding her feathers for a simpler goth-rock outfit of black shorts, black hat and black leather jacket. It made perfect sense for Metric, who play theatrical, thoughtful and tuneful modern rock - a mix of new wave, synth pop, and post punk, layered with the glam rock riffing of T. Rex on steroids. Though the band’s most recent album, Pagans in Vegas, signals a shift toward moody and introspective electronics, on Thursday night, Haines and crew were in full tilt arena rock mode.

Starting Jan. 5, 2016, we'll be premiering a new music profile series hosted by Lara Americo. Each episode in the series, which is called Untitled, will be broken up into two parts — one with a live performance a la the Tiny Desk concert series, and one with an interview.

Check out the trailer, and be sure to come back on Jan. 5 for the first episode:

Lera Lynn brought a much more mellow vibe to the city Saturday night when she and her three-piece band stepped up to the mic. In her last tour appearance before a month-long holiday break, Lynn managed to completely captivate and transport show-goers at the Visulite to another world, making everyone feel as if they were perhaps nursing a drink in ‘The Black Rose” and losing themselves to the beat.

For those not in the know, on season two of HBO’s True Detective, Lynn was often seen playing a singer in the show’s key bar room set, providing atmosphere for the hit television series and pulling double duty as a composer. Lynn almost single-handedly lends the True Detective its trademark musical atmosphere with her sultry voice.

On top of this year’s musical success from that work, Lynn ‘s second album, The Avenues, was covered by NPR’s ‘All Things Considered,’ and the record appeared in top albums of the year lists ranging from the Huffington Post to Rolling Stone magazine. To say she’s got a pretty impressive resume is putting it lightly, and that’s just from the last two years alone.

Over the summer, Charlotte rapper Lute announced that he had finished recording a followup to his stellar debut album, West 1996, entitled West '96 Pt. II: Still Slummin'. But then things got quiet. Perhaps for good reason.

Over the weekend, J. Cole released a mixtape entitled Revenge of the Dreamers II. Featured on the nine-track album is a reworked version of Lute's song, "Still Slummin'." Then came word that Dreamville Records has signed Lute to a deal.

Lute is a former member of Forever FC, the Charlotte hip-hop collective which has since disbanded. The group was also featured on Vol. 6 of CL's Homebrew music series.

Congratulations, Lute. We can't wait to see where this leads you.

Concert Announcement Disturbed, FFDP and The Scorpions to headline Carolina Rebellion in 2016

Disturbed, Five Finger Death Punch and The Scorpions will headline the 2016 Carolina Rebellion music festival being held at Charlotte Motor Speedway in Concord on May 6-8. Expanded to three days next year, the full lineup by day is: 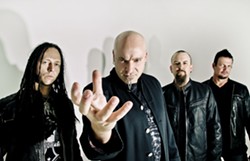 After a trio of tunes, including the luminous “People Change”, performed solo on acoustic guitar, Nick Lowe made a promise to the Visulite Theatre crowd: “We have a funny, funky show for you.”

Credit the amiable and dapper tunesmith with truth in advertising. After a jaunty ramble through “A Dollar Short of Happy,” the luchadores arrived to augment Lowe’s catchy brand of pop ‘n roll. Dressed in snappy suits and their customary Mexican wrestling masks, surf guitar slingers Los Straijackets backed Lowe on a rockin’, rubbery version of “Winter Wonderland.”

It only got weirder and more wonderful after that. Thundering drums and duel cascading tremolo guitars snaked through the rambunctious Chet Atkins-styled shuffle “Raging Eyes,” a winsome and welcoming “Christmas at the Airport” and other gems from Lowe’s and his former band Rockpile’s catalog.

Threaded through the holiday themed extravaganza were “some carefully selected toe-tappers” - Lowe’s words, not mine. Stand outs among those boppin’ rockers were the loose-limbed lament “Not Too Long Ago,” delivered with verve, reverb and passion, and a snappy yet silken “Cruel to be Kind.”

Aug. 1, 1993. Suntan Lake, New Jersey. That was the first time I saw Stone Temple Pilots live. I was home from college for the summer and a bill featuring STP, The Flaming Lips and Butthole Surfers was just too good to pass up. STP was the meat in this concert sandwich and though a light rain might have been part of it, a good number of people left after STP's set, before the Surfers hit the stage. I can still remember that show all these years later, partially because of Weiland, his megaphone and ability to capture a crowd's attention.

I saw the band's frontman, Scott Weiland, a few times after that in the Charlotte area — most recently with his band the Wildabouts at Carolina Rebellion earlier this year. Weiland also played a solo show at The Fillmore in 2013 and with Stone Temple Pilots at then Verizon Wireless Amphitheatre in 2008.

Weiland was always a stellar performer, though he was constantly the subject of drug rumors and was never really shy about battling demons of addiction. One can only speculate about the cause of death after Weiland was found dead on his tour bus last night at age 48.