Wandering around uptown Charlotte October 29, you were likely to see an army of girls dressed like Harley Quinn and guys done up like zombies. After all, it was Halloween weekend and the bars were popping. If you were to follow some of those costumed folks hanging around the NC Music Factory, however, they would have led you to an entirely different scene. Phantogram played to a packed house (full of an assortment of Halloween creatures) Saturday night and brought a new level of eeriness to the festivities thanks to their trademark sound.

The night kicked off with a solid performance by The Range, a DJ/producer based out of Brooklyn, New York. He took the stage dressed as a skeleton and amped up the crowd before the main event. The Range is known for creating an uplifting atmosphere, playing tracks of his own creation that sample artists from all areas of music. He spun his way through an hour set that included snippets of songs from everyone from YouTube musicians to the latest heavy hitters in the industry. He left the crowd hyped and ready to dance the night away for the next act up, Phantogram.

To a world that loves to categorize musical acts, Phantogram poses a conundrum. They aren’t quite electronica, not quite pop, not quite rock — they’ve essentially invented their own brand of music that manages to touch on all three with their haunting tracks. Yet they’ve made a name for themselves by forging their own path and creating music that’s just as mesmerizing on stage as on the radio.

Josh Carter and Sarah Barthel began Phantogram in 2007 in Saratoga Springs, NY. The group released their first alum, Phantogram EP, that year and gained the attention of the music world with tracks like Mouthful of Diamonds and When I’m Small. They immediately followed up their debut EP with another, called the Running From the Cops EP, through BBE Records. Carter and Barthel finally released their first full-length album Eyelid Movies a year later.

On Saturday night, a screen initially separated the audience from Phantogram. At first puzzled, the crowd soon got hype seeing that the transparent screen served as a canvas for Phantogram to paint a picture of their pulsating tracks, creating 3D effects through the use of lasers, lights and projections. The duo’s set began with Funeral Pyre, hauntingly kicking off their Halloween weekend show while their silhouettes flashed abruptly on and off the screen. Fans didn’t even catch a glimpse of Carter and Barthel until they launched into Blackout Days.

The effects were simple, but effective, the perfect complement to the ambience created by the band. Their newer sound is almost enchanting. Every song was perfectly placed to build the crowd up, culminating in the explosive When I’m Small to close out their set. They returned to the stage for a four-song encore, including their latest single that’s guaranteed to rock the airwaves, You Don’t Get Me High Anymore.

Barthel is the voice and the face of the group, and the songs on the group’s newest release especially allow her to showcase her incredible vocal range. Songs like Destroyer took the focus off of the mesmerizing lights show and allowed the focus to stay on her. Draped in a long black cape, she took center stage amongst smoke and projected flames to remind the crowd of she and Carter’s incredible musicianship. They really got a chance to shine.

Phantogram’s set only lasted about 90 minutes, but in that time they made what could have been a hokey holiday event an intriguing, enchanting spectacle. They’re incredibly talented musicians that will be back again — next time, don’t miss them. 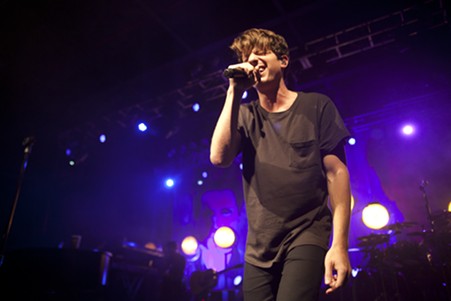 Though collaborations with Meghan Trainor and Wiz Khalifa have helped put him on the map, 24-year-old Charlie Puth proved that his own strengths speak for themselves on stage at the Fillmore on Thursday, Oct. 6, 2016.