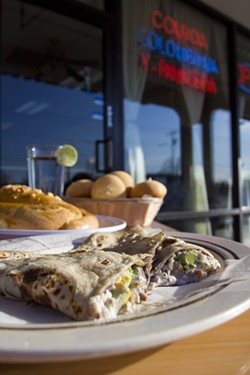 Baleadas have a lyrical name and an unforgettable taste. This Honduran street food is making its way onto more menus throughout Charlotte while its street food sibling, the Salvadorian pupusa, has already muscled its way onto even more.

Both are humble foods. While a pupusa has all the comforting components of a grilled cheese sandwich — oozing cheese and a grilled surface — the baleada, a tortilla wrap, is dependent on its fillings. Since both the baleada and the pupusa are addicting, many area restaurants specializing in Mexican, Central, and northern South American food now have neon signs advertising them. These signs serve as a beacon for those needing their baleada or pupusa fix.

One such spot is Copán Restaurant on Sharon Amity. This former fast food eatery has been many businesses. The bilingual menu, with photographs, features dishes from Honduras, El Salvador, Mexico and Nicaragua. But it is the pupusas which are the draw. Sitting at the small bar, I watched the cook in her even smaller kitchen round the corn flour dough and then quickly slap the disk back and forth between her palms. Once the dough had achieved an appropriate thinness, she stuffed it, slapped it back into a thick flat disk, sealed the edges, and then popped it onto the griddle. When it arrived, the warm pupusa had cheese spilling from within.

Pupusas are served with curtido, a coarsely shredded cabbage and carrot slaw, and salsa roja, a mild, cooked tomato sauce with hints of cilantro, garlic and Serrano chilies. The most common fillings for pupusas are cheese (pupusa de queso), and pork and cheese (pupusas de revueltas). But Copán also offers pupusa loroco, a mix of cheese and loroco, a pungent tropical flower bud similar in looks to the tip of an asparagus.

While the pupusas were fine at Copán, the baleadas were anemic. The best baleada in town can be found at Restaurant Las Americas, which opened six months ago. Las Americas is owned by Colombian native Richard Molina, who once owned Antojitos mi Colombia Bakery. Now he has moved to South Boulevard, and his restaurant, the proverbial hole-in-the-wall, features dishes from Colombia, Honduras and Mexico — and Venezuela, too (the freshly made arepas). His mother Amparo Jimenez is Executive Chef. Molina employs cooks from all the countries represented on his menu. (The daily special menu is in Spanish. The regular menu is in both Spanish and English.) The restaurant also has a small pastry case with Colombian pastries and breads.

Baleadas, the national dish of Honduras, are large plate-sized griddled flour tortillas filled with ingredients. The best eateries flatten the tortilla (slightly thicker than Mexican flour tortilla) immediately before griddling. Once the tortilla is filled, the baleada is folded and flipped. Ingredients for the filling can range from scrambled eggs to grilled meats. The stand-out baleada at Las Americas is the grilled steak with large chucks of beef mingled with even larger slices of grilled avocado, bathed in mantequilla, a salty sour cream, on a base of frijoles — a big portion of yum at a small price.

Baleadas and pupusas are a steal at both restaurants. Pupusas are around $1.50, which includes the side of slaw; and baleadas, depending on the filling, are less than $3.50. For the money, you can't beat it.