Blessed are the cheesemakers of Uno Alla Volta

The pursuit of quality cheeses put chef Zack Gadberry on a life-changing quest. 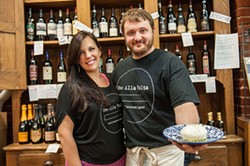 Milk, acid, salt. Three humble ingredients that, when placed in the right hands, can be transformed into something otherworldly — cheese, butterfat made blissful.

Two months ago, Vivace executive chef Zack Gadberry, 29, took this simple trinity of ingredients into his own hands to fill a need in his kitchen and inadvertently started Uno Alla Volta, an artisan cheese business that has taken on a life of its own. So much so that Gadberry will soon trade in his duties at the helm of Vivace to pursue what he believes to be his calling — that of artisan cheesemaker.

"I've always loved getting the best products and I've always had a knack for cheese, especially since we got the milk," Gadberry says.

The milk he is referring to is a nonhomogenized milk, or the kind where the cream rises to the top, from Hickory Hill Milk in Edgefield, South Carolina. It was a product that fell into Gadberry's lap from a proprietor he met while working a previous job at Customshop in Elizabeth.

Gadberry's wife and business partner, Victoria, hands me a sample of the milk on the morning we meet. It is silky and rich with butterfat, the natural fat in dairy that, when high, makes milk decadent.

"This is probably the best milk I've ever had," Gadberry says. "It makes the best cheese."

When it comes to technique, Gadberry is relentlessly curious.

"He cannot stop," says Victoria. "He reads and researches every piece of information. As a chef, he doesn't just take what he learns and applies it; he actually understands the science behind it and why things work."

Gadberry has always made ricotta at the restaurants he's worked in. When it came to the mozzarella or burrata he purchased, though, Gadberry was never happy, and, he says, it came down to one simple question: "Why am I not making it?"

This is particularly true of burrata cheese, the coveted delicacy that means "buttered" in Italian. Burrata cheese is made of a pillow-soft casing of mozzarella stuffed with a straciatella ("shredded" in Italian) filling of mozzarella and cream. The result is a decadent cheese that, when cut into, releases an indulgent, oozy interior perfect for slathering on a crusty baguette. Uno Alla Volta makes a traditional version and seasonal flavors like green garlic and black truffle.

According to Rachel Klebaur, cheesemonger at Orrman's Cheese Shop inside the 7th Street Public Market, having locally made Italian-style cheeses is a boon.

Before Gadberry, "I didn't carry mozzarella because I wasn't happy with the quality," says Klebaur. With burrata, the barriers to quality are compounded. "You have to fly [burrata] in from Italy, it endures extreme fluctuations in temperature, arriving a good one to two weeks after it is made. The cheese goes sour. Burrata needs to be eaten within 48 hours of being produced." Klebaur now carries UAV mozzarella, burrata and ricotta.

Inside the kitchen at Pasta and Provisions, the first retail store to take a chance on Uno Alla Volta, I spend an early morning with Zack and Victoria Gadberry as they walk me through the process of making their cheese. Gadberry uses fresh whole milk curd, which takes about two days to make, in his mozzarella. He pours hot salted water over his curd to create the elasticity needed to pull the cheese.

"Everyone puts all their curd in at once, but that can sometimes leach some of the fat and silkiness out," says Victoria. "Zack will literally cut just the amount he needs for one ball at a time. Although it's more labor intensive, it totally makes a difference."

Uno Alla Volta means "one at a time" in Italian, an appropriate name that reflects Gadberry's commitment to his cheese. The burly chef plunges his paws into the near-boiling water to form the ball of mozzarella. Gently, he pulls and stretches the strands of curd, called pasta filata, to create delicate layers inside each ball. He smooths and rounds the curd, dropping the finished ball into saline to create a protective skin. Thirty seconds later, I am cutting into fresh mozzarella with beautiful striations of cheese from Gadberry's exquisite technique. UAV mozzarella is flavorful, with a proper salt balance that eclipses the bland and rubbery excuses for mozzarella sold in the grocery store.

The burrata technique is similar to the mozzarella, albeit even more tender. Remember, this cheese has just a thin sheath of mozzarella, the vehicle for the creamy straciatella filling inside. Gadberry went through a lot of trial and error to master this technique, and it shows. He pulls the curd to form a thin well for the creamy center and deftly twists in one smooth motion to encase the filling into a quivering purse of burrata.

The response to Uno Alla Volta has been overwhelming. Tommy George, owner of Pasta and Provisions, had only one concern when he agreed to begin selling the cheese. "I wanted to make sure Zack could keep up with production because I knew we'd sell the heck out of it."

In just a couple of months, Gadberry has logged close to 100 hours a week between his cheese-making venture and his job at Vivace (where he'll remain through the end of June).

Where to find UAV

Una Alla Volta has already made its way into some of Charlotte's best restaurants, including Dressler's, Fahrenheit, Terra, The Wooden Vine, The Asbury and Dolce Vita. These chefs are letting their creativity go wild.

Here's what some of them are creating with UAV cheese:

- Chef Rocco Whalen at Fahrenheit is making a tempura burrata with grilled scallion pistou and a burrata and egg yolk ravolini with wood-grilled peas and olive oil.

- Chef Chris Coleman at the Asbury inside the Dunhill Hotel makes what he calls rabbit "nachos," featuring crispy tempura Virginia rabbit belly on a bed of UAV ricotta with shishito peppers and a rabbit jus.