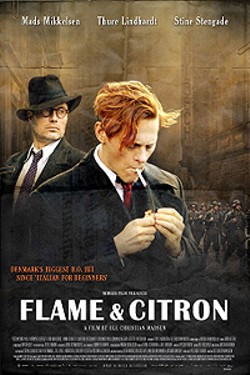 Copenhagen 1944. Denmark is occupied by Nazi Germany. While the Danish population hopes for a swift end to the war, freedom fighters Bent Faurschou-Hviid, alias Flame and Jørgen Haagen Schmith, alias Citron, secretly put their lives at stake fighting for the Resistance. The fearless and uncompromising Flame is a dedicated anti-fascist who dreams of the day when their group will reassemble and openly launch an armed counterattack at the occupying power. The more sensitive family man Citron primarily works as a driver for Flame, but now finds himself becoming more deeply involved in clandestine activities. When their immediate superior, Aksel Winther, orders them into action against two German Abwehr officers, events start to get out of hand. Flame confronts the talented and intelligent Colonel Gilbert and for the first time hesitates to carry out his orders to kill. Something feels terribly wrong.

Flame & Citron (Flammen & Citronen) is not showing in any theaters in the area.