Night of the Living Hugo

On the morning after Hurricane Hugo struck the city, we had no idea whether or not we'd publish a paper the next week. Luckily, the old Creative Loafing offices on South Boulevard, across from a convenience store we all called the Perv-Mart, never lost power. That Friday, the building became an ad hoc hangout for writers whose electricity was off. During the conversations in my office, our art critic and overall go-to reporter, John Rodgers, told an amazing story — one the rest of us agreed had to be substituted immediately for our planned cover story.

Writing under the pen name Xavier Ashe, Rodgers produced a remarkable first-hand, street-level report, detailing goings-on in Plaza Midwood and Elizabeth during one of the city's wildest nights ever. How? At the height of Hugo's fury, during which gusts of up to 90 mph winds were knocking over thousands of trees, he decided to take a long walk and, well, just look around. He dodged flying garbage cans and lumber, and was blown backward multiple times during his "nighttime stroll," while observing the greenish-yellow arcs coming from transformers as they blew, one after another, up and down Central Avenue. Rodgers was most amazed, however, that he ran into a few other souls who'd also decided to go outside and walk around.

Rodgers wrote the story in about two hours, I edited it, and we illustrated the piece with music editor Fred Mills' photos of Hugo-ravaged Dilworth, while the cover featured a shot by photographer Don Swan of a church where the steeple had blown off and stuck, point down, into the building's roof. Readers' reactions were often intense, and decidedly more plentiful than we had dreamed of. 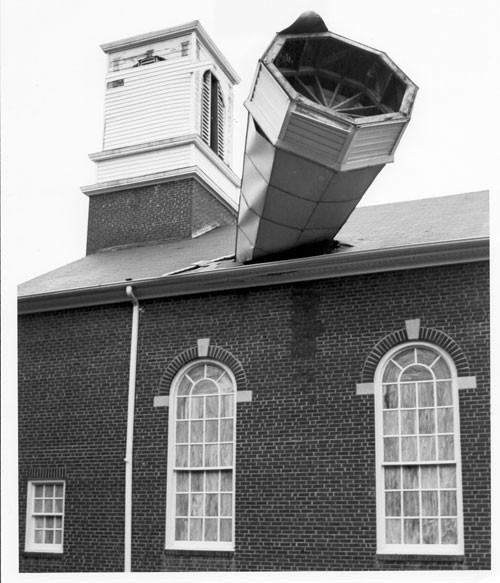