Out of the Church Closet 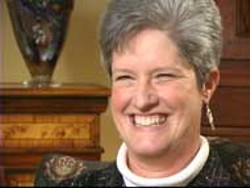 John Mayes was uneasy when he was honored as a dedicated Presbyterian youth minister. "If only they knew me, they wouldn't like me so much," he fretted. That was a few years ago, before the Charlotte man revealed to his congregants that he was gay. But it was well after the son of three generations of Presbyterian ministers began his spiritual and emotional struggle with his sexuality and his Christian faith.

Mayes' story was one of dozens captured on nearly 20 hours of tape for a 30-minute documentary that its makers hope will spark conversation about a touchy subject, and a central dilemma, among religious congregations, families and civic groups.

Coming Out - Coming In is planned for its first public screening Friday, May 20, at the Light Factory. The film, produced and distributed by the Wildacres Leadership Initiative, intertwines snippets of interviews with the three stories of couples who have struggled with their faith, identity and need to belong. It was filmed in Charlotte, Salisbury and Durham.

One man in the documentary recounts leaving his father's funeral to find an anti-gay pamphlet tucked into the windshield of his pick-up truck. Another man admits he once didn't feel worthy of worshipping. And one woman recalled a priest telling her there were many gays in the Church, and there was only one way for them to remain true to their faith. "All we ask of you in the Church is that you don't act upon it," she recalled him telling her. "I said, 'Well, that's a lot to ask.'"

The film's makers felt strongly that the gay and lesbian Christians' voices had been pushed to the margins of an often-tense debate over their role in their faith.

"The actual stories and experiences of gay and lesbian Christians was being in some ways pushed to the side in favor of more abstract debates about homosexuality and the Bible, or kind of hot-button issues such as ordination or marriage," said the Rev. Andy Baxter, a Methodist minister and executive director of Mecklenburg Ministries.

"What we wanted to do was take a step back — let's just hear from some people who are gay and lesbian Christians about what their experience is like," said Baxter, one of four William C. Friday Fellowship for Human Relations fellows who lauched the project in 2002. He, as well as the Rev. Laurie Hays Coffman, Keith Martin and Susan Acker-Walsh, executive produced the film with help from Minnow Media, a Carrboro-based video production company.

The four conceived of the project in 2002, when nearly every denomination seemed to be grappling with gay issues, whether same-sex marriage or ordination of gays and lesbians. "It was topical then, but it's even more relevant now," Martin said.

Martin knows a lot regarding the tenor of debate about gays in North Carolina. As managing director of Charlotte Repertory Theatre in the 1990s, he was near the center of controversy when controversy raged over the theater's planned production of Angels in America, the Pulitzer Prize-winning play by Tony Kushner about gay life in the age of HIV/AIDS.

Amid the furor, County Commissioner Bill James "outed" Martin — a straight, married man — on the front pages of the Raleigh News & Observer. James, no stranger to the controversy that can originate from an acid tongue, later apologized.

"I am a straight married woman with three children. If God can change the deeply held religious views that I've carried from childhood, I think God can change other hearts as well." - Rev. Laurie Hayes Coffman, senior pastor at Calvary United Methodist Church in Durham.

More recently, some people protested vehemently that Charlotte City Council shouldn't approve use of Marshall Park for an annual gay pride festival. But just this month, Mecklenburg County commissioners have debated whether to offer domestic-partner benefits to county employees — a move already undertaken, to some degree, by Durham and Orange counties, as well as the cities of Carrboro, Chapel Hill and Durham.

Martin, who recently left Charlotte to become managing director of Richmond Ballet in Virginia, says he sees many signs that the city has edged toward a more inclusive attitude toward gays and lesbians.

"Charlotte's come a long way in the last 10 years," he said. "Prior to Angels in America, I don't think I saw the word 'gay' in the local mainstream media in any other context but gay. Things that used to be whispered about behind closed doors are now discussed openly."

The film's makers have set up a Web site, www.coming-out-coming-in.net, that will have a study guide for congregations, civic groups and others who buy the DVD. Donna Campbell, whose company produced and is distributing the documentary, also has approached UNC-TV about broadcasting the documentary across the state.

UNC-TV spokesman Steve Volstad said discussion still is in the preliminary stages. "We have a considerable history working with Donna and she's done a lot of very good programs for us," he said. "Clearly anything she would like to submit to us is going to be something we take a good look at and consider seriously."

But will they be able to get their message out past the converted? Baxter said he's hopeful.

Mayes, whose interview ultimately was not used, said the non-confrontational narrative may at least make people who are "on the edge of accepting.... be inclined to at least hear our stories."

"It tells a pretty good representative point of view of gay and lesbian people in the faith community," he said.

Rev. Laurie Hayes Coffman, senior pastor at Calvary United Methodist Church in Durham, says she hopes the film inspires the kind of inner questioning that she began in the 1980s as people confided in her about their sexuality.

"My experience has been that a lot of Christians don't know a gay person — or they don't know that they know a gay person — and so they are left to create assumptions ...and kind of take the least desirable depiction of gays and assume that's true of all people," she said. "I am a straight married woman with three children. If God can change the deeply held religious views that I've carried from childhood, I think God can change other hearts as well."

Coffman has counseled many gays and lesbians who have come to her resentful or afraid that there was no place for them in the church. "It becomes a very joyful thing to watch a person who has been closeted and shielded and hidden for all these year to just kind of come alive to themselves and come alive to God," Coffman said.