Running through the pain

How Julia Lucas became the fastest woman in North Carolina 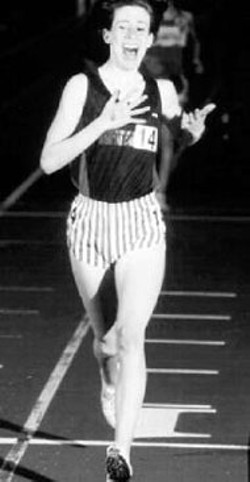 When Julia Lucas's friends encouraged her to go out for the cross country team as a high school freshman, it was so they could all hang out together and have fun. Their pitch -- "You jog around and get a popsicle at the end of practices" -- won over the then 14-year-old Lucas, whose only near-athletic experience had been riding horses. "She was not predisposed to ball sports," recalls her father Scott Lucas. "She would curl up in a fetal position if she had to do that."

Then, a funny thing happened on the way to the popsicles. Julia soon discovered she could beat everyone to them if she wanted to. "At first I was a lot slower than my friends, then I worked my way up to running with them, then I was beating them," she says.

Going fast wasn't all that enthralled her. She loved the freedom of a solitary pursuit. "It's like there are no boundaries," Lucas says, "and you're the only one you rely on. It takes focus that I've always had."

Today Lucas, 18, is one of the top high school milers in the US. On March 10, the Myers Park High senior burst into the American running spotlight, winning the mile at the national indoor high school meet in New York City. Running 12 seconds faster than she'd ever run the event, she stunned the field by finishing in four minutes, 51 seconds and 56 hundredths of a second (4:51.56), posting the second-best time nationally of the indoor season. She boosted her fame May 18 at the state high school 4A meet at UNC Charlotte, winning three events (the 800, 1,600 and 3,200 meters) and becoming the first girl to accomplish that feat in 19 years, since Richmond Senior High's Kathy Ormsby. Not surprisingly, Lucas was MVP of the meet. Topping it all off, last week, she was given the Observer's Girls' Athlete of the Year Award.

Born to self-professed former hippies, Julia has been a surprise to her non-athletic parents. Her father Scott owns a construction company and is a visual arts writer for Creative Loafing, while her mother Margaret is director of business development for Charlotte Parent magazine. Scott's father once held the high school mile record in West Virginia, but "such athletic ability skipped a generation," Scott says.

When Julia began running, Margaret remembers, "I heard from the mother of one of her friends that Julia was really good. I didn't know anything about running." Later when Julia described race strategy, Margaret glazed over. "I didn't realize anybody could talk that much about a mile," she says.

Julia has blossomed in her own right to become an exceptional performer. "She's a once-in-a-lifetime runner," says Paul Mobley, who coached her in cross country and track at Myers Park High and will coach the same sports at Hopewell High this fall. "It's her drive, her ability and what she is able to do. And her best is yet to come."

Recruited by at least a half-dozen top collegiate running programs, Lucas chose NC State because she liked the coaches and the camaraderie among the runners. She joins a Wolfpack cross country team that placed second nationally in 2001, and returns two runners who finished in the national Top 15. The track team placed 13th in the country. "As soon as she came on a visit here, we knew we wanted her," Henes says. "She has high goals, which a lot of athletes have, but more than that, she has a plan for getting there."

Lucas plans ahead because she learned the hard way. Injuries knocked her out of competition most of her junior year. "At first, her injuries made us leery about her -- they can become a cycle," Henes says. But Henes and NC State's head cross country and track coach Rollie Geiger soon realized Lucas had gained insight because of her problems. "Injuries can be a blessing at an early age," Henes continues. "Julia realizes she does need to be careful and take recovery seriously. She can't stand not to be running, so she's likely to do things in a more intelligent manner."

Overtraining, a common problem with runners, didn't bring Lucas down. It was bad luck, nutritional factors and most significantly, coming back too fast from the injuries. "She listens to her body more now," says her high school coach Mobley. "She doesn't want to break anything again."

Early her junior year, Lucas suffered a stress fracture when she turned her ankle during a cross country run. Late in the season, she was charging down a hill in the regional cross country meet when she heard a snap just before the two-mile mark. "I thought something had hit my leg," she recalls. But the fact was, her left leg had broken, and she was carried off the course. She missed the entire indoor track season and began cross-training to gain strength and lessen running's impact. After a good outdoor season, she incurred a stress fracture in her other leg, the right one.

Along the way, she discovered she had a mild calcium deficiency that likely contributed to the fractures. During her senior year, after massive fatigue hit her at key points during the cross country season, she found out she was anemic.

Such setbacks would have deterred many runners. But Lucas's competitive focus and spiritual life got her through. "I decided a long time ago I wanted to the best runner I could," she says. "With anything, whether you're a chemist or a runner, you're going to go through horrible things. You're tested. I'm a devout Christian and read the Bible every day. It's comforting to know you're not alone. Everyone is tested, but Christ is with you always."

Her competitiveness is most evident when someone suggests she can't do something. "I love that," she says. "I know I'm going to prove them wrong." She raised her academic performance her senior year (to a 4.0 average, 1340 SAT) after a weak junior year. "She wanted to be able to tell Stanford "No' -- which she did," Mobley says. Arizona State, Georgetown and Brigham Young also got rejection slips.

Lucas's biggest test may have come when she ran the mile at the national outdoor meet June 15 in Raleigh. Eager to win, but at minimum to reach All-America status, she achieved neither. She finished an underwhelming 21st.

"It was a horrible day," she says. "I felt slow from the first step." Her coach Mobley says, "She was flustered about her performance, but after a day or so, she was OK."

As with her injuries, Lucas turned philosophical. "At first, I was very disappointed and questioned whether I would have awful races like this from now on," she says. "Then you realize that every race can't be a great race."

At NC State, she'll be running with upperclassmen who are faster than she is, and she'll learn how to compete at the national level. "I'm trusting my college coaches to tell me what to do," she says. "They told me whatever I do my freshman year doesn't matter to them. That is comforting. Training there is going to be different. All that matters is that I work hard."

There's no question Lucas will do that. She learned a long time ago that she loves running and is good at it -- even without the popsicles.