Comic Afterthoughts Review: Scott Snyder's The Wake a game-changer for all its genres

It makes sense that the DC imprint Vertigo would trust Scott Snyder. His work on the Batman titles has pleased old and new fans alike, garnering him industry rewards and recognition. He’s done horror, noir and superhero books, sometimes combining all three. He was brought up to the majors, and he delivered. Otherwise, pitching The Wake could have been difficult.

It’s a 10-issue sci-fi-horror miniseries that’s set in the ocean, takes place over three time periods and features a game-changing turn (and genre flip) in the center of its run. It all works. More than that, it’s sure to make best-of lists across the board this year. As the final issue hit shelves this week, let’s take a look at the entire series that somehow works, even though it shouldn’t. Ahoy: a few spoilers ahead. 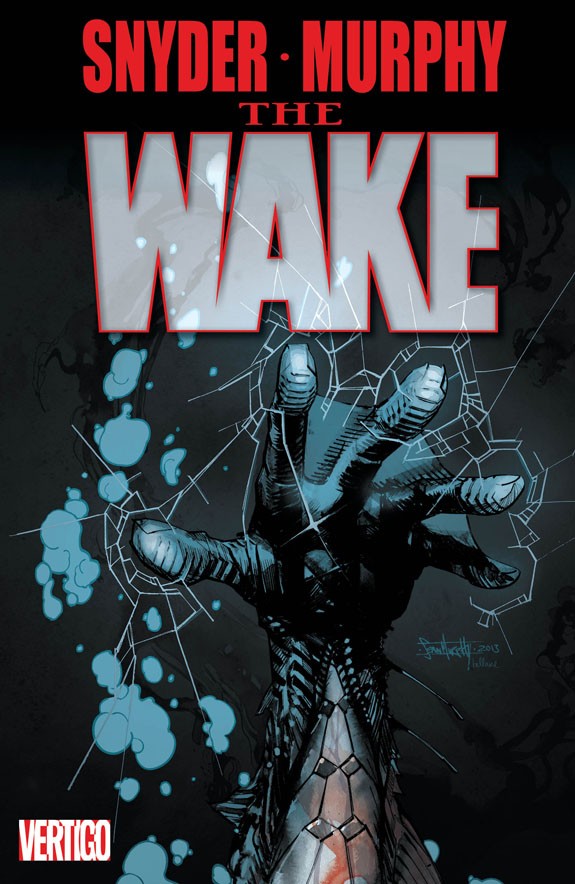 The first half of The Wake is a heavy dose of Michael Crichton with a shot of James Cameron. A team is assembled to analyze the U.S. government’s bizarre finding at the bottom of the ocean. Our first protagonist is marine biologist Dr. Lee Archer. She’s part of this crew assembled by the Department of Homeland Security, along with an old adversary from her field, a “marine criminal,” and a professor of folklore and mythology.

The beginning of the series recalls Sphere, the Crichton novel (and, later, Barry Levinson film) that collected a psychologist, astrophysicist, marine biologist, mathematician and military members to solve an underwater mystery. In the book’s case, it was a spherical object inside a spaceship; in The Wake, the object turns out to be a Mer, an aquatic animal that’s more like us than we’d ever want it to be. Except this monster can easily rip you in half, and it has venom with hallucinatory effects, which creates some of the more disturbing sequences in the book. We get to know the crew and the Mers throughout the first few issues of the book, while Snyder injects short scenes set 200 years in the future, in which a woman named Leeward travels around with her sonic dolphin.

The Mer is a “raindrop,” says the mythology professor. He’s referring to the ripple effect in folklore, which takes one real concept and connects them to legends of several cultures. He says that the Mers probably inspired myths like mermaids, Greek sirens and more. Archer thinks that it could actually be an evolutionary offshoot from our own species. Their conversation becomes a continued trend in the book. Whether it’s a major scientific plot point or a quick, “fun fact” aside, the comic's characters continue to inject real-life facts casually into conversations — sometimes during crises. When the Mers turn out to have a gargantuan parent creature, a character wonders aloud how it can be possible. “Smallest whale is eight feet long. Largest is a hundred and ten,” Archer says. It’s the kind of mid-conflict dialogue that only works in comics. The device nears exhaustion in The Wake, but regardless, the tidbits are too interesting to ignore. Don’t be surprised if you keep a Wikipedia window up as you dive deeper into the narrative. 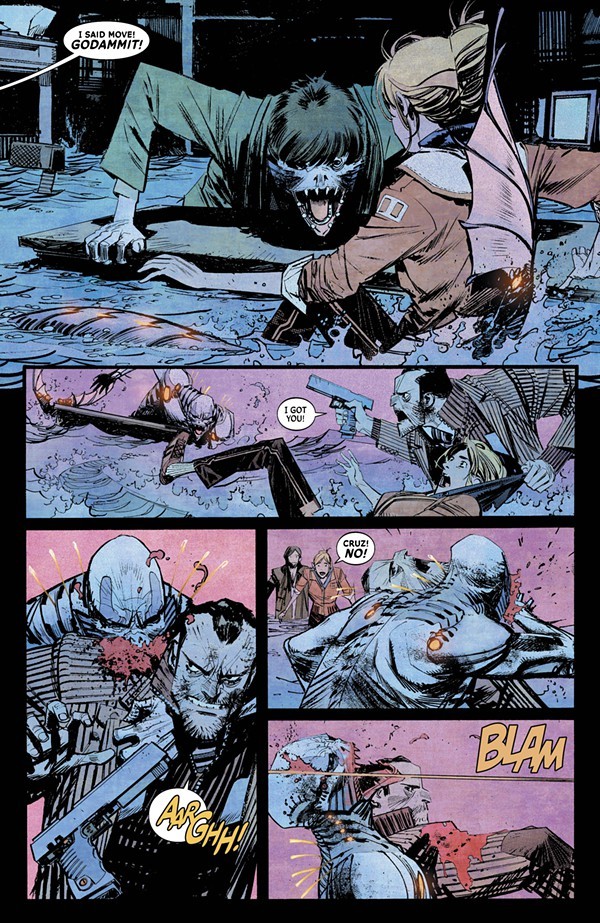 As the crew dwindles and tries to escape from the onslaught of the big Mer and his army, we begin to think we’re headed for a conventional daring escape scenario in The Wake #5.

But then, everything changes. The monsters win, and our main cast is dead. And now, we realize those brief scenes scattered throughout the first half of The Wake were more than a hint at the future. They were Scott’s previews to a new comic book that debuts with The Wake #6. The book trades Cameron-tinged sci-fi for a post-apocalyptic water world, and yes, it gets crazier. The aforementioned woman and her dolphin are now our heroes.

Our new protagonist is named Leeward. That’s not far from “Lee Archer,” the moniker of the first heroine, but obviously, Snyder has stopped caring about conventions by the latter half of The Wake. Leeward lives in a world that’s always been primarily underwater. In her time, the arch-villain is the Governess, who has a corrupt military, called “The Arm,” at her disposal. Leeward gets hooked up with pirates, seeking a voice from the past that could help save the humans from extinction. There are airships as well as whimsical explorations of this new world, and the terror of the book's halfway point turns into adventure.

But it wasn’t enough for Snyder and artist Sean Murphy to end the book with a simple, swashbuckling ending. Leeward is not only led to the long-dead Lee Archer’s spiritual plane, she finds the truth of mankind’s creation. She sees our place in the world, as well as the place of the Mers. We see Mars explode in one issue, and we get our answer to that mystery, as well as all of the book's mysteries, in the 10th issue. Everything gets wrapped up, even before readers are ready to leave this world.

The biggest flaw of The Wake is that it’s only 10 issues. There’s a recklessness to this comic, in which the phrase “anything can happen” actually means something. The creative team has said that they may revisit this world again, but for now, we can only revisit this single, strange little miniseries that tackles the biggest questions.