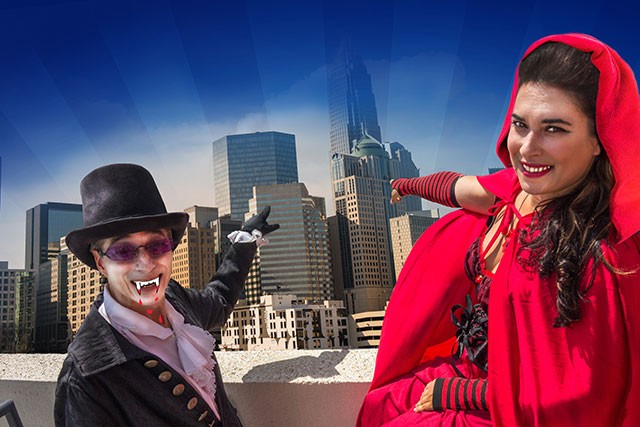 After finally getting the non-discrimination ordinance they had asked for in 2015, Charlotte’s trans community was shoved into the spotlight early this year when the North Carolina GOP went into a panic and passed House Bill 2, using fear-mongering and claims of danger in the bathrooms. Many from the local trans community have stepped up, oftentimes reluctantly, to educate the rest of us in order to counter the smears and false information.

You’d expect a local clothing company best known for its T-shirts to just feature a bunch of corny photos of millennial models rocking their tees by the Blue Line tracks on its Instagram account, but 704 Shop instead acts as the best aggregation of CLT skyline photos from local photographers.

With two popular news blogs in town competing for clicks, it was only a matter of time until someone stepped in for a satirical spin. The mysterious “A.B.” curates the account, often pulling headlines from the daily newsletters and adding a perfect bite of sarcasm. (Honorable mention: @SupportiveDude)

In a year that’s seen sentiment toward immigrants and refugees take a sour turn, ourBRIDGE for Kids has continued to valiantly serve both communities in Charlotte. Founder Sil Ganzo could easily qualify for this year’s “Local Heroine” category, as she’s quietly worked behind the scenes to improve the lives of hundreds of immigrant and refugee families in Charlotte with ourBRIDGE for Kids’ afterschool and tutoring programs, while also adovcating on their behalf. 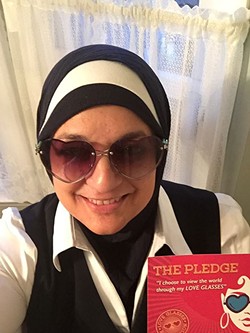 Rose Hamid was protesting at Donald Trump rallies before protesting at Donald Trump rallies was cool. On Jan. 8, Hamid was escorted out of a Rock Hill, South Carolina, Trump rally for silently standing from her seat in the stands so anyone watching could read her shirt, which read, “Salam, I come in peace.” The Trumpers must not have forgotten about her, because she was once again escorted out from a Trump rally in Charlotte eight months later for committing the crime of handing out roses to Trump supporters in the lead-up to his speech.

C3 Lab in South End bills itself as a creative hub, which is an easier way of saying that it is everything a local artist could want. An office, coffee shop, community center and studio by day, the Lab also hosts events ranging from multimedia screenings to art shows to calligraphy workshops. If it was conjured up in the right side of your brain, it has a home in C3 Lab.

Creative Loafing has never before seen the sort of response to a story that we got following our interview with Joe Gillespie, aka the Homer Thief, in last year’s Best of Charlotte issue. That response was overwhelmingly positive, with countless folks agreeing that he shouldn’t have been facing felony charges for his escapades in Homer’s costume. In June, Gillespie pleaded guilty to a misdemeanor larceny charge and got off with 15 months of probation. It’s not ideal, but it’s no felony. 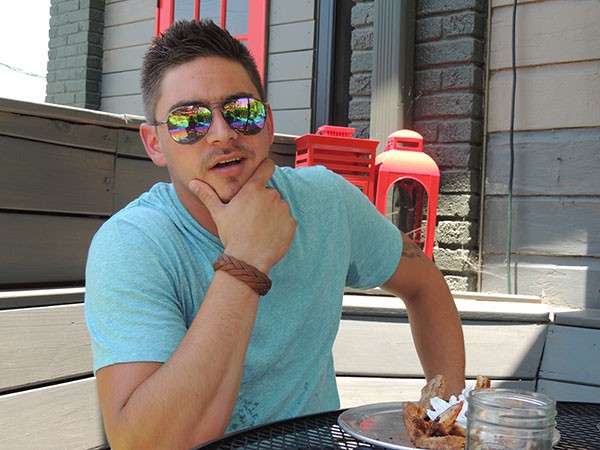 With music venues shutting down across Charlotte this year, it’s all the more important to support efforts to save one of Charlotte’s most iconic venues. In April, co-owners Jonathan and Stephanie Hughes launched a GoFundMe campaign to fund renovations needed in the 100-year-old building and 45-year-old business for it to keep going. In four months, they reached about one-third of the goal, but much more is needed. Every time a new venue closes, music fans take to social media wondering what they could have done to save it. Here’s your chance to be proactive.

Best Way To Piss Off Even The Most Tepid Vegans

In June, the Charlotte Observer’s blog/newsletter CharlotteFive ran an essay from Taylor Slaughter titled, “I’m a vegan and I ride horses. And, no, that doesn’t make me a hypocrite.” Since CF, perhaps smartly, does not feature a comments section, the ensuing chaos spilled onto social media. Slaughter was harassed by vegans from all reaches of the internet for months following the article’s publication, but took it in stride, oftentimes posting the comical things (one troll warned her that her horses have Stockholm syndrome?) with sarcastic responses of her own.

Best Way To Geek Out

Abari Game Bar in NoDa has enjoyed great popularity in its first year, and rightfully so, but a new event that began in June is geared more toward the console-loving gamers. Michael Zytkow and Jason Haynes started Potions & Pixels to cultivate their love for independent games and connect gamers from all around the city. It must’ve worked, because P&P has already expanded from once a month at Petra’s to a biweekly event in two different locations.

Best Way To Get Hit By A Car

This summer saw the introduction of augmented reality on smartphones, a trend that will surely only grow as more options become available. The sudden popularity of PokemonGO got people outside and into Charlotte’s parks and public spaces this summer, but rarely were they looking up from their phones. The game flared for a while and still enjoys an impressive following, but we’re excited to see what new worlds augmented reality will bring us into in the coming year.

Best Way To Spend The Summer

While many of their peers were stacking money with side jobs or lounging by the pool, a group of students spent 12 weeks this summer discussing advocacy tactics in a classroom at the AvidXchange Music Factory and canvassing in the sticky heat for three hours a day; all in the name of educational equality. Organizers Kayla Romero, Lula Dualeh and Meg Judy worked with 17 students — mostly college with high- and middle-school students peppered in — to “make the entire political process sexy” to the youth, as Dualeh put it.

There is no better way to strike fear in a human heart (and get clicks) than to use the words “brain-eating amoeba.” When an unfortunate young woman passed away after contracting Naegleria fowleri at the U.S. National Whitewater Center, people lost their shit. They also overlooked the rarity of the amoeba actually infecting anyone — only 138 known cases in 53 years despite its presence in most lakes and rivers in warm-weather states — and demanded answers from USNWC. Ironically, many of those same people have sat on their hands as Duke Energy’s coal ash ponds have seeped toxins into sources of drinking water. (Runner Up: Clowns in the woods)>/p>

Best Alternative Use of Charlotte Streets

On May 1, traffic-clogged streets from NoDa to First Ward opened up to pedestrians for the first Open Streets 704 event, a festival/community gathering that was sure to be the biggest block party in Charlotte history. In hopes to keep up the momentum and continue to advocate for the use of bikes and other greener transportation, organizers have already announced the next one, planned for October 23rd and reaching from west Charlotte to Historic South End.

The North Carolina Clean Energy Technology Center at North Carolina State University began the year by completing a report describing in detail how Charlotte-Mecklenburg Schools could conceivably transition completely to renewable power in the coming decades. In early February, the local Repower Our Schools coalition took it from there, pushing for CMS leaders to begin taking the necessary steps. In Creative Loafing’s story, Phil Berman, executive director of building services for CMS, assured us that the report “has been and will be part of our goals and objectives, as will driving energy efficiency.”

Those who have spoken out against the North Carolina General Assembly’s embarrassing passage of House Bill 2 include sports legends like Michael Jordan, Roy Williams and Mike Krzyzewski — who actually used the word “embarrassing.” There has remained a deafening silence on Mint Street, however, as no leaders from the Panthers organization have raised their voice against the discrimination bill. What can you say? Bigots buy tickets.

A Creative Loafing investigation in April found that about 2.5 guns go missing in the Queen City every day. We were on pace for a decrease in the total number of guns lost or stolen — compared to 1,270 in 2015 — but the number was still alarming, especially when police called a press conference a couple months later to announce a 25-percent increase in incidents in which suspects were shooting (oftentimes blindly) into occupied residences like homes and cars. Please folks, if you have a gun, lock it up.

It was cause for celebration in July when a federal appeals court struck down most of North Carolina’s racist voter ID law, passed in 2013. However, local election boards quickly picked up where the NCGA left off, passing new laws in counties throughout the state that are sure to affect the black vote. A letter acquired by the Raleigh News & Observer from NC GOP executive director Dallas Woodhouse showed him encouraging local election boards to oppose Sunday morning early voting and polling places on college campuses. 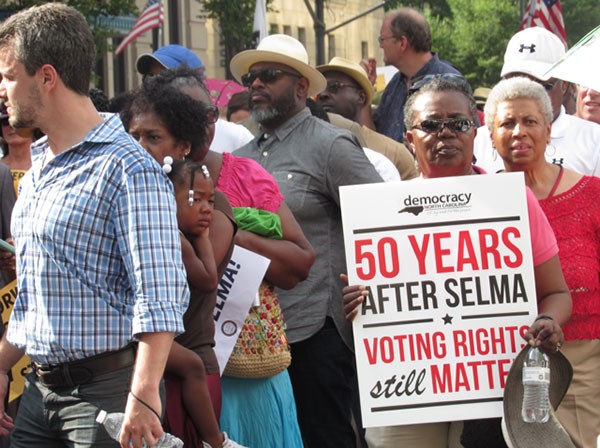 The Charlotte Observer building on Stonewall

A quick implosion would have been nice, akin to swiftly ripping a Band-Aid off a scraped knee. Instead, journalists of all stripes had to watch as the longtime home to the city’s daily came down slooowly, chunk by chunk, day after day, for approximately a month. As one former Observer employee posted on Facebook, “I was hoping for it to go down in one big boom while everyone was gathered at a safe distance and champagne corks were popping. I’m going to stick with that image in my mind. The reality is too sad.”

We still have trouble talking about it.

* Best Use of Tax Money

* Worst Use of Tax Money

Panthers go to the SuperBowl

* Best Place to Get Back to Nature

* Best Area to Live in Charlotte

* Best Place to get Hitched