Back in the 1800s, were there any black slave owners? | Straight Dope | Creative Loafing Charlotte
Switch to the mobile version of this page.

Back in the 1800s, were there any black slave owners? 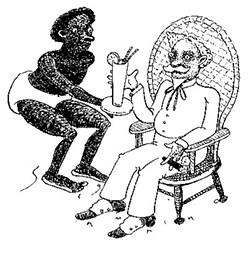 Some time ago, I heard an African-American author talk on NPR about a fact that had inspired him to write his book: During the 1800s, some slave owners in the U.S. were black. Simply put, blacks owned blacks. Afterward a historian said she'd never heard of any such phenomenon and dismissed the idea as ridiculous. Who's right?

Slave ownership by blacks certainly wasn't common, so it's no surprise you hadn't come across it before. An article published only four decades after Emancipation suggests most American blacks knew nothing about it even then. However, at one time or another, free black slaveholders could be found in every slave state. Bizarre though this sounds, most had an excuse. Let me explain the concept of benevolent slavery.

Free blacks were fairly common in the antebellum South, constituting 8 percent of Southern blacks in 1840. Most had gained their freedom through manumission (especially common just after the Revolutionary War) or been born free to a free mother. Slaves who'd been permitted to earn money in their spare time sometimes made enough to buy their freedom. Another route was being bought and freed by free relatives or friends. But some who bought slaves in this way didn't formally free them for years, partly because freedmen paid higher taxes than slaves or whites. Courts since colonial times had recognized the right of free blacks to own slaves. This gave rise to an odd arrangement in which people lived as free but were legally someone else's property. This was benevolent slavery.

Between 1800 and 1830 slave states began restricting manumission, seeing free blacks as potential fomenters of slave rebellion. Now you could buy your friends, but you couldn't free them unless they left the state -- which for the freed slave could mean leaving behind family still in bondage. So more free blacks took to owning slaves benevolently. Being a nominal slave was risky -- among other things, you could be seized as payment for your nominal owner's debts. But at least one state, South Carolina, granted nominal slaves certain rights, including the right to buy slaves of their own.

Nobody's sure how many such arrangements existed. A widely cited but imperfect source is the 1830 federal census, chosen because it supposedly represents the high point of black slave ownership. One count, taking the data at face value, found 3,777 free black heads of household who had slaves living with them. If that's accurate, about 2 percent of Southern free blacks owned slaves.

But this number could be off in either direction. It didn't distinguish between slaves the householder owned, live-in slaves he hired, and slaves who merely lodged with him. In a few cases the census listed known white slaveholders as black. Black overseers were sometimes counted as slave owners instead of absentee white planters. On the other hand, nominal slaves were often recorded as free.

In most cases, historians think, blacks owned slaves benevolently, but exploitative slaveholding by blacks did happen. Some well-off urban blacks owned house slaves, and occasionally craftsmen owned skilled slaves to work under or alongside them. Determining how often this happened isn't easy, since the census didn't consistently distinguish between nominal and actual slaves. Proof of commercial ownership can be found in advertising for runaway slaves, sales of slaves at market rates, etc. A confounding factor is that some free blacks owned slaves both benevolently and commercially. One scholar claims the majority of slave transactions by blacks in Charleston, S.C., were commercial -- but again, South Carolina was unusual, for reasons I'll return to. An analysis of Petersburg, Va., suggests only about 10 percent of black slaveholders owned slaves commercially, which was probably typical. Sure, slavery is slavery, but what we're talking about is a far cry from the plantation field slavery you might have imagined.

We do, however, need to acknowledge a less common form of black slaveholding. Whites in Louisiana and South Carolina fostered a class of rich people of mixed race -- typically they were known as "mulattoes," although gradations such as "quadroon" and "octoroon" were sometimes used -- as a buffer between themselves and slaves. Often the descendants and heirs of well-off whites, these citizens were encouraged to own slaves, tended to side with whites in racial disputes, and generally identified more with their white forbears than black. Nationwide maybe 10 percent of the mixed-race population (about 1 percent of all those identified as African-American) fell into this category.

Some of these people owned lots of slaves. How common was this? Let's define "lots" as 10 or more in a household, bearing in mind that sometimes those with many slaves were still benevolent owners. (One man benevolently owned 18 relatives on the eve of Emancipation.) In 1830, 80 percent of blacks who owned 10 or more slaves lived in Louisiana or South Carolina. I won't say it wasn't weird, but there were only 214 such owners nationwide out of 320,000 free blacks.

Comments, questions? Take it up with Cecil on the Straight Dope Message Board, straightdope.com, or write him at the Chicago Reader, 11 E. Illinois, Chicago 60611.