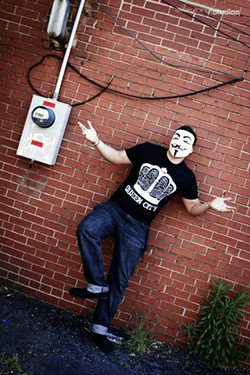 You're a designer and you've been given a task: Envision the ascending bass-heartbeat of electronic dance music (EDM) — riddled with its fast-paced tempo of repetition and space-like synthesizers — screen-printed on a T-shirt. How would you conceptualize a music genre into a clothing line?

Local designer Drew Burdick, 24, approached the task by creating a two-dimensional robot named Mr. Mayor. Sporting a toothy grin and headphones, the image emblematizes EDM's extraterrestrial vibe. From that, Billionaires, a music-fashion hybrid apparel line based out of Charlotte, was born.

"During the initial mascot development phase," Burdick says, "we threw around quite a few ideas, none of which really fit as well as a robot. I personally love robots. Since robots are so entrenched in EDM culture, we decided to head in that direction."

By creating a clothing line that uses EDM as its inspiration, Burdick taps into a niche market. Tiesto's appearance at Phoenix earlier this year and the Identity Festival held over the summer, among other EDM events, brought out hundreds of people who are passionate about trance, house, bass, techno, dubstep, etc.

While there are a number of clothing lines that target the culture, few use high-quality materials and stay away from cliche graphics. In turn, the response to Billionaires has been overwhelming. There are currently more than 25 DJs and EDM promoters across the Carolinas — such as DJ Complete, Aaron Sigmon, Top Down Productions, GenXGlow and Bass Records — who endorse the brand.

Aside from creating a product ravers wear to represent their scene, Burdick says the Billionaires line opens up the door to talk to people who aren't familiar with EDM. "Even Britney Spears' latest album is heavily EDM-influenced," he says. "A lot of people have this misconception that EDM is just techno. In the early 2000s, there's that song by Eminem where he says, 'Nobody listens to techno.' People have this idea that techno is bad and it's for Europeans."

For those not engaged in the EDM culture, Burdick describes it as a close-knit community. "You go to events and people are really friendly," he says. "It's easy to get to know people. That's what stuck out to me: the difference between people who go to these kinds of events as opposed to say, like a rock concert. A term that gets thrown around a lot by raver kids is an acronym, PLUR, which means Peace, Love, Unity, Respect. Ravers have this mutual understanding that we're all here to have fun, enjoy the music, not hurt each other."

The screen-printed designs of the Billionaires line vary and are of limited quantity, but examples of graphics include Mr. Mayor carrying a bag of cash, the human heart with branching arteries, a traveling maze cutting across the shirt's chest and experimentation typography spelling out "Underground" or EDM-centric lingo such as "House Trance."

Most, if not all, of the Billionaires T-shirts, and newly offered ladies tanks, are printed on soft and breathable American Apparel products (50 percent cotton/50 percent polyester). A majority of the tees come in gray and white with a select few colors incorporated within the graphics.

"Each tee is part of a limited set of 40 to 50," Burdick says. "This is something that really adds to the overall brand and the exclusivity of each design. Once a particular color scheme has sold out, it will never be sold again. This is an added perk to owning one of our one-of-a-kind tees, because they become more of a collector's item rather than just a piece of clothing."

The Billionaires apparel line is available online at www.billionairesapparel.com. Burdick and his team are also out weekly, promoting the brand at local EDM events around the Queen City, such as Bass Church at The Fillmore and Wobble House Wednesdays at Twilight Cafe in University.