BOOM Charlotte Revs up for Year Three With Taproot and Others 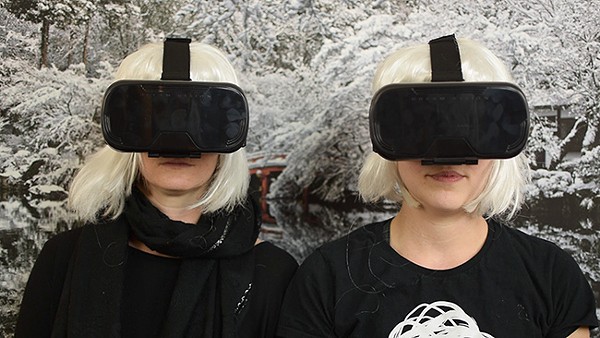 Salena Mable Stamp is instantly recognizable in her Taproot T-shirt as she enters the Roasting Company on Central Avenue, flanked by two of her Taproot cohorts, Yessena Whitfield and Shakeela Mays.

"I wore the T-shirt so you'd spot us quickly," Stamp says with a grin.

The members of Taproot CLT are headed to rehearsals for their upcoming show, What Future Is It Now?, which they'll perform at this year's BOOM Charlotte, the third installment of the city's beloved fringe arts fest held at spots throughout Plaza Midwood.

Despite some scary weather — Stamp narrowly avoided a fallen branch on the way over — several other Taprooters have now begun making their way into the rotisserie to talk with me about BOOM and the state of weirdness in Charlotte.

Camerin Watson, one of Taproot CLT's founding members, arrives with Jessica Stewart, and we're soon joined by two newer members, Kizzy Alexander, aka Kizzy Kashay, a veteran of Chicago's storied Second City Improv group, and Kevin Patterson, an indie filmmaker who inadvertently found himself performing with the group after he was asked to produce a filmed sequence for its show.

"We didn't tell him that he was signing up for a lifetime commitment to Taproot," Watson quips. 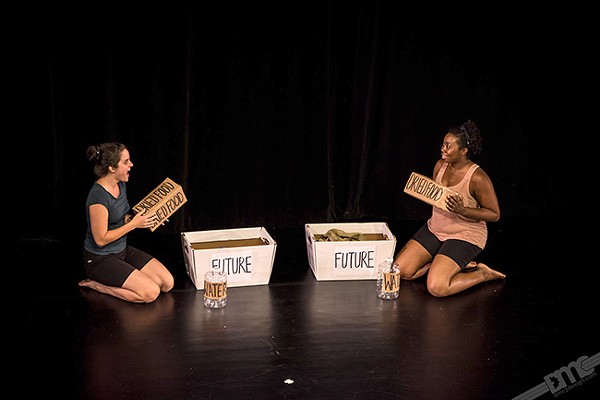 Taproot's 45-minute piece will debut at Petra's Bar on Friday April 20, as part of BOOM's three-day celebration of art and performance. The piece began as an improv dance work conceived as a duet for Stamp and Mays. Watson saw it and recommended they expand it into a larger and more fully realized production. The result is a surreal look at a reality show of tomorrow, a comment on society's obsession with images and ideas about the future, whether utopic or dystopic.

The dark comedy explores possibilities both likely and unlikely, while examining some very human situations. A successful career woman, played by Whitfield, has everything she ever wanted, but is alone and longs for an idealized companion. Two astrophysicists, spying a potential world-ending threat, argue over the best way to handle the approaching apocalypse. A filmed sequence depicts the wonders (and hazards) of a life lived virtually. The scenarios are sci-fi stories of working people, or people working through outrageous situations via theater and dance.

What Future Is It Now? asks us to take a deeper look at the undercurrent of weirdness beneath the slick veneer of Charlotte, the banking and development town — a look just below the surface of its money-making grin, its manicured lawns and neo-marble. Beneath all of that is a river of strangeness that only experimental and avant-garde artists can get to. Those are the folks who ask the important questions: Why do we do what we do? Why do we punch the clock? What's at the root of our dreams?

These are the questions that Taproot CLT and the other artists who are part of BOOM Charlotte pose, and they pose them not only through theater and dance but also through music, visual arts and more.

For their part, Taproot's history dovetails with the BOOM festival. The group started in 2012 as a genre collision of dance and theater. Watson and her creative partner Brianna Smith wanted to do original performance art, something "experimental and collaborative, without adhering to any genre," Watson says.

The pair's earliest performances were pop-up happenings around the Uptown area during the Democratic National Convention.

"We were calling them random acts of culture," Watson remembers. 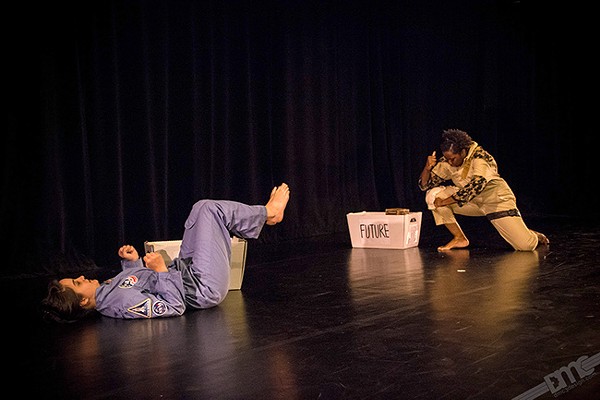 From there, Taproot attracted others who wanted to get involved. Mays, a graphic designer, joined in 2013; both Whitfield, a dance instructor, and Stamp, an upstate New York college graduate also who handles programming at the Blumenthal, joined the following year. Whitfield says she was moved to join after seeing Watson and Smith perform a structured improv piece that used audio from Dr. Martin Luther King, Jr.'s "I Have A Dream Speech."

Watson and Stewart also serve as co-collaborators with Manoj Kesavan, founder of the non-profit Que-OS, which curates BOOM Charlotte's performances. He's the genial and passionate heart behind the BOOM festival, which aims to bring collaboration to the city's art scene by offering constructive challenges to what's become stale established systems.

"So many of our institutions work out of a place of control and exclusion," Kesavan says. "The future is going to be directed by newer platforms, grassroots organizations, and BOOM is a reflection of that."

Kesavan arrived in Charlotte as an architectural instructor in 2003, and found a conservative environment that he felt was creatively stifling. But it woke in him an instinct to nurture and preserve the weirder elements of his surroundings.

In 2012, he and Faron Franks landed a residency at the McColl Center to do an Open Studio, bringing together a range of designers, artists and members of the community to work collaboratively on projects of broad interest and impact.

It was during that period that Kesavan began to observe the nature of creative establishments, and what it meant for artists working in a modern urban world.

"Often it's about the investment, and where the money goes," Kesavan says, "and therein lie the priorities."

The generally slow-moving nature of 21th century curating establishments often means new ideas take a long time to reach the mainstream. But not all artists are waiting for the world to come to them, and those are the artists that were attracted to Que-OS and later the BOOM festival — artists like Taproot CLT.

What Kesavan, Watson and all who are involved in BOOM Charlotte propose is a new model of patronage and curation. BOOM fills a void left by a world that has moved too fast into the future without adjusting its focus on the people living in it.

What Que-OS and BOOM provide are collaborative spaces for artists to find one another, work together, and promote each other's works — all while providing true and constructive commentary and challenging critiques of the world in which we all live and love and work.

Watson agrees. "A lot of [theatrical] companies in Charlotte are figuring out ways for artists to maintain their creativity, while also maintaining financial stability — all the while keeping things fun and creatively inspiring," she says.

Hard-hitting, pragmatic millenial optimism is a hallmark of Watson's worldview — and of Taproot CLT. Recently, co-founding member Smith moved away to Austin, Texas, where she started a sister Taproot group, Taproot Austin. (Ironically, in this particular case, Charlotte led the way for a city it once longed to be more like. Back in the mid-2000s, after Austin launched the "Keep Austin Weird" movement to remind the tech companies arriving in that city of its historic creative community, Charlotte started its own similar, though slightly less confident "Make Charlotte Weird" movement.)

At first, some members of Taproot CLT were concerned when Smith left the Queen City. "When Bri took the hiatus and moved away, we weren't sure if we could go on without her," Stamp remembers. "But it's turned out fine, and the energy is still great."

The strength in the troupe is its flexibility. With members such as Jessica Stewart also engaged in administrating and curating alternate BOOM events, the idea was hatched to film some of its sequences.

"This is the only kind of group I've ever seen that gets together to rehearse based on who's available," Watson says with a laugh.

As the arts continue to cross-populate around Charlotte, there are endless future possibilities for further collaborations among Taproot CLT and other performance collectives, such as XOXO, which also will perform at this year's BOOM fest.

"I'm really excited to see other artists involved, as well as the pop-up installations," Stewart says.

If it weren't for the genre and media collisions that Que-OS and BOOM encourage, Kizzy Kashay says, she wouldn't have known fringe art collaborations could happen in Charlotte. "I had no idea this even existed, or was possible," Kashay says.

Stamp agrees. "Before Que-OS and BOOM," Stamp says, "the dance world wasn't really privy to the theater or comedy worlds, and likewise."

Nowadays, it's possible for an actor to join a group of dancers and create a sci-fi performance piece based on reality TV — and the possibilities beyond that are limitless.

"The weirder, the better," Watson says with a grin.