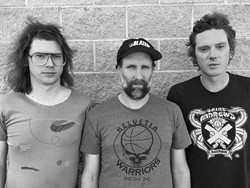 When: Wed., Sept. 21, 8 p.m. 2016
Price: $20-$25
After more than two decades as a band, Built To Spill was faced with a serious case of burnout when they hit the studios in 2012. The solution? Two of the band members left and frontman Doug Martsch filled their shoes with two eager musicians — Jason Albertini stepped up on bass and fellow Boise native Steve Gere on drums. The new lineup resulted in 2015’s Untethered Moon, a revitalized followup to the band’s 2009 disc.