The keeper of soul

Richardson, who splits his time between his primary residence in Louisiana, and a house in South Carolina, is talking about the hard work and sacrifices he endured to make it in the music business, and how that has culminated in his induction in the North Carolina Music Hall of Fame. Along with John Tesh, Chris Daughtry, Dolph Ramseur, The Hoppers, Luther Barnes and Blind Boy Fuller, Richardson will be honored on Oct. 18 at the Gem Theatre in Kannapolis. Richardson, who is scheduled to perform at the ceremony, says he was floored when he heard he made the list.

The 41-year-old singer-songwriter is no stranger to recognition and awards. Since launching his solo career in 1999, the Monroe native has captivated audiences with his soulful brand of R&B, a deft and heartfelt balance of rolling gospel delivery and urban hip-hop grit.

He's garnered three Grammy nominations, and in 2010, he received an ASCAP Rhythm & Soul Music Award for writing and publishing the song "There Goes My Baby," which topped the R&B/Hip-Hop Music Charts. But this show of respect from Richardson's home state is different.

"For me it's bigger than the Grammys," Richardson says. "I love North Carolina, and to be recognized to this degree means everything. No one will be able to take my name off that honor. The history will always be there."

Richardson's history starts with his immersion in music at an early age. His mother's gospel group, The Wondering Souls, had a seismic impact on Richardson. He started singing at the age of 4, hitting the Carolinas' gospel circuit with his brothers in the quartet, The Willing Wonders. When he was 13, he befriended and started performing occasionally with Cedric and Joel Hailey, who subsequently found fame as Jodeci and as K-Ci & JoJo.

"We've been like brothers ever since," Richardson says of K-Ci & JoJo. "They're a part of my history from that point on until forever."

Inspired by his good friends' example, Richardson launched the urban contemporary group Undercova. He secured a record deal with Tommy Boy Entertainment in 1994 and the group's song "Love Slave" landed on the soundtrack to the 1995 film New Jersey Drive. But Undercova's ride proved to be anything but smooth, Richardson remembers.

"With the other members, the group wasn't their passion," he says. Nurtured by producer Todd Ray — who performed as T-Ray with the rap group the White Boys — Richardson learned the ins and outs of record production. While he and T-Ray put in long hours to perfect the record, the other members of Undercova often wouldn't even show up at the studio. "The group never really got out of the gate," Richardson says, adding that the label shelved the deal.

Richardson rebooted his career as a solo artist, releasing his debut Country Boy in 1999. Richardson's oeuvre continued in a semi-autobiographical vein with 2:35 PM, named for the time when his son Souljah was born. For his 2009 release, Facts of Life: The Soul of Bobby Womack, Richardson paid tribute to one of his influences and inspirations, in the process earning two Grammy nominations. Around this time, Richardson also discovered that he had acquired the title of The Soul Prince. 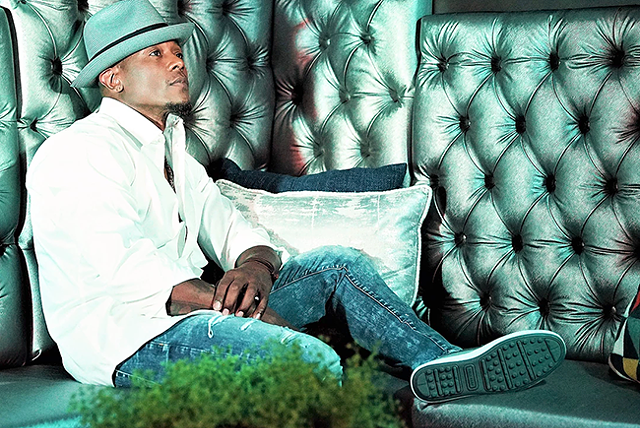 "That came from an article somebody overseas wrote about me," Richardson says. The impromptu title derives from Marvin Gaye's nickname, The Prince of Soul, Richardson continues.

"[The Soul Prince] kind of stuck for me," he says. "So I figured I'll keep it and try to live up to that standard." It made sense, since Richardson had already been honoring classic soul with his body of work. His most recent album, 2017's All Or Nothing has received nearly universal praise as an accomplished return to classic soul. Richardson cites Al Green and Bobby Womack as early influences, and he feels their music is both timeless and relevant today.

"I am today's keeper of yesterday's soul music," Richardson proclaims. When a classic soul song comes on the radio, Richardson says that he has to stop what he's doing and just listen. "Not only can I hear it, I can feel it," he explains. "That's what soul music is supposed to do. It touches into something that's below the surface level and gets into your heart." While Richardson's commitment to the old-school groove of Donny Hathaway and The Gap Band is unquestioned, he's equally at home with a modern hip-hop vibe. Richardson says he has no difficulty in reconciling the two schools of music.

"A lot of artists sample from back in the day, that classic soul era, and turn it into hip-hop," he maintains. "Although soul and hip-hop are different, I don't think they're that far apart." For his part, Richardson strives to imbue whatever kind of music he makes with an innate soulfulness that stems from his personality. "Whatever it is, it's still coming from the same source." Richardson applies the same approach to create material that has been performed by other artists including Angie Stone, Charlie Wilson and Raphael Saadiq. Richardson stresses that he just writes songs, and that it is up to each individual artist to put their stamp on them.

"I got into writing for other people through Kay Gee of Naughty By Nature, " he explains. "[Kay Gee] had a lot of projects he was working on [where] people wanted songs." Even "There Goes My Baby," which was recorded by Charlie Wilson and subsequently went to No. 2 while garnering a Grammy nomination, was not developed with any specific performer in mind, Richardson maintains.

Even though the song had a dramatic effect on Wilson's career, Richardson says that he and Babyface originally recorded the song for an album that never came out. While Richardson came into the music business a performer and writer, he has also placed equal emphasis on producing.

"It's been very rewarding," he says. "I went in that direction because I had a particular sound in my head. It was where I wanted to go."

Richardson credits his current love for producing to his days of learning the craft from T-Ray. "He knew how to tap into who an artist was and try to bring that out. He'd nurture the artist." After Richardson's label bought out T-Ray to get him out of the picture, they started moving Richardson around from producer to producer, he remembers.

"[The producers] weren't interested in nurturing anything," he continues. "They were all about what they brought to the table — what was on their resume. So I had to learn to produce in order to get back to me." Richardson bought his own gear and taught himself how to record and engineer his own sessions. It's all part of becoming self-sufficient, he believes, a practical strategy for succeeding in the music business.

"To be a successful artist, once you've honed your craft, you have to learn the business," he maintains.

He believes his career did not truly flourish until he got a handle on the ins and outs of the music business and was able to chart his own course forward. It may well be the integral piece of the puzzle that has allowed him to create a body of work that has drawn the attention of the North Carolina Music Hall of Fame.

"It's a great thing to have talent and be able to produce and perform," Richardson concludes. "But you'll be in a much better position if have all of those things plus be on top of your business."