Can liquor be used as an emergency antiseptic? | Straight Dope | Creative Loafing Charlotte
Switch to the mobile version of this page.

Can liquor be used as an emergency antiseptic? 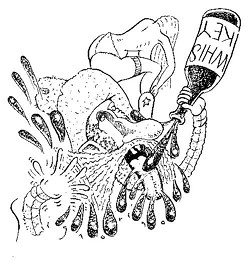 I think wine and beer have some microorganisms in them, but their alcohol concentration must make them sterile, right? That's why they can be used as antiseptics in an emergency. Or so goes the urban legend they taught us in medical school (full disclosure: I'm an MD). I've never used liquor for this purpose myself, but I still wonder: is it true? — Mario A. Ortega

I'm glad to hear you've never needed to try this, Mario. You know your camping trip really isn't going well when you find yourself hoping to stave off sepsis with a six-pack of Icehouse. However, since the thought apparently tempts you, let me clarify: when they tell you in med school that something is an urban legend, the takeaway is supposed to be DON'T DO IT, SCHMUCK. But not to worry. When the SD team gets a chance for a little experimentation with alcohol, no way we're passing it up.

Ethyl alcohol, or ethanol, kills germs by penetrating cell walls, destroying the cellular proteins and enzymes, and dehydrating the cells. Getting the right concentration is important, making it potentially tricky to use commercially available beverages for disinfection — their ethanol content ranges from 3 or 4 percent for light beer to 95 percent for grain alcohol. Ethanol's effectiveness as a disinfectant also fluctuates widely depending on the target microbe, method of administration, and so on.

For example, a 50 percent ethanol solution needs 15 minutes to kill E. coli bacteria and 45 minutes to kill strep in a "cooked-meat broth," but just 20 seconds to wipe out pneumonia and strep bacteria on a glass thermometer — presumably a less hospitable environment. Several common bacteria can be killed off in less than two minutes with 70 percent ethanol, and 35 percent will slay some fungi in a minute flat. The stuff also kills many viruses, including HIV, but at low concentrations the job may take hours.

You might suppose the higher the concentration of ethanol, the deadlier the result. Not necessarily. It can take longer to kill strep with 95 percent ethanol than with lower concentrations, possibly because high levels can coagulate the proteins on the outside of the cell, sealing the interior off from greater damage.

Some bacteria are resistant to ethanol, notably the genus Clostridium, responsible for such conditions as botulism, gas gangrene, and tetanus. Soaking bacteria that cause gas gangrene in 90 percent ethanol for an hour has almost no effect, and tetanus can survive ethanol exposure for up to 18 hours

You're thinking: fascinating, I'm sure, but I still don't have an answer to my question. One concedes this. Time to head to the lab.

To build up a healthy glow of natural bacteria, my assistant Una volunteered to go for two days without bathing or changing clothes, meanwhile getting sweaty via sessions of fencing, chores, and animal handling. (I didn't ask.) Her fellow assistant Fierra then swabbed four sweaty areas of Una's body (back of the knee, stomach, sole of the foot, and groin) for bacteria. These samples were transferred to agar gel in order to establish Una's baseline grottiness.

Separate small areas of each region were then washed with distilled water, red wine (Chianti, to be precise; 12 percent ethanol), blended Scotch whiskey (40 percent), and Everclear (95 percent). A swab was scraped across each washed area and applied to more agar gel, for a total of 20 petri dishes of goodness. All the bacteria were cultured for three days at 76 degrees Fahrenheit.

• Una's knees were amazingly clean, with only a single bacterial colony growing from the raw sample and no other colonies showing up after any washing. Seriously, you could eat dinner off Una's knees.

• Her stomach samples grew 11 colonies raw, three when washed with water, and none when any alcohol was applied.

• The foot samples showed seemingly random results, with wine washing resulting in the most colonies (18) and the raw sample having the fewest (2).

• The samples from the groin — yowsah. The raw sample had more than 200 colonies, many intimidatingly robust. Washing with water resulted in about the same number of colonies, but they were smaller. Wine washing resulted in the biggest and most abundant colonies, even more than in the raw sample. Whiskey, in contrast, cut the number of colonies roughly in half; Everclear cut it down by three-quarters, plus the colonies were small and slow-growing.

1. Whiskey, the favored antiseptic for wounded cowboys out on the lone prairie, really is reasonably effective. Let's hear no more about urban legends, med school know-it-alls — this is rural fact.

3. Wine generally makes things worse, so you modern cowpokes who shun whiskey in favor of a good pinot noir can kiss your effete butts goodbye.

4. Their enduring popularity notwithstanding, groins are pretty gross.