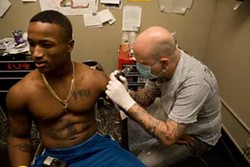 Remember when tattoos only adorned the bodies of bad-ass bikers?

You'd be driving down the highway and hear the roar of Harley Davidson pipes, and as you turned to your left, there was some bald, yet bearded man revving his hog with an arm full of tats. (And of course he was sporting a red heart with the word "Mom" going down the center on his forearm. As scary as he looked, at least you knew he loved his mother.)

Nowadays, it's hard to find someone who doesn't have a tattoo. Sitting in church, you can see ink peaking through Sister Betty's dress. And if you look closely, you'll spy the hint of a design on the back of the preacher's neck.

From bank executives to writers and yes, bad-ass bikers, it seems as if everyone has a tattoo.

That said, they had to get the ink from somewhere, right? You can find a smattering of tattoo shops scattered around Charlotte -- some on main thoroughfares and a few others off the beaten path. Inside these shops, the artists who design everlasting art are as diverse as the images they create.

Crown Custom Tattoo and Piercing Studio is abuzz with activity in the afternoon. A couple of women flip through poster-sized sketchbooks welded to the wall. A quiet man dressed in jeans, Vans and a wife beater enters the shop, looks around then leaves. Is he afraid to go under the needle -- or is he an undercover agent checking to make sure that Crown owner Derek Crockett isn't cutting someone's penis in half?

Crockett has been investigated by the State of North Carolina because, sometimes, he does more than just ink a design on someone's shoulder. He's often called to implant metal studs in arms and pierce nipples. He used to bisect tongues, too; unfortunately, that's against the law and is considered practicing medicine without a license. When he found out he was breaking the law, he stopped ... but not before people started talking about him. Crockett's motto is: If people are talking about you, then you're famous.

Crockett got into tattooing while he was in college. "I was a biology major, and I didn't want to be a neurosurgeon. I wanted to be an artist. I had to figure a way of making a living as an artist that would be successful. I came across, by chance, a tattoo magazine in Charlotte and I read a 150-word article written by a female apprentice. And from that moment on, it was full force," he says as he sketches a design of stars and vines for a client waiting to get her first tattoo.

Crockett says his family wasn't too thrilled when he decided to sack college to become a tattoo artist. He was the first member of his family to graduate high school in a long time, so telling everyone that he was going to be a tattoo artist caused some relatives to flip out.

"Some of them even refused to speak to me for a year. But once I started making a living at it, four years later, they started wising up," he says. "Hopefully, I'll tattoo my mom one day; she has a wild side, and she's been talking about it."

For Crockett to learn how to become a tattoo artist, he had to leave his home.

"I lived in a state [South Carolina] where, at that time, it was illegal to tattoo, so I had to leave ... to learn the trade," he says. "I finally moved up here when I was 21. I've basically been here ever since. I love this town."

"I was the inventor of microdermaling," he says. The process involves placing items underneath the top layer of skin. He placed a number of photographs online to advertise the service, and it took off.

But another procedure offered by Crockett -- his work of sticking horns in peoples' heads -- has caused a lot of controversy.

"Animals have their own language. There is really no difference between what we do and what [animals] do. Except that we're the only creature that modifies our bodies. If you tell that to some crazy Bible thumper, they'll be like: 'It's still satanic.'"