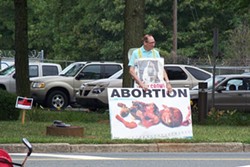 By most accounts, the mood outside Family Reproductive Health last Saturday was decidedly less contentious than what has come to be the norm. A temperate and slightly overcast morning made an easy backdrop for an anti-abortion protest as about a dozen demonstrators stood, signs and Bibles in hand, just behind the "Do Not Trespass" signs that mark the south Charlotte clinic's property line. A few protesters called out to women and men passing in and out of the clinic: "Miss, you don't need birth control," a man called out to a woman exiting the building. "You need to put our Father in heaven in control. You need self-control!"

Unlike most weeks, such messages weren't aided by an amplifier, and the protests passed without incident. "It's real nice and quiet today," says Charlotte-Mecklenburg Police Sgt. James Stephens, surveying the relative quiet. "This is unusual. This is the way a picketing is supposed to be."

The week before, however, had been a different story -- one that ended in warrants, a restraining order and accusations of theft. That Saturday, June 9, capped off what clinic owner Deborah Walsh says are rising tensions between demonstrators, clinic staff and patients. Walsh had grown weary of protesters whom she says flout the city's noise ordinance. So she walked to the grassy area where Philip "Flip" Benham of Operation Save America and other demonstrators were congregated and asked to see their noise permit. They refused.

Video shot by a clinic staffer from the building's entrance shows Walsh then leaning over the equipment. She says she was trying to turn it down; protesters accused her of trying to steal. A scuffle ensued, and Walsh was knocked to the ground as she tossed a small piece of sound equipment.

Was she pushed? Walsh says so, and she points out bruises on her arms. She says Howard Scott Heldreth pushed her to the ground and wouldn't let her up. Heldreth was out of town this Saturday, but protesters say he didn't push her. They contend Heldreth was simply trying to protect the group's property.

"He grabbed her arm," says James Dellinger of Concord. "Scott grabbed her so she could not steal our stuff."

Dellinger says Walsh has stolen from the group before. Walsh says police had instructed her that the law requires they hold their signs; otherwise they can be trashed. "I was in the presence of police doing what I understood to be lawful," Walsh says. (Stephens says the law appears ambiguous, but officials now believe protesters don't have to carry signs as long as they're at least 11 feet from the road but aren't past the 20-foot mark where Walsh's property begins.)

Walsh believes the decibel level of the protesters' sound system, which broadcasts their message of damnation and murder through the clinic's walls, isn't just illegally loud but deeply upsets patients and staff.

Protests have been common at Family Reproductive Health for years. But Walsh says she's grown more fearful as the tenor of protests have gotten more contentious, particularly within the last two months. Protesters have made comments about at least one staffer's home that couldn't come from public information available online, she claims, and Heldreth's wife, Kathy, has indicated she also knows what Walsh's house looks like. "I'm always looking over my shoulder," says Walsh.

That's why, she says, she's obtained a restraining order against Scott Heldreth, although as of Saturday he hadn't been served. As of press time, Heldreth was listed as having a warrant against him on charges of assaulting a female. His wife, Kathy, also had an outstanding warrant related to the incident.

Scott Heldreth made national news as the father of a nine-year-old boy who -- on March 25, 2005 -- attempted to take water to Terri Schiavo, the severely brain-damaged Florida woman who lay for years in a vegetative state as relatives fought over her fate.

Original reports painted a simple portrait of a boy and family committed to pro-life causes, until liberal bloggers and The Charlotte Observer revealed (in an article printed March 27, 2005) that Heldreth was a registered sex offender in Florida and Illinois. Heldreth, as a 19-year-old transient in Ohio, was charged with the rape and kidnapping of an 18-year-old college student, according to an Ohio University student newspaper article. He was convicted in April 1993 of sexual battery but was released after about six weeks in prison. (He is not listed in North Carolina's registry because it only requires the inclusion of offenders convicted on or after Jan. 1, 1996. His inclusion in Illinois' registry will last longer than the original crime required, according to officials, because he failed to notify authorities of a change of address.)

Walsh is concerned that the women's clinic, which also offers birth control and other gynecological services, doesn't command the protection and enforcement that's afforded less controversial businesses. "I'm a legal business," she says. "It's just so frustrating and infuriating. It's as if the rules don't apply. We need help from the community."

Stephens says the clinic isn't treated differently than any other legitimate business. "I can assure you that the police service she's been getting, she'd get whether she does abortions or not," he says. "Obviously, there's been some people hurt and there's been some people killed at clinics across the country in the past. We're there to keep peace. If somebody breaks the law, we're going to take whatever action that we have to take."