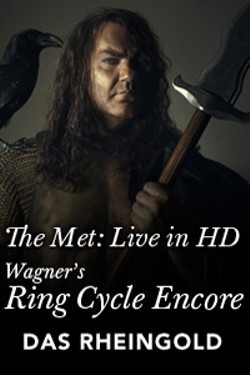 An encore performance of Wagner's Das Rheingold will be shown in select theatres on Wednesday, May 9, 2012, at 6:30 PM in all time zones. Conceived by Wagner as a prologue to the Ring cycle, Das Rheingold sets forth the dramatic issues that play out in the three subsequent operas. Gold from the depths of the Rhine River is stolen by the dwarf Alberich, who uses it to forge a ring that will give him unlimited power. The theft sets in motion a course of events that will eventually alter the order of the universe. Bryn Terfel as Wotan, lord of the gods, heads the cast.

Das Rheingold: Met Opera Ring Cycle Encore is not showing in any theaters in the area.