On Friday, Oct. 5, few things going on in Charlotte will be bigger than the Dead Prez show at Amos Southend, because the duo of Stic.man and M-1 are likely to shake our city's hip-hop scene to its foundations. 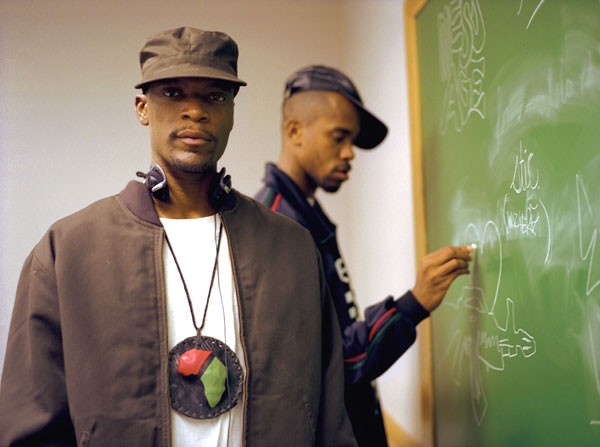 Presented by the Knock Brothers and Dupp & Swatt, this "really dope music festival" will feature opening acts Kil Ripkin, Jerk Styles, DJ Tommy Tom, The KBZ and live artwork, but the headliner alone will be worth the price of admission.

For more than a decade, Dead Prez has been shocking modern hip-hop culture with its controversial lyrics, revolutionary ideals, radical imagery and fiery stagecraft. In many ways, the group has carried the torch of Public Enemy, delivering conscious and uncompromising rap music for the 21st century. Dead Prez has stayed true to its words, crafting music in an unpretentious manner that is more like a movement than a day job.

Discovered by Brand Nubian's Lord Jamar, Dead Prez gained underground street fame from the duo's notorious live performances and having songs appear on soundtracks including the basketball doc Soul in the Hole and indie poetry film Slam, which starred Saul Williams, the renaissance man behind The Inevitable Rise and Liberation of NiggyTardust! Then in 2000, Dead Prez released Let's Get Free.

The album ranks with P.E.'s It Takes a Nation of Millions to Hold Us Back and N.W.A's Straight Outta Compton for helping to change the way young hip-hop heads looked at the world. The lyrics were laced with Pan-Africanism, anti-establishment black and poor man's populism and even healthy eating.

The track "Hip-Hop" became Dead Prez's most popular song; the instrumental was even used as the intro for Dave Chappelle's TV show. The original version became an anthem, with powerful lines like, "You would rather have a Lexus or justice/a dream or some substance/a Beamer, a necklace or freedom/still a nigga like me don't playa' hate/I just stay awake."

Four years later came RBG: Revolutionary but Gangsta, a solid sophomore effort of lively jams, and Prez has followed with several successful mixtapes that saw the duo working with figures from DJ Lantern to the Outlawz. Pulse of the People: Turn Off Your Radio Vol. 3 was a particularly interesting installment from Dead Prez that didn't receive the fanfare it deserved.

After Barack Obama became president, many rap artists became fanboys, able to turn their eyes away from urban poverty because they liked the man in charge. We don't get such blind obedience from Dead Prez, who attack globalization with the same raw vengeance their forebears used to take on police brutality.

Now, the group has another album, Information Age, scheduled for online release on Oct. 16, so expect plenty of new tunes at Amos'. And considering all this country is going through, new blood from these guys couldn't have come at a better time.