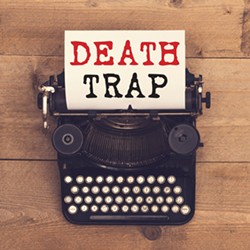 When: Sundays, 2-4 p.m. and Thursdays-Saturdays, 8-10 p.m. Continues through Oct. 14 2018
Phone: 704-892-7953
Email: boxoffice@davidsoncommunityplayers.org
Price: $12-$20
www.davidsoncommunityplayers.org/index.php?p=home
Seemingly at ease in his charming Connecticut home, Sidney Bruhl, a successful writer of Broadway thrillers, is struggling to overcome a "dry" spell which has resulted in a string of failures and a shortage of funds. A possible break in his fortunes occurs when he receives a script from a student in the seminar he has been conducting at a nearby college--a thriller which Sidney recognizes immediately as a potential Broadway hit. Sidney's plan, which he devises with his wife's help, is to offer collaboration to the student, an idea which the younger man quickly accepts. Suspense steadily mounts that