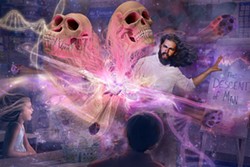 It seems fitting that photographer Sean Busher experienced a moment of what can best be described as divine inspiration when he came up with the idea for his newest project, The Descent of Man. Busher explains that he occasionally sits in a darkened room of his house room with a journal and lighted candle to meditate. During one of these sessions, the idea just came to him. "I couldn't let it go," he says. "It was singing to me."

Busher, a Charlotte native, invested more than 1,000 hours in the project over the last five years. The end result, which is on display at Wedgewood Church in Charlotte until Nov. 27, is a series of eight 6-by-4 backlit transparencies that explores the ramifications of Jesus Christ returning to Earth to teach evolution.

The exhibition is meant to commemorate 100 years of evolution being taught in public schools, and was partly inspired by the famous Scopes Monkey Trial in 1925, during which a science teacher was sued for teaching evolution.

Busher hopes the surreal, CGI-enhanced images — which depict everything from a courtroom drama to Jesus walking past angry protestors — will help spark discussions about science and spirituality, and if the two can coexist.

"I wanted to give voice to people stuck in the middle of the two extremes who believe science provides a framework for which we can discover and expand our understanding of the universe," he says.

Chris Ayers, the pastor at Wedgewood Church, echoes this sentiment.

"Any theology which ignores science is sticking its head in the sand and is deficient and dangerous," he says. "Christians who say 'evolution is just a theory' are in denial. Unfortunately, the church, throughout much of its history, viewed science as an enemy and has been slow to adapt to science. Wedgewood seeks to set an example as a liberal, progressive, science-informed congregation."

Busher says he doesn't adhere to any single organized religion, which he feels often leads to groupthink.

"It's other people telling you what you should believe," he says. "Everyone's search for the truth is individual. I think all the labels in religion do a disservice because they close us off to exploring other ways of thinking."

Busher has always had a strong independent streak, in both his personal and professional life.

He studied photojournalism at the University of North Carolina at Chapel Hill, but discovered that as career it was too restrictive and confining.

"I'd run into these other photographers who just seemed beat down," he says. "They'd have to do things like shoot the same parade every year. Another guy had to keep moving to find a job, and eventually he just gave up and joined the Army. That wasn't the career path I wanted."

After Busher graduated college in 2001, he moved back to Charlotte, and landed a couple freelance gigs.

"I did exactly what they poo-pooed in journalism school," he says. "I started shooting weddings and for weekly magazines. But it helped me buy more equipment and get my business rolling."

Partnering with CGI artist Peter Godshall, Busher produced the Find Your Center project for the Charlotte Center City Partners, which consisted of a hyper-realistic panorama depicting nightlife, sports and dining in uptown Charlotte.

Last year, to herald the return of The Light Factory — a nonprofit gallery and photo education center in Charlotte — he recruited nearly 140 volunteers to simultaneously photograph a 15-block stretch of Tryon Street.

He used Photoshop to combine the individual images into a single, 100-foot panoramic. Busher called the project Moment Mile, and it was exhibited at the Mint Museum Uptown.

Of all his projects, Busher says The Descent of Man is his most personal.

To produce the eight images, Busher orchestrated multiple photo shoots at various locations, including a local school and the Mecklenburg County Courthouse.

He also recruited dozens of volunteers, most via Facebook, to serve as models for the various pictures. Busher and Godshall also worked long hours creating a CGI prison and other cool imagery for the project. Busher himself portrays Jesus.

All the creative and technical wizardry will hopefully strike a chord and get people talking, Busher says, which is especially important here in the Bible Belt, where religion remains a hot-button topic.

"The Descent of Man feels like the first time I've really put myself out there in a grand way that says I'm an artist and I'm willing to take a stand behind a message," he says.