From show to show, no one transforms like Julie Rowe 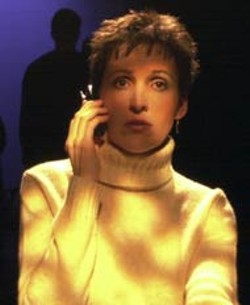 In the constellation of Tampa Bay area theater artists, St. Petersburg's Julie Rowe is surely one the brightest stars. In the last two seasons at American Stage, she's had three important roles: Josie Hogan of A Moon For The Misbegotten; Sarah Daniels of Spinning Into Butter; and, currently, Claire in David Auburn's Pulitzer Prize-winning Proof. You could hardly find three more different characters, and only with great difficulty could you find one actress who could persuasively play all of them. But that's what Rowe's done: superb, just about impeccable work as earthy, unwashed Josie; urban, nervous Sarah; and orderly, bossy Claire.

Unlike those actors who are always playing themselves, Rowe genuinely transforms for each role, seemingly leaving her true personality back in the dressing room, and becoming the character envisioned by Auburn or Eugene O'Neill or Rebecca Gilman. Watching Rowe in all these parts, as well as in smaller roles in Shakespeare in the Park, you can't help but wonder who she really is, and how she manages her metamorphoses. How does Julie Rowe do it?

I sat down with Rowe at American Stage one recent afternoon with this question in mind. We met in the office she uses as the theater's education director — she could never get by just on her acting salary, she says — and I had a chance to experience the woman behind the artist. She's articulate, self-deprecating, funny — with a ready laugh — and sans a trace of vanity where her talent is concerned.

In fact, that may be the secret behind her transformations: she has no egotist's attachment to her "actual" character, and is willing to become what a script requires — to "dive in," as her admiring director on Proof, Kate Warner says. Of course, willingness to transform isn't nearly enough; it also takes great technical skill to give up one's own reflexes in favor of a fictional character's. But Rowe possesses that skill in abundance, as local audiences have learned.

Rowe says, somewhat surprisingly, that her acting technique mostly involves "personalizing" a character after first researching it. "I'm such a library nerd," she says. "For example, when I was scheduled to do Moon, I was very excited and I spent a lot of time researching O'Neill and reading his other plays. I like to do a lot of research on the playwright, any kind of writings they've done, any historical references within the text… Sometimes I'll create family trees and personal background for myself. Then I look through and find points of personalization so that I can bring experiences from my life history to enable me to make it more tangible."

But how she can "personalize" three characters as widely different as Josie Hogan, Sarah Daniels and Claire? Rowe says that it's simple: "Claire's the caretaker, she's exceedingly organized, exceedingly efficient, and the calming voice. I myself am a bit of a caretaker, a bit of an organizational freak, and also [capable of] the passive-aggressive behavior she has a tendency to have."

As for countrified, coarse Josie, she explains, "I related very well to Josie's life experience because I grew up on a farm. The women in my family, my grandparents, my grandmothers, just were workhorses, workhorses, and just struggling and struggling and taking care of everybody and doing everything for everyone."

Rowe says she could play Josie's self-doubt because "I, Julie, have thought, I'm not pretty enough for that, I'm not smart enough for that. I think every person has a doubt about some semblance of themselves."

As for academic, emotional Sarah Daniels of Spinning Into Butter, "Well, I know what liberal arts colleges are like; I know what university structure is like; I know what it's like to feel different, to maybe have an unpopular opinion and hide it," she says. "… I also — I, Julie — have a fiery temper: As a kid, I slammed my door so many times, I broke it, so I know what it's like … And when [Sarah] was talking about working at the other university where she was the minority, I grew up feeling a minority because I was a creative child in a rural area, so I would say I pulled on that."

About that rural area: Rowe, 37, is originally from Idaho, raised on a potato farm. "I grew up in an area that had very little access to the arts," she says, "and I was always into music; I was a piano player."

She went to Idaho State in order to stay near her voice teacher, and took an acting class "for the fun of it," where she discovered that she loved performing. She went directly from college to the marketplace: summer stock in Montana, a tour with Nebraska Theatre Caravan, and "a terrible dinner theatre contract in Wisconsin."

Following a boyfriend to Las Vegas, she worked backstage for Siegfried and Roy as a dresser, then moved to Minneapolis where she performed at several theaters. Inevitably, she moved to New York City, where "I learned a lot; it was kind of hard on me too, I was able to really figure out quick what I'm good at, what I'm not, what I need to improve, what I'm marketable as, just the nuts and bolts of the business that I had known, but were really driven home there."

But she didn't land any acting jobs — and agreed to go to Nashville when her agent found her a role in Tennessee Rep's Cowgirls. The Rep offered her consistent work, including the role of a nurse in Margaret Edson's Wit, directed by Todd Olson. When Olson became artistic director of American Stage, he asked Rowe to come to St. Petersburg. She's glad that she did. The actress loves the area. But she admits to being a workaholic — as a teacher as well as actor — who hasn't found the time to investigate the Florida west coast very fully.

Still, area audiences have benefited amply from Julie Rowe's labors. And she's not about to rest on her laurels: "I want to be doing pieces that make me better, that challenge me and push me," she says. "… Because I don't want to be lazy, I want to be sure that I'm improving my skills."

And she knows for whom she's working: "To me it's about giving the audience a unique experience. And if my pretending to be someone else helps them in their life somehow, somewhere — a job well done. Try again tomorrow with a new batch of people."

She's a genuine artist who says she's grateful that she can do the work she loves.