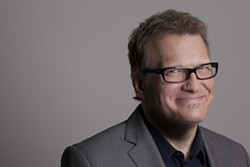 When: Fri., May 31, 7 p.m. and Sat., June 1, 7 & 9:30 p.m. 2013
Price: $30-$35
$30 to $35 bucks to see Drew Carey? We think that price is right. A comedy icon, loved for his stints on The Drew Carey Show and Whose Line Is It Anyway?, Carey has managed to fill the shoes of The Price Is Right’s longtime host Bob Barker. Just don’t go expecting him to be his usual TV self when he comes to The Comedy Zone to let loose with some stand-up. Carey, who authored Dirty Jokes and Beer: Stories of the Unrefined back in 2000, is no stranger to “big dick” jokes and similar vulgarity. Don’t let the screen sleekness fool you.
— Anita Overcash