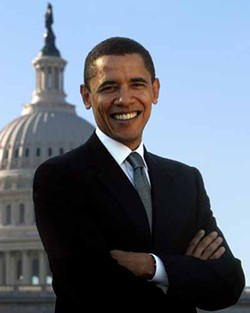 Barack Obama's historic win has people all over the country -- and all over town -- talking. To get a handle on the conversations swirling about regarding the big national and local races, Creative Loafing checked in with some of Charlotte's best and brightest movers, shakers and tastemakers. Here's what they had to say:

Chris Jenkins, editor/founder of CharlotteVibe.com: "I just pray that America isn't too wrapped up in watching what Barack does for change. Individuals must realize that they have a responsibility to carry out the change."

Jason Keath of DesignCharlotte.org: "I look forward to a new America -- one that works together to solve the many problems that we face, instead of against one another and against the world."

Martin Barry of the Charlotte Roller Girls: "I am glad the people of our country have chosen hope over fear. This is a HUGE and promising moment in American history."

Author AlTonya Washington: "Beautiful, just beautiful. I couldn't be more proud, more blessed. It's just fantastic, and I think I'm going to feel this way for the next four years."

Teresa Hernandez, owner of Pura Vida Worldly Art: "I am so excited. Obama was a person I was voting for and hoping would get elected. What I see is a lot of hope coming back to Americans in terms of the economy, and I think a lot of accountability and responsibility, which is really important. I think his message was that it wasn't just up to him to save the country, it was up to all of us. And I think that he makes everyone feel that we all have a hand to get things better, not just with jobs and education, but with families and working together."

Elizabeth Isenhour, marketing and public relations manager at the Mint Museum: "It was so exciting and emotional to see him get elected as president. This was the first time that my husband and I actually got involved with volunteering with any political campaign, and it was all the more inspiring when he got elected because we felt like we'd actually been a part of it."

Tom Hollis, chair of the Drama/Arts & Communication Division at Central Piedmont Community College: "I haven't stayed up late to watch an election in a decade. It was an exciting moment to witness and to see the enthusiasm. My daughter voted for the first time ever and she'd been eligible to vote before, but nothing had really sparked it for her. The students are really over the moon ... But, personally, I'm just thrilled at the outcome and to see this kind of thing."

Dwayne Collins, chairman of the Black Political Caucus: "Pleased for the most part [at] the results of the election on the local, state and federal level. Ninety percent of the candidates we endorsed won seats last night."

Brett Furniss of BDF Realty: "I wonder how long it is going to take Mayor McCrory to get the knife out of his back from Mecklenburg County voters. He knows Charlotte's issues, is a six-time mayor, has done (by all accounts) a tremendous job, and his opponent trashes Charlotte's neediness to the rest of the state -- yet Mecklenburg supports Bev Perdue? Congrats straight-ticket voters: Our roads should be here by 2025."

Mike Hendrix, musician and columnist for Cold Fury: "I for one welcome our new radical/communist/terrorist overlords. Obama still has not cured this morning's hangover for me -- and believe me, something must be done. Yet the federal government sits back and takes no action at all, heartlessly allowing the inhuman suffering to continue. This is not change I can believe in; this is not the America I thought I knew. I hereby declare his administration an utter failure."

Rob Tavaglione, owner, Catalyst Recording: "After eight years of abuse from 'President Cheney,' the good news had trouble sinking in with me at first. Now that it has, I'm filled with a renewed optimism, and my greatest hope is that affordable health care becomes available to all Americans, especially the many musicians who desperately need it."

Armen S. Boyajian, jazz violinist, pianist and leader, Air Apparent: "I'm proud to be an American and to have helped elect Barack Obama as president. I think he's thoughtful, reflective and, above all, a highly intelligent and analytical candidate. Let's hope that we can add fortitude to the list of adjectives, as he has a mighty tall order ahead of him as president, with the economy and the wars in Iraq and Afghanistan to contend with. But I think, above all, after a disastrous eight years under GW, it has to improve, and hopefully he will institute public works projects such as highway construction that will help the economy."