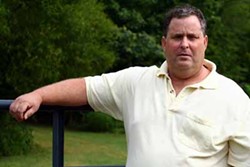 Jeffrey Medlin says he had no idea his case against an off-duty Mecklenburg County Sheriff's deputy would be tossed because of his attorney's inaction. Now, with little faith his case will ever be resolved, Medlin has filed a complaint against that lawyer.

Medlin's trouble started a pleasant day in September 2001. Tammy and Jeffrey Medlin were walking around their Mint Hill neighborhood for exercise. Tammy decided to go home; her husband continued his stroll.

Here's what Medlin said happened not long after: A man Medlin didn't know came up to him seemingly out of nowhere. With no explanation, the man attacked him. He handcuffed Medlin and continued attacking him. He had not, Medlin said recently, identified himself as a law enforcement officer.

In fact, that man, William Trull, worked as a sheriff's deputy for the Mecklenburg County Sheriff's Office, where he remains now, seven years later, as a sergeant. Trull, who has in court filings steadfastly denied Medlin's claims, was off-duty that day he arrested Medlin, who was charged with disorderly conduct and resisting a public officer. Medlin said Trull, who lived a few streets from the Medlins, eventually told him he believed Medlin had been yelling in front of his house; Medlin said he had not.

No charges were filed against Trull after the Sheriff's Office and Charlotte-Mecklenburg police investigated. The charges against Medlin were dropped February 2002 -- because they were merely trumped-up justification, Medlin believes -- but he was left with bills for injuries including a concussion, bruises, cuts, torn ligaments in his neck, broken teeth and broken bones in his mouth.

In 2002, Jeffrey Medlin filed suit, believing Trull or the county should've footed the bill. It's not likely that will happen. Nearly four-and-a-half years after the incident, a federal judge tossed the case, citing the failure of Medlin's attorney, Eric Levine, to move forward with the case.

"The Court finds that Plaintiff's absolute failure to take even the most basic steps to prosecute his action, including responding to Defendants' motion to dismiss, compels dismissal of his complaint," U.S. District Court Judge Robert J. Conrad Jr. wrote in an order issued Feb. 21, 2006.

The Medlins said they only found out about the dismissal in May after having made numerous attempts to contact Levine. They were astonished. "We'd like to know why we weren't notified," Tammy Medlin said. "It makes you speechless."

But Levine, who has until September to respond to Medlin's complaint, said the fault does not lie with him. He said he mailed numerous letters to the Medlins that went unanswered. "I didn't hear from them for months at a time," Levine said. "When the case got dismissed, I tried to appeal it. I paid the appeal fee myself and continued to write to them because I needed their help financially and otherwise. I didn't hear from them."

He said he's represented the Medlins on other matters without payment. Jeffrey Medlin in 1998 was convicted of domestic criminal trespassing, a misdemeanor, and given probation, according to state Department of Correction records. Tammy Medlin in 2006 was given probation and a suspended sentence stemming from a felony charge of attempting to obtain a controlled substance by fraud.

Tammy Medlin said those letters relating to the case were never received. His bills, she said, were. "We were never subpoenaed," Medlin said. "All the documentation and everything I had given to them, he never gave to them."

The Medlins have complained to a 26th Judicial District grievance committee about Levine, charging that after mid-2005 Levine repeatedly failed to respond to their queries. That grievance committee investigates complaints and makes recommendations to the State Bar, which can investigate further and make a recommendation to the State Bar's grievance committee, said Katherine Jean, counsel for the State Bar. The state committee can dismiss the grievance, dismiss with a letter of caution or a warning, or impose an admonition, a reprimand or a censure. Only reprimands and censures are made public. Stronger punishment -- such as disbarment -- can only come from the independent Disciplinary Hearing Commission.

Scott D. MacLatchie, who represented Trull, didn't remember much about the case. He said it wasn't common for cases to be dismissed for a plaintiff attorney's failure to prosecute.

The process for state bar sanctions drew attention when Mike Nifong was disbarred, but generally legal oversight receives less attention from media and the public than some other professional sanctioning, such as that of doctors. Seven Charlotte-area attorneys, including Levine, are listed among those recently disciplined by the Bar.

Levine has been reprimanded twice this year by the N.C. State Bar. The state oversight agency found Levine had signed an affidavit for a client who wasn't present (although he'd done so with the client's consent). The other reprimand came after Levine contacted opposing counsel's client after being instructed not to do so.

539 grievance files dismissed that did not contain allegations that, if true, would have been a rule violation

443 grievances dismissed after requiring a response from the respondent lawyer