Get Your Race On:

These fast cars are a ticket to anywhere 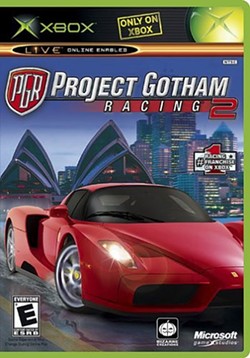 With NASCAR consuming so much news coverage, one might ask what the draw of fast cars is. After years of gaming, I know. I may not have to strap myself into a car and don a safety helmet, but with the graphics advances in racing games, it certainly feels as if I'm in the heat of a race when I'm zooming through the latest racing games from XBox. This is a far stretch from the original Gran Turismo, where the cars were boxy and made puttering/chirping noises as they moved around the flat track. As with all things videogame, racers have become smooth, slick and among the most realistic games you can play.

The blowout hit of 2003 returns with more features and a sweet live interactive option. My Enzo Ferrari does 120 in Barcelona, and that's just on the test run. Who hasn't at some point wanted a Ferrari? Now you can get one and take it on powerslides and 360s without worrying about the paint job. If you're not up for the Ferrari, there are 100 other cars to select from, including a Minicooper S that will drive you insane if you're playing on XBox Live, trying to catch up with a Lotus 340R being driven by some guy in Minnesota. But don't play to unlock stock cars, because there are none. This is a street-racing game, so Danica won't see her Indy racer featured in the mean streets of PGR 2's Stockholm.

The racing format is cool; it allows races to be won not only by speed but also by points accumulated through tricks (a common system for extreme sports games). But there are a few downfalls to each race. PGR 2's realism is shot, since none of these impede the car's progress: a smashed rearview, a busted trunk, bad weather.

However, not all is bad. There's a killer soundtrack of 200 original songs including big hitters like Uncle Kracker, Sir-Mix-A-Lot and Tyrese. What really caught me, though, was when I heard Bif Naked rocking out while I sped through Moscow. It made me want to slam my pedal to the metal. The game also includes a few cool indie bands along with the platinum-selling monsters that usually dominate videogames. And if you don't like Bif or the others, there's a custom soundtrack option that lets you burn your own playlist and use that instead. Eventually, I had my own sampling of Bif, Dar Williams and the Crystal Method running a loop as I ran through Kudos Tournaments.

If you're in the mood for out-and-out racing, Forza is the best choice. The 250 or so tracks are largely based on real racetracks, and only a few are set in cities like New York. The set-up is similar to that of an actual race, based entirely on speed and maneuvering; there are no pedestrians or non-race drivers getting in the way. The other drivers don't attempt to wreck you, and your race is generally you against the clock. While this ultra-real simulation may seem a bit boring, there's plenty of fun to be had.

Select the nationality of your manufacturer and start off as if you really are a national name in racing. All your cars come through your nationality unless you choose to buy at a higher price. I chose Japan and got great fuel economy.

Aside from the hundreds of cars to choose from, there is a tweaking option. Being someone who likes all the extras in a videogame, this was a blast. From gears to spoilers, I got to choose what went into my car. After each race, a trip to the garage brought more customizing and a faster acceleration. But tweak carefully: If you upgrade a strong class D car to a weak class C, you've got a problem.

The soundtrack is full of loud guitar rock, the best one being Black Sabbath's "Iron Man." The Amsterdam-based remixer Junkie XL (a.k.a., Tom Holkenborg) oversaw the soundtrack mix and skewed it towards loud rock. While I enjoyed it for the first hour of play, soon I was customizing again, using my own collection to provide the background. When you're playing a game for four to six hours, there has to be some change-up in the music.

Forza is a great racer for people who are really into the sport, but for a common gal like myself, I prefer the street racers that let me slam into a pole or get run down by a cop.