Great job!: How Adult Swim's Tim and Eric got so awesome 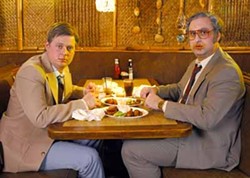 Tim Heidecker and Eric Wareheim are human beings. We can all agree on that. But does that disqualify them from being honorary cartoons?

True, they're not particularly exaggerated in appearance. Tim looks like the towheaded, pie-faced boy next door all grown up, while Eric's a bespectacled, sideburned galoot with plenty of height and a crooked smile. They were both born in Pennsylvania in 1976 and would draw little attention as white-collar employees alongside the water coolers of Middle America.

The late-night TV audience first glimpsed the duo's animated alter egos when they played the title characters in Tom Goes to the Mayor on Cartoon Network's Adult Swim programming block. Since 2007, they've appeared in the flesh as the stars of Adult Swim's Tim & Eric Awesome Show, Great Job! a surreal but emphatically not-animated sketch comedy series. Using green-screen technology to plop themselves into seemingly any environment, Tim and Eric play a host of weirdos, including tone-deaf singers whose faces drip with eczema, half-deranged corporate pitchmen, and would-be swingers obsessed with shrimp and white wine.

It may seem bananas that one of the definitive shows of Cartoon Network's most famous and influential programming blocks is, in fact, live action. Tim & Eric Awesome Show, Great Job! epitomizes Adult Swim's signature humor, which embraces uncomfortable situations, ironic repetition and out-of-nowhere randomness, often trusting the audience to fill in the punchlines. Not surprisingly, Tim and Eric's two series may be the network's most polarizing programs, likely to elicit either helpless laughter or sputtering rage, but never indifference.

On their day off from touring, Tim and Eric contemplated Rachael Ray -- "When did she get a chat show?" -- from a Buffalo, N.Y. hotel room, and revealed some of their secrets to doing such a great job.

Old Hollywood lore used to hold that Schwab's Drug Store at Sunset Boulevard was the place where aspiring stars like, allegedly, Lana Turner, were discovered. If Schwab's has a 21st century equivalent, it may be in cyberspace, at YouTube and other video-sharing sights. Tim and Eric's personal legend has it that an early version of Tom Goes to the Mayor was discovered on www.timanderic.com, but the truth is a little more prosaic.

Tim and Eric met as restless film students at Temple University, where they started making bizarre, irreverent shorts -- such as a celebration of lobsters' contributions to cinema -- in contrast to the stuffiness of their course work. (That comedy-as-dissent attitude still turns up in their shows' mockery of cultural touchstones like the Shrek films.) Tim and Eric launched a Web site in 2002 for their work, but Eric denies they had any grand plans for it. "Initially, the Web site was just a way to show videos to our friends or make each other laugh with video Christmas presents. It took off around the time our first TV show happened."

At that time, both Tim and Eric were college graduates separated by cities and day jobs. Eric was a photographer for Urban Outfitters in Philadelphia, while Tim worked for New York's Entertainment Software Ratings Board reviewing video games for content. Tim doesn't remember the job fondly. "I fucking hate [video] games. I didn't give a shit about the job and didn't spend one second of productive time on it." Instead, he looked up agencies and people in showbiz they admired, and sent out DVDs of some of their short films.

Then Tim received a completely unexpected call from Bob Odenkirk, co-creator/star of HBO's Mr. Show and one of the defining figures of sketch comedy in the late 1990s. "He was one of our biggest heroes," Eric recalls. "My first reaction was, 'No, that's got to be one of our friends.'"

Odenkirk enjoyed their stuff enough to offer himself as a mentor, and eventually executive producer. He helped Tim and Eric polish and pitch Tom Goes to the Mayor to Adult Swim, where it ran from 2004 to 2006. Even by Adult Swim's low-budget standards, Tom Goes to the Mayor relies on simplistic animation that resembles mimeographs of still photos. Tim starred as Tom, an average citizen who approaches the mayor (Eric) of small-town Jefferton with reasonable ideas that go horribly wrong, like a child safety campaign involving hundreds of hair-trigger bear traps.

To coincide with the creation of Tom Goes to the Mayor, Tim and Eric moved to Los Angeles, where they took inspiration from the city's most un-Hollywood locations. Simi Valley's endless strip malls and buffet restaurants shaped Jefferton's appearance as a town defined by suburban sprawl, with no cosmopolitan center.

The showbiz newcomers also found themselves working with some of their comedy idols. Eric recalls, "One of the first guys who did Tom Goes to the Mayor was Jack Black. We didn't even have a studio then, so we rigged my apartment as a little sound studio. We were about to start recording, but then heard a helicopter flying overhead. We found out that it was because Tom Cruise was running nearby with the Olympic torch. So we had to put Jack Black on hold for Tom Cruise. That's when we knew, 'We're in Hollywood now.'"