Have Your Vegan Cake and Read It, Too, at The Greener Apple

Ever have one of those Saturdays when you wake up with a whole list of to-dos in your head? Find new reading material. Pick up grocery basics. Buy laundry detergent. Get snacks for movie night. Find a small going-away gift for a coworker. Pick up a gift for the toddler nephew. And, oh, yeah, I'd also like to pet a kitten.

You can do all that and more at Book Buyers and its hidden inside store The Greener Apple.

Book Buyers is the family-run, used bookstore that Richard Rathers, his daughter Lee Rathers, and his partner Virginia O'Riley established in 1999. It quickly became a Plaza-Midwood landmark.

Book Buyers has all the things you expect of a used bookstore — plenty of paperbacks, romance, mysteries and thrillers — as well as a carefully curated selection of older books, out-of-print books and specialized books on almost any subject you can imagine. All very well organized, not just jumbled together. It's a book lover's paradise.

What you may not know and certainly wouldn't expect is that, within this bookstore is another store: the vegan- and eco-friendly Greener Apple, owned and operated by Lee Rathers, who, with her long curls and cat's-eye glasses, looks like the pretty school librarian all the middle school boys had a crush on.

I sat down with Rathers inside Book Buyers to chat with her about how her store-within-a-store came about. 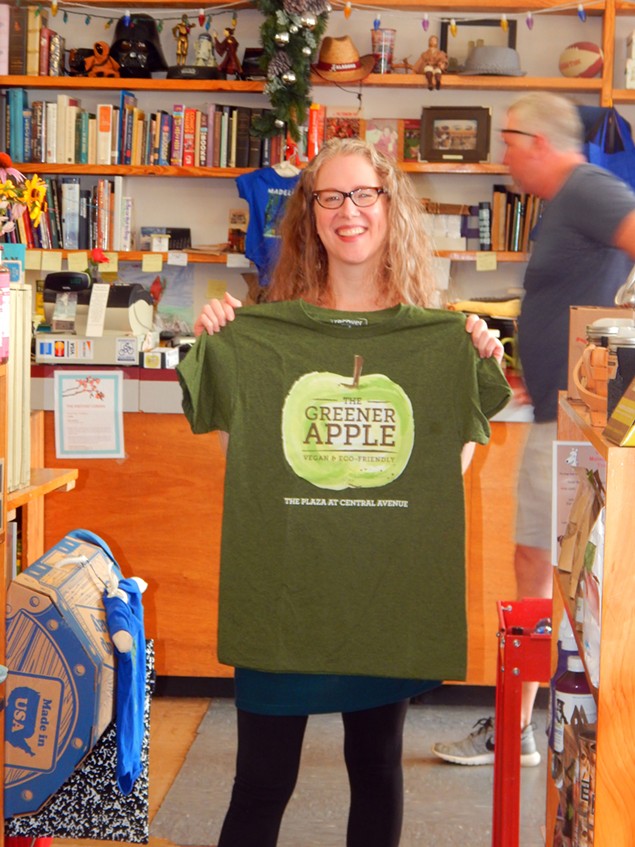 She told me she had planned to start a store with her friend Marley Claridge, the founder of Charlotte Vegfest. Plans fell through, however, and Claridge wound up opening Eco-licious (now closed), and Rather opened the Greener Apple inside Book Buyers in 2011.

"It was just a few shelves [at first], but now it's become a little general store," Rather says. "We keep growing, and we'll probably start encroaching on the books a little as more and more of the world switches to Kindle and e-readers."

Rather says the inspiration for the eco part of her store came from Book Buyers. "We are in the business of used books, which is very eco-conscious. We give books a new life. And almost everything in our shop is used. The furniture is pre-owned. Even the vacuum cleaner is pre-owned."

As are, maybe, some of the cats Book Buyers regularly fosters. This June morning, a snowy white Egyptian-looking cat with blue eyes is strolling casually about the store, while her three kittens — one tabby, one tortie, and one midnight — wrestle each other, chew on my faux-leather boot, and try to crawl into my mock-suede handbag.

As for the vegan part of the Greener Apple, Rather has been vegetarian since high school.

"I wish I'd become vegan sooner," she says. "I just always thought it would be so hard. There are so many barriers: I don't know what to eat. I can't give up cheese. But all you need to do — if you want to be vegan or just cut down on meat — is make some friends. I made one vegan friend, and I saw what she was cooking and eating, and it was awesome. And I began to think, yeah, I could do that. It turned out to be so much easier than I thought it would be. If I had known how easy it was to go vegan, I would have done it eons ago."

Rather loves to travel, so the inspiration for the Greener Apple came from similar stores in London, New York, Atlanta and especially one in Ohio called Park & Vine.

Sometimes people suggest that she should have started her store in Asheville (supposedly the N.C. vegan mecca) but she disagrees.

"To me, Asheville is a bit homogenized and very serene. But Charlotte is like this edgy melting pot," she says. "There's a lot of different cultures blending, a lot of cool stuff going on, a really energetic vibe. Charlotte is the place things will be happening."

The Greener Apple is not the only small vegan market in Charlotte that stocks an assortment of vegan basics such as Mori-Nu tofu, Just Mayo, nutritional yeast and alternative milks. There's also the Market inside Bean Vegan Cuisine, which focuses on corralling a huge selection of mainstream vegan products — Gardein, Daiya, etc. — into one space. But unlike that store-within-a-restaurant, the Greener Apple focuses on smaller companies and newer products.

"I want the really cool products that you read about in VegNews magazines, or receive in a Vegan Cuts box," Rather says. "The products people are buzzing about on the internet but are so hard to find." She's referring to items like Bee-Free Honey (a honey substitute made from organic apple juice, cane sugar and lemon juice), Superfood Parm (flavored parmesan "cheese" made from hemp) and Phoney Baloney Coconut Bacon.

Rather says that despite the Greener Apple being a finalist in the VegNews Veggie Awards multiple times, her company still doesn't register on the vegan marketing radar. "I don't have salespeople repping new products to me. So I have to stay on my game and do my research and make a lot of phone calls. But most of these companies are extremely wonderful to work with."

It's not only vegans who like the Greener Apple. Lee notes that many of her return customers are concerned about allergies. By definition, vegan means no eggs and no dairy — two of the most common allergens. And Lee points out that many of the products are gluten-free as well.

Customers with egg allergies come in to buy one of her several brands of egg replacers. Parents of children with dairy allergies shop for Choco No-Nos (a dairy-free, M&Ms knockoff) or dairy-free peanut butter cups. And those with chemical sensitivities appreciate the selection of natural, organic cleaners, laundry detergents and personal, feminine, and baby care.

Rather, a former makeup artist for the Body Shop who loves doing makeovers, has recently begun adding more natural cosmetics, including Eco Bella. As we walk down the aisles, she pulls a box of Raw Finishing Powder from Gourmet Body Treats from the shelf and begins reading the ingredients: "Arrowroot, green tea, rose, plaintains, sugar beets, hibiscus, coconut. Every ingredient is something you can recognize and pronounce. Sometimes I joke, if I ever get locked into my bathroom and can't get out, I could survive a few days simply by eating product."

Continuing through aisles, there are more environmentally friendly products, including an assortment of glass and stainless steel water bottles (including Klean Kanteen insulated Growlers, which will keep drinks cold for 40 hours and iced for 120 hours). There's also reusable glass and stainless steel straws, beer and kombucha kits, and candles with beautiful fragrances made from natural oils instead of chemicals (there's the co-worker gift).

A top seller is the organic bamboo "spork" — a spoon on one side and a fork on the other. Small enough to fit into a jeans pocket, it's the perfect accessory for summer beer and food festivals — you eliminate plastic waste and never need to worry about the food vendor forgetting to include utensils.

As for that gift for the nephew: If he's not into books, then perhaps other eco-friendly toys such as foreign language blocks (handcrafted from sustainable wood) will do.

Rather says her store allows her to stay connected to the vegan community. "I used to go to veg meetups," she says. "I don't know, maybe I'm getting older, but they get quite loud and it seems I spend my time shouting, 'What?! What did you say?' instead of having a conversation." Her shop gives her a chance to converse with local vegans in the quieter atmosphere of the bookstore.

It also gives her a chance to gently spread her message to regular bookstore customers, who often stop to pick up a cookie, a lip balm, or some breath mints. "So many people don't really understand what vegan means," she says. "They tell me they've never eaten vegan food. What? You've never eaten an apple?"

Similarly, many people think eco-conscious means expensive. "People don't realize that many products actually wind up saving you money," she says. For example, the Greener Apple sells super-absorbent cloths that can replace dozens of rolls of paper towels.

After Rather gives me the store tour, we talk a bit about what we ate before we went veg/vegan. I volunteer that I ate a lot of grilled chicken breasts, plus simply cooked veggies. Supposedly healthy but a bit boring. Now I'm eating Indian, Thai, Vietnamese, sushi while using spices I never dreamed of.

She agrees wholeheartedly. "The world of flavors awaits you [as a vegan]," she says. "Flavors are out there. Go find them." Perhaps your first stop will be the Greener Apple.