The condiment that thought it could 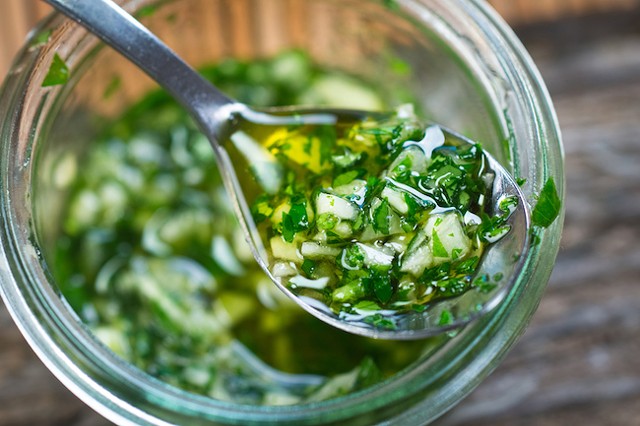 On the phone with a farmer friend the other day, I asked what he was making for dinner. It's a question I often pose to farmer friends when I want to be inspired, because these folks are often the supreme authority on how best to use their product. Each meal is an opportunity to celebrate the harvest, as well as get rid of surplus produce.

That evening's meal would employ cucumbers, parsley, tomatoes, kale, garlic and peppers, rounded out by some animal products for which veggies were bartered with livestock farmers.

The menu would include massaged kale salad, bacon, cucumber feta salad and roasted potatoes with chimichurri. It was a meal that fed 10 family and crew members, and cost little more than the the price of oil, vinegar and salt.

He was particularly eager to gush about a trick he'd learned from a fellow farmer: soak the potatoes before roasting them. But I was more interested in the chimichurri part.

This Argentine condiment/marinade is based on parsley, olive oil, garlic, salt, vinegar and other herbs like oregano. These rather pedestrian ingredients team up to cover all of the flavor bases (except sweetness): salt, bitter, sour, umami, fat and heat. If you're looking for something easy or smooth, look elsewhere. Chimichurri is for those who like it a tad rough and challenging, and don't mind an occasional burst of adrenaline at the table.

Like some other notable condiments, chimichurri comes in shades of both red and green. Red — or rojo chimichurri — contains ripe tomatoes and peppers, while green — or verde — does not. My farmer friend made a green, with added cilantro, and said it turned out fantastic. I, however, was intrigued by the idea of red on potatoes. The tomatoes are an approximation of ketchup, while chile pepper of any color is always welcome. And with tomato season upon us, all the more reason to savor the red side of chimichurri while it's at its best.

The debate between red and green recalls that between other great condiments, like the New Mexican red versus green chile debate.

But the obvious historical parallel to chimichurri are the Italian red and white clam sauces, so beloved by pasta enthusiasts. Both are parsley-based, with nearly identical ingredient lists. This is no coincidence, because the Italian population in Argentina is large and its influence strong — the name chimichurri is based on the Basque words for "a mixture of several things in no particular order."

Argentine chimichurri, thus, is a New World evolution of a Mediterranean invention. Today, an Italian verde may have capers, anchovies or clams. When served hot, as with pasta, it will have butter instead of — or in addition to — olive oil.

When you have chimichurri, you find yourself looking for things to put it on, or in. Marinate meat in it, stir it into beaten eggs before scrambling, toss it into salad.

Better yet, put it on the following recipe. 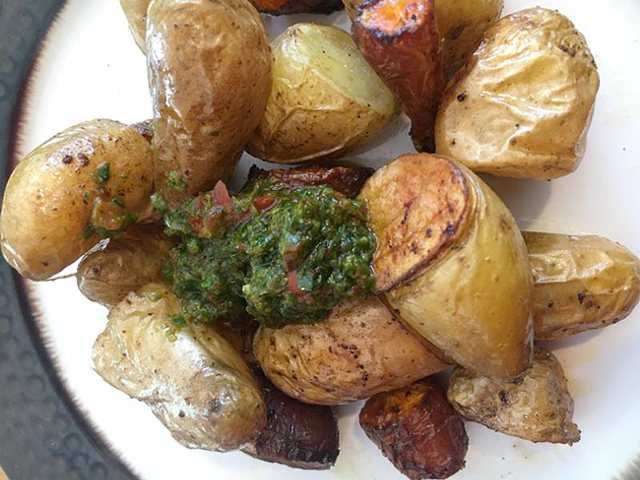 Cut potatoes to inch-chunks or thereabouts, and soak in cold water for an hour. For a recent batch, I soaked thickly-sliced purple carrots as well, which are more earthy and bitter than sweet carrots and great for cooking.

While the roots soak, hurry hurry. Make some chimichurri. Here is a recipe from my Argentine friend, Diego Grant, owner of Gauchito Catering in Albuquerque and the city's best Argentine grill food truck. He brought this chimichurri to my birthday party eight years ago and my wife still hasn't gotten over it.

"After that, let rest all together for 15 minutes. When you have the flavors out, add..."

You have now made chimichurri verde. Set roughly half aside, add chopped tomato to the remaining verde. Diego doesn't do this, but I do, and I'm hardly alone.

Meanwhile, many have observed that combining mayonnaise with chimichurri further improves the potatoes, and I would never try to block that kind of a good time.

Indeed, I applaud it. What's not to love about two of the greatest condiments in the world combining to make something greater than the sum of their parts? I'm on Team Chimichurraise.

When the roots are done soaking, set the oven to 415. Drain the potatoes, add them to a baking pan, and toss with olive oil, salt, garlic powder and a little black pepper. It doesn't matter that the potatoes are wet at first; they will dry off.

The next day, your chimichurri will be even better with age, and the world will be yours to explore through the lens of chimichurri. You will enjoy a lot of flavors. You will eat a lot of parsley.