I Am Woo Girl, 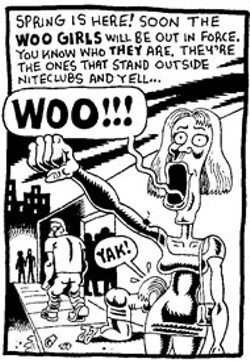 Woo Girls get a bad rap. You've read about them in Scene & Herd, spotted them in The City cartoons, or maybe you've experienced their zest for life first-hand. This subculture of women is said to migrate in packs from bar to bar on a mission to let the world know that you can take the girl out of the sorority, but you can't take the sorority out of the girl. People cross the street when they see these girls stumbling down the sidewalk toward them and never take the time to get to know the woman behind the "Woo!"

I was in a sorority and I admit that I, too, am prone to the occasional "Woo!" when I'm out drinking with the ladies. I'm well aware that I'm no longer in college, but that doesn't mean I'm ready to hang up my shot glass to become one of those intellectual coffee drinkers who hates the rest of the world almost as much as they hate themselves. I still like to get drunk on purpose for no reason whatsoever. And when I do, you may hear a "Woo!" I'm not depressed, nor do I have any underlying insecurities that I'm trying to drown out. Sometimes, it's fun to get wasted. This doesn't make me stupid, shallow, boy-crazy or "blonde." I'm just lettin' loose and havin' a good time.

Of course there's more to a Woo Girl's vocabulary than that 3-letter expletive. Many of us went to prominent universities and have gone on to have successful careers. You may even work alongside a Woo Girl and not even know it. I'm not going to jump up and down and shout "Woo!" in my co-worker's ear while waiting to use the fax machine. But put me in a cheesy club with Outkast's "Hey Ya!" blasting out the speakers and that's another story. Even Woo Girls know that there's a time and a place to "Woo!"

Here are some "Woo!" worthy moments:

1. After you've taken a shot: Specifically a Jaeger bomb, Irish car bomb or any other "chugging shot." If you can finish one of these without puking, you deserve some self-recognition.

2. You run into a friend at a bar: It doesn't matter if you saw her every day for the past week or if you haven't seen her in years. It's still a big freakin' deal. Innocent bystanders, beware of getting in the way of this joyous reunion or you could end up with a puncture wound from a pink stiletto heel.

3. The DJ plays your favorite song: Or your second favorite song. Or pretty much any song that you know all of the words to. It's like kismet that he played the exact song you wanted to hear right when you wanted to hear it. You now have to drag your girlfriends onto the dance floor with you to celebrate this cosmic event (this usually involves a group "Woo!"). If there's not a dance floor, just dance in the middle of the bar. People won't mind making room for your posse. If they do mind, it's OK -- you're too drunk to notice.

4. Someone shares a juicy piece of gossip: Sara Kate is engaged. Ann Marie is pregnant (on purpose). Mary Elizabeth got dumped (we "Woo!" because she's a bitch and deserved it). All of this good news requires a shot, which leads to another "Woo!" (see number one).

5. Using the "Woo!" to woo: Nothing attracts a fratastic Patagonia-sporting guy like a girl who's even more loud and obnoxious than he is. Once the sweet sound of the woo girl mating call pierces his ears, he's sure to sidle up next to you and offer to buy you a Bud Light, or a Michelob Ultra if you're counting carbs.

6. Just for the hell of it: Every girl must make this decision on her own. The bar might be too quiet and you're too drunk and bored to be in such a civilized establishment -- why not stir things up? It's a total judgment (or lack of judgment) call.

Woo-ing is as innate for some girls as accessorizing is for others. And -- wouldn't you know it? -- some of us are blessed with both traits. For instance, nothing goes better with a "Woo!" than hoop earrings and a David Yurman bracelet. But now we're getting into woo girl gear -- and that's a whole other column.

Citizen Servatius will return next week.