Is the arsenic in treated wood dangerous? | Straight Dope | Creative Loafing Charlotte
Switch to the mobile version of this page.

Is the arsenic in treated wood dangerous? 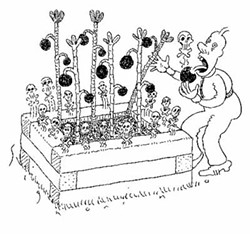 I've noticed a lot of my neighbors have built elevated gardening beds in their yards using wood that's marked as treated with arsenic. Will the arsenic get into the vegetables and fruits these people are growing? If so, is that a health concern? -- Ray Charlton, Corvallis, Oregon

Hard to say. Were these vegetables and fruits they were actually planning to eat?

Manufacturers treat wood with arsenic for the same reason you don't want it in food-- it kills things, in this case the bacteria, fungi, and insects that would otherwise nibble on the wood. Although several wood treatments contain arsenic, the compound of greatest concern is chromated copper arsenate (CCA), a trifecta of dangerous chemicals that at one time (like 1990) was used on almost all the pressure-treated lumber in the United States. Although CCA is supposed to stay put, small amounts can leach out when the wood is exposed to the elements. CCA-treated garden borders aren't the only thing leaking arsenic into the environment; the same can happen with treated-wood mulch or chips, decking, and traffic sound barriers.

Of the chemicals in CCA, arsenic is the most dangerous due to its toxicity and ease of uptake by plants (although hexavalent chromium, which you may remember from the film Erin Brockovich, can be pretty bad). To find out how much arsenic could end up in your salad bowl via CCA-laden garden borders, University of Minnesota researchers tested carrots, spinach, bush beans, and buckwheat grown in raised beds built with CCA-treated wood. All the beds were at least ten years old. Soil and plant samples were taken at varying distances from the wood border. In all cases arsenic levels were highest near the wood and dropped off quickly toward the center of the beds. Example: carrots grown next to treated wood contained 4 to 11 times the arsenic found in those grown four feet away. Complicating matters was the huge variation in the treated wood's arsenic content -- a ratio of more than 60 to 1 between the worst and best cases.

So what's the risk? In their worst-case scenario, the Minnesota researchers found that a 132-pound person who ate seven ounces of spinach would narrowly exceed the daily arsenic limit established by the U.S. Environmental Protection Agency. Separate tests by the Connecticut Agricultural Station reached a similar conclusion: if you ate more than 11 ounces of fresh lettuce grown next to CCA-containing boards you could exceed the limit. The actual amount of arsenic in play here is minute -- just 92 micrograms in the Minnesota example -- and let's face it, even for greens lovers, a half to three-quarters of a pound is some serious spinach. Still, the danger was enough that CCA has been banned for most residential uses in the U.S. and Europe since 2004.

What do you do about CCA-treated wood in garden beds now? At minimum you want to plant fruits and vegetables a foot or two away from the border. (The Minnesota researchers recommend 15 inches.) If whatever you're growing has voluminous roots or you're just the cautious sort, you can line the bed with plastic. Eventually, of course, you'll want to replace the wood with something less problematic.

Be warned, though: one thing you don't want to do is try to get rid of CCA-treated wood by burning it or sawing it up. Although reports of environmental arsenic poisoning are rare, those we do see often involve dust, ash, or the like from sawn or incinerated CCA-treated wood. One case involved a rural Wisconsin family that suffered a scary list of ailments including epileptic seizures, seasonal baldness, rashes, diarrhea, headaches, bronchitis, and blackouts. They were lucky nobody died -- the arsenic level in some of their hair samples was found to be more than 100 times normal. Turned out they'd been burning CCA-treated lumber scraps in their wood stove for three years.

Suppose a prison has a dairy, and as depicted in the Kurt Vonnegut novel Breakfast of Champions, the prisoners have sex with the cows and the milk from the cows is sold to the public. If a prisoner has an STD such as HIV, and has sex with a cow in the prison dairy, what chance is there that someone drinking that cow's milk will catch that STD? -- Zack Smith

I was killing 99.99 percent of the germs on my hands using Purell hand sanitizer when I noticed the strong alcohol smell, which of course led me to think: Can mixed drinks be made with Purell instead of vodka, gin, etc? Can I make a Purellini, a Purell sunrise, a Pure drop, or a screaming Purell orgasm? -- Mike Saltman

Can a woman come down with a common cold by being exposed to it through the virus-laden hands of a suitor through vaginal mucosa only? -- Name withheld by request

Comments, questions? Take it up with Cecil on the Straight Dope Message Board, straightdope.com, or write him at the Chicago Reader, 11 E. Illinois, Chicago 60611.