In the fourth floor of a high-rise apartment building in Uptown Charlotte, the concierge is plotting a revolution fueled by art, theater, rock 'n' roll and God only knows what else.

James Lee Walker II doesn't just work at the Vue; he also lives here. One of the Queen City's more wildly creative minds, Walker, 38, is an actor and singer who blends both forms into a character that fronts a popular local Charlotte band, Crackers and Snackmeat.

When he's not acting like a concierge at the Vue, Walker is wailing out Who or Billy Idol covers, or doing improv comedy, or winning local theater awards for his parts in plays like The Day They Shot John Lennon. 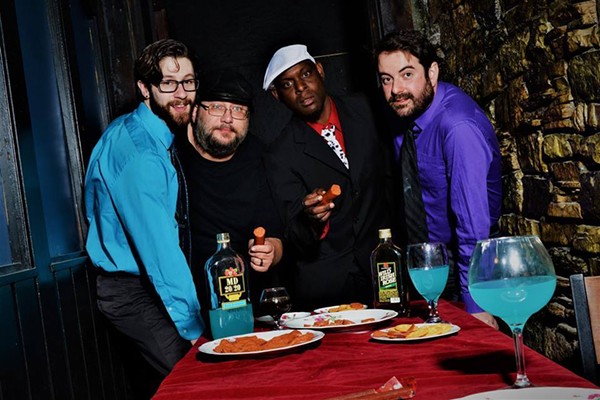 His band Crackers and Snackmeat has been performing around town together for the past decade, stretching musical boundaries with its pounding funk grooves, laid-back blues and hard-hitting, hard-rock hooks.

Fearless in exploring different genres, from jazz to rock to metal, the band will celebrate its 10th anniversary on Saturday, March 10, with a party at the Rabbit Hole in Plaza Midwood. The peformance will serve as a greatest-hits retrospective of sorts, with folk-punk singer Felly and the experimental metal group Venus Invictus sharing the bill.

In any given Crackers and Snackmeat set, the group's influences simmer in a sonic stew of original songs with well-picked covers slipping in and around each other like samples in a tasty hip-hop mix. At the center of the madness is Snackmeat, a chaotic soul singer from outer space, wearing steampunk goggles or whatever else he chooses, navigating the Crackers' musical universe like Buckaroo Banzai in the fourth dimension. 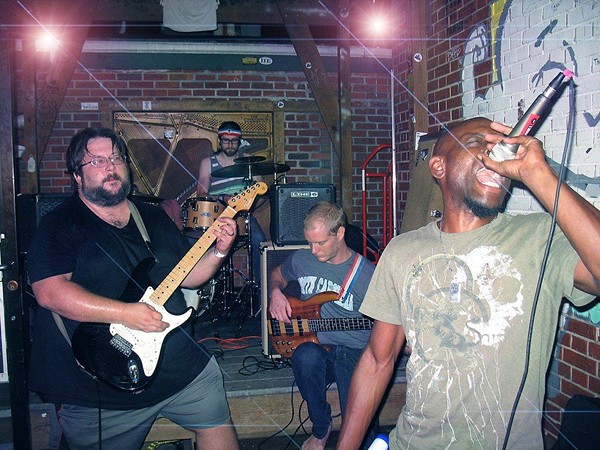 Snackmeat is, of course, Walker, who was born in a military family in Okinawa, Japan, in 1980. He's the son of a Vietnam vet; his mother Leslie was an Army nurse, and his sisters, Olena and Aldrezia, are also military vets who saw action in the Middle East. "Everyone was a veteran except me," Walker says with a chuckle.

The family is an amalgam of Southern Baptist spirituality, military pragmatism and progressive politics, best exemplified by the fact that they voted for Barack Obama as proudly as they support the NRA.

But James is by far the weirdest of the Walker clan. Spending his earliest years on the Japanese archipelago gave him an appreciation for Japanese culture that flowered into full-blown otaku. His mind moves like a Shinkansen bullet train from one subject to another, as he darts from a discussion of classic anime such as Go Nagai's 1970s Devilman series to modern Japanese TV shows like Gurren Lagann, before slipping easily into a dissertation on Howard Zinn's one-man 1999 play Marx in Soho.

In the early '80s, the Walkers moved to Beaufort, South Carolina, where at age 8 James had what he called his "Bernie Sanders moment" — watching a man who looked like himself, Jesse Jackson, run for president. It woke something up in Walker. "Most kids growing up have a favorite sport," Walker says. "Mine became politics."

Walker was simultaneously inspired by another dynamic black performer: MJ. "I was trying to watch Kung Fu Theater one day and my sisters were watching music videos, and I thought music videos were stupid and pointless," he remembers. "Then Michael Jackson's 'Thriller' came on and I was like, 'What the hell is this?' They were just in a movie theater, and now — oh crap! — there's a zombie? What?"

Walker was floored. "I asked my dad who was that and he said, 'That's Michael Jackson.'

From there on out, when Walker's teachers would ask him and his classmates what they wanted to be when they grew up, Walker would say, "I want to be multimedia superstar."

Like many artists with far-flung, often contradictory passions, Walker found a home in rock 'n' roll. He fell in with some punk rockers in Beaufort who lived together in communal houses, and eventually moved in with them. He joined various punk bands, including one called the Hitchcock Blondes. As with most punk scenes of the late 20th century, political activism was never far away.

"I had a friend named Roger who would read from The Communist Manifesto," Walker remembers. "He would drift off to sleep saying things like, 'You, James, will be my general.'"

When the time came for Walker to start seriously pursuing his theatrical ambitions, he thought about moving to Atlanta or Nashville, but settled on Charlotte, whose creative scenes were growing fast. "I liked the blank-slate quality of [Charlotte]," Walker says. "You could literally do anything."

It didn't take him long to find some allies. Keli Semelsberger, director of the Charlotte Comedy Theater, immediately recognized Walker's brilliance. "I remember saying to James once, 'You're so smart that you're damn close to being insane,'" she recalls.

Within a few years, Walker's acting spilled over into activism. After watching the Occupy Wall Street movement take form on TV in 2011, he heard that a similar movement was happening in Charlotte. So on the night of October 14, 2011, he showed up at the Occupy encampment in front of Charlotte's old city hall, tent in hand and wearing a suit. As luck would have it, this was the same night as that year's Metrolina Theatre Awards, and Walker had been nominated for his performance in The Day They Shot John Lennon and as part of the cast of Rent.

"I walked up to city hall and asked the [Occupiers] if it was cool to set up my tent," Walker remembers with a laugh. "Then I said, 'Well cool, I'll be back in a little while. I need to go see if I've won something.'"

For the next four months, Walker lived in his tent, occupying the former city hall and establishing himself as a liaison between the Occupiers, the Charlotte Mecklenburg Police Department and the media. He earned the nicknames "Black Moses" and "The Human Megaphone," a play on the movement's term, "human microphone," for people who delivered speeches at Occupy sites. 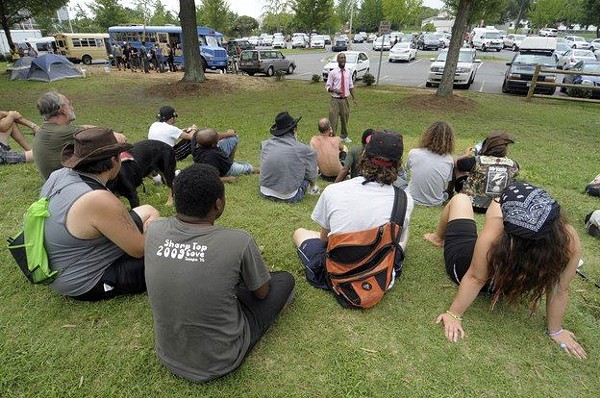 But speaking to authorities was hard for Walker. "I get frustrated with speeches," he says. "We'd have Mondays where we'd have to go speak to the City Council, and I'd throw my suit on, and we'd be in front of the City Council with my written statement, and halfway through it, I'm off the page." He laughs. "The others would be like, 'You're doing poetry slam again, James.' I would get pissed off."

City officials worked hard to figure out ways to catch the Occupiers breaking a law, and once it was able to evict the group, Walker exchanged contact info with many of his fellow Occupiers, with whom he remains friends. It's the day-to-day activities during the occupation that Walker remembers most fondly.

"I would take a coffee pot all the way to the bus station," he remembers, "make coffee, and then walk with a full pot of coffee back to 'Excalibur,'" — the Occupy Charlotte command center.

He shakes his head and smiles wistfully. "Ah, those were the days," he says, grinning.

In the seven years since Occupy broke down its campsites around the country, Walker has remained passionate about activism and moving Charlotte's agenda toward more socialist ideals. He also incorporates it into his art.

"I'm obsessed with the concept of the commune," he says. "Anyone can sneer at socialism all they want, but it's just taking care of each other. Fuck Ayn Rand." He shakes his head, referring to the ice queen of the Libertarian movement. "That self-serving nonsense is just detrimental to a society. Period."

Walker would like to see his ideals manifested as art centers where kids can realize their own creative visions. "A place where, instead of being bored or doing heroin, a kid can go and watch someone in the corner of the building work on choreographing a dance routine with three other buddies, while another kid, who would otherwise be doing something worse, is in another corner painting or drawing a picture of that."

When asked what he thinks of activist communities that have sprung up in Charlotte since the Occupy movement, Walker pauses, uncharacteristally silent for a moment. "It's not loud enough," he says, finally, "All thanks and respect to Charlotte Uprising and Black Lives Matter, but it's just not loud enough."

If loud is what he craves, Walker gets his fix fronting Crackers and Snackmeat. Phil Black, the musical director, says the group came together by chance to serve as the backing band for actors Rodney Keith and Nikki Frank's improv sketch project Habitual Ritual. But the creative chemistry between Black and Walker was immediate.

"We set out to bastardize every musical genre," Black, 44, says. 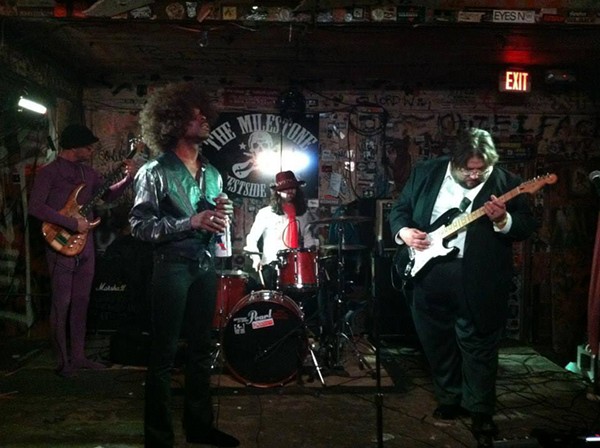 In the band, Snackmeat is the mad master of ceremonies, a character that lets Walker get loose and not have a care in the world. "I'm an arts person and performer — period. My ego is larger than any planet in the solar system," Walker says. But he's also a singer, he adds, who "was trained by people that actually care about singing. If it wasn't for this band, I'd be singing raffish R&B and putting absolutely no effort into it." He laughs. "So thanks to these guys, I'm incredible."

Walker's favorite thing in the world is watching and singing to musicals, he says, citing The Rocky Horror Picture Show and Lyle, Lyle Crocodile. "The fact that people in this country don't just randomly break into song at any given moment is seriously stifling our development."

Ultimately, Walker does what he does because it's fun — and because he likes to take care of people. "It takes a community, that's all," he says. "Any issue we have — nationally or whatever — needs to be dealt with city by city, county by county. That's how you fix anything. If the states want to govern themselves, well cool, but within those states, you need mad socialism. That's the only way it's gonna work."

He breaks into characters again: "'I grow tomatoes.' 'Cool. I bake bread.' 'Awesome.' It's as simple as that. And anyone making it more complicated is just someone who's trying to get something over on you."

His friend Semelsberger couldn't agree more. "Brilliant people like James are always in danger of falling through the cracks," she says, "having to take jobs that they're way too smart for, unless someone just says, 'Hey, you're going to MIT and I'm going to pay for it,' you know? But we're a tribe, and James is definitely one of our own."

Watch Crackers and Snackmeat take on the Who: