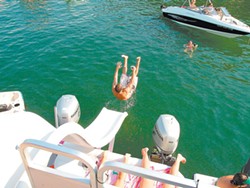 Persistent rainfall kept many of the 32,000 boat owners around Lake Norman off the water more than usual this summer, but, somehow, fatalities on the lake — most of them due to drowning — jumped from one death in 2012 to four this season.

On June 17, a man without a life jacket drowned when the boat he was aboard started sinking. Three days later, a 9-year-old died from trauma after a jet-skiing collision. A third victim died on Aug. 31 while partying with friends and officials are still waiting on an autopsy report after someone fell off a charter boat a day later and allegedly drowned. Lake Norman isn't alone: a 19-year-old Charlottean drowned in Badin Lake in early September and a teacher from Fort Mill died in August after falling off a dock in Lake Wylie.

From 2009 to 2011, there were no deaths and few serious accidents on Lake Norman, an "inland sea" that spreads into four counties, including Mecklenburg, Iredell, Lincoln and Catawba. So what accounts for the sudden increase in tragedies? There doesn't seem to be a simple answer.

Officials say most deaths on local lakes stemmed from alcohol, boat-operator inattention and a lack of life jackets. In several instances, people — like the 19-year-old Charlottean — struggled while swimming or simply didn't know how.

Tragedies dot the histories of these lakes. A man drowned in Badin Lake last December after his boat capsized, an 8-year-old died in a freak propeller accident on Lake Wylie three years ago, and, unable to staff the swimming area with lifeguards, Lake Norman closed a portion of public access swimming area after a series of tragic drownings one summer in the early 1980s, Lake Norman Marine Commission executive director Ron Shoultz says.

Local officials feel the burden of lake deaths and spend a significant amount of their time trying to prevent them. Volunteers at the commission, representatives from law enforcement agencies from the four counties bordering the lake, and the N.C. Wildlife Resources Commission use a three-pronged approach: legislation, education and enforcement.

Several recent statewide laws tightened rules for boaters, including one three years ago requiring anyone under 26 to complete a boater-safety certificate, Shoultz says. While the laws help, he says they also ban local jurisdictions from passing stricter regulations.

"We're a little bit handcuffed in terms of providing additional [laws]," he says, adding that instead they promote "best practices" safety guidelines that about nine local charter boat companies voluntarily follow. While the commission still wants the laws revised so they can require additional boater education rules, the state legislature hasn't made it a priority.

"This year the agenda for the General Assembly was action-packed, to say the least, on a number of other issues," Shoultz says.

Another recent state law requires anyone on a boat who is under 13 to wear a life jacket, but one local official who asked to remain anonymous says he wishes state law would require everyone on a boat to wear one. Life jackets aren't necessarily popular but the vests could have prevented a significant number of recent drownings.

Mecklenburg County is working to create public-access swimming on Lake Norman, which will look similar to a beach and will be staffed with lifeguards. But Mecklenburg Parks and Rec director Jim Garges says the new beach won't be foolproof.

"The beach won't help people that are stupid," Garges says. "All we can do is provide a safe place, as safe as it can be."

Bill Russell, president of the Lake Norman Chamber of Commerce, says regardless of the success of various initiatives, it's impossible to prevent everyone from making bad decisions.

"I mean, come on, we were all kids," Russell says. "If someone says you can't do it, some people will find a way."

Sgt. Jeremy Harrill, an officer in the Wildlife Commission's division of law enforcement on Lake Norman, says his agency only tallies accidents that amount to more than $2,000 in damages or bodily injury warranting medical attention. The number of accidents this year aren't available yet, but he says the elevated 2012 accident ranking actually came during a four-year low in annual accidents, though it was the only year with a fatality in that time frame.

N.C. Wildlife officers at Wylie, Badin and Norman agree that the leading cause of serious accidents isn't willful disregard of the rules, but boat-operator inattention.

"There are some things you just can't enforce your way out of," Harrill admits, but says courtesy boat checks at lakes across the state are a major way his agency reduces safety risks without issuing tickets, so long as any violations are corrected before the boat hits the water. N.C. Wildlife checked 539 people on Lake Norman in the last two summers, he says, and about 13 percent didn't have proper safety equipment like life jackets or a fire extinguisher.

The agency offers outreach programming too, including a boating class aimed at middle school students in Stanly County. Still, some officials are frustrated that prevention efforts aren't bringing fatalities down.

Harrill says 20 to 30 percent of fatal accidents statewide are alcohol-related, but Sgt. Mark Faulkenberry, in Mecklenburg's division of lake enforcement, says alcohol is usually the biggest factor in local accidents. While the number of impaired operator citations — the boating equivalent of a DUI — issued on Lake Norman by his office had been going down, he says citations jumped from five to 10 between 2012 and this year.

N.C. Wildlife officers say their agency's campaign against "boating under the influence" over the last three years has helped significantly decrease the number of alcohol-related citations to boat operators statewide even though enforcement increased.

The "On the Road, On the Water" initiative involves simultaneous road and lake checkpoints with a mobile DUI-testing unit nicknamed the "Batmobile." N.C. Wildlife Sgt. Barry Rowell, who oversees the Mecklenburg County portion of Lake Wylie, says, "Our agency has been putting a lot more emphasis on boating while impaired, and I think it's made a difference."

Lt. Todd Carver, Iredell County's supervisor for Lake Norman patrol, agrees that alcohol is the top problem, followed by a lack of life jackets. In some cases, like the intoxicated swimmer who drowned in late August, it's a combination of both.

While it isn't the law, Carver encourages everyone on the water to wear life jackets. Like other officers, he says people could protect themselves by checking safety equipment, having an educated and "designated" driver and always knowing where they are so that a call for help can be answered more rapidly.