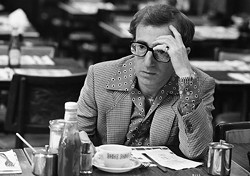 Made in 1984: Hollywood Movies from 30 Years Ago CL Recommends

When: Sat., June 21, 2 p.m. 2014
Price: Free admission
The summer film series Made in 1984: Hollywood Movies from 30 Years Ago continues with a screening of the delightful Broadway Danny Rose, which earned Woody Allen a pair of Oscar nominations for Best Director and Best Original Screenplay. He also plays the title character, a talent agent who’s too sweet for his own good. Representing a has-been singer named Lou Canova (Nick Apollo Forte), Danny finds himself getting mixed up with Lou’s tough-talking mistress Tina Vitale (a knockout performance by Mia Farrow). (Matt Brunson)