The second edition of the EDM event Pop Wow returns this week. Has red become the new black? 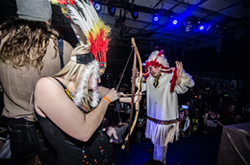 Imagine hitting up one of your favorite Charlotte nightspots. The cover at the door and the backdrop of mbira, a traditional African thumb piano, suggests they've got something different going on, but you're game. After a few drinks, the lights dim and performers take the stage. You squint your eyes. The female dancers — all Caucasian women — are in blackface. A flyer on a nearby cocktail table reveals that tonight's event is called "Slave Song" and listed amongst the entertainment are "sexy Negroes." You realize the scene on stage is supposed to be a traditional African ceremony. As the music ramps up, the air so full of energy, a woman actually pulls out a whip and uses it on a guy, who's also in blackface. Both are dressed in faux African clothing. The crowd loves it.

Last year, partiers enjoyed an event not too far from the fictitious "Slave Song." Scantily clad females dressed in American Indian regalia danced to electronic music at an event called "Pow Wow." The promoter of the party, in full regalia as well, had a bow and arrow aimed at him by a woman wearing a feather headdress.

Remember Miley Cyrus pulling her eyelids back and mocking Asian people? Or Julianne Hough, of ABC's Dancing with the Stars, in blackface last Halloween? People were outraged. But if you slap on some fake deer skin and a headdress and dance around like an "Indian" on stage at a party, no one says a word. The story of Pow Wow 2, the second iteration of a Native American-themed EDM party happening at Chop Shop on May 23, is actually a story about our complicated relationship with race and how utterly inept we are at talking to one another about it.

"I didn't realize it was — " Pow Wow promoter Mikey Tookie pauses, sounding as if he is choked up, "... anything. I'm not trying to sound ignorant. After the first one, people said [Pow Wow 1] was one of the best parties they'd ever been to. That was from the inside looking out, but I guess from the outside looking in, people were offended."

With all the talk about the NBA Clipper's owner Donald Sterling being a racist asshole and telling his girlfriend not to bring minorities to his games, it's dug up a deeper conversation about race that America is not yet willing to face. It's the issue of pervasive racism against American Indians that is so ingrained into the culture that we don't even know that we're doing it. It's so regular that it's invisible.

In America, we hate, hate, hate being told what to do in our own goddamned country. Plenty of Americans continue to mock the cultural symbols of what was once a massive nation of peoples for their own amusement. They do so at parties like Pow Wow, at Halloween with "Sexy Pocahontas" costumes, and in sports with team names like the Washington Redskins. It's as if the genocide and bloody history of the American Indians that left estimates of more than 50 million dead never happened. The response is always the same: American society turns its head.

"This is disgusting," exclaimed Trilogy Productions publicist and party promoter Erin Tracy-Blackwood upon viewing a photo from last year's Pow Wow event. (She's also a Creative Loafing news and culture columnist.) "What's next? An underground railroad party where they all wear black face? People who were oppressed, (in this case, generally speaking, genocided, rather than enslaved) having their traditions and attributes as a civilization parodied, desecrated, misrepresented for the entertainment of the oppressor's descendents."

Tookie just wants to put on a good party with good DJs and good vibes. "The intention is to get everyone together so they weren't divided, in a peaceful gathering," he says. But somewhere along the way, someone forgot to teach him (and apparently the dance group the Chaotic Cupcakes, whom he hired as stage entertainment for both events) that masquerading around in pretend regalia of a hugely marginalized people, playing pretend genocide or encouraging young women to dress as sexy versions of the women with the highest rape rate in the nation (1 in 3, to be specific) was wrong.

"Speaking as an Ojibway living on reservation, I can tell you from experience that having your culture appropriated, misused, abused and so distorted that not even your own people can keep track of what's theirs and what's not... It sucks," says Anwaan Jiimiz, a musician from the Saugeen Ojibway nation who combines traditional music with modern electronica. "No one race of people has had their culture as horrendously disrespected as the 500-plus First Nations of North America. From the cigar store Indians to the hipster headdress, it's an endless stream of facepalms. That's my short answer."

Chop Shop owner Jay Tilyard was asked if he ever worries about how events are promoted at the venue or if he feels those things reflect more on the event and promoter than it does on the venue. "We monitor events to be sure they aren't too extreme, but in this day and age that is a giant gray area," Tilyard says. "I think there is a point where you know something is wrong but it has to be pretty blatant. What I find offensive doesn't exactly match what my neighbor finds offensive. There are millions of takes on that so we try not to interfere unless it is serious, and that decision can be tough. Minor infractions that are based on opinions are impossible to police or truly decide on. Artistic creative freedom is what our country and government is supposed to afford us. Similar to freedom of speech."

Chaotic Cupcakes project manager Ana Dee was surprised by the backlash her group received after the last event. "We always have creative expression but we never meant to offend anyone, we were trying to celebrate it," she says. "When you go to the event, people aren't taking it that seriously. For example, when we dress up like zombies, we aren't trying to offend the zombie world. Pow Wow is really about bringing unity and love. Our costumes only reflect our passion for the process."

Tookie, upon learning his behavior and that of the Chaotic Cupcakes was hurtful and highly offensive during the course of our interview, stated the following: "Here's the thing, I started out DJing out in Lake Wylie, my girl and all of her girl friends used to come out to my gigs. My crowds got so big that I started promoting the parties and just hiring DJs — there's a lot more money in it. This scene has been pretty good to me. I do a lot of charity. I don't want any negative feedback. If people are upset, you know, now that I have that information I can change the stage production, I can pull the Native American face off of the flyer and not have my dancers dress up as Indians... really tone it down.

"I'm kind of blown away," he continued, humbly, "because no one has ever come up to me and said anything."

"You know why though?" says Tracy-Blackwood. "Because there's so few natives left. If it were something this blatantly offensive to any other race, they would've never booked it."

She's right. There are so few native voices left that there's literally hardly anyone to speak up loud enough to say, again and again, that what people are doing hurts. Are we as Americans so disconnected from our own culture that we opt to appropriate the few instances of real culture we come across instead of speaking up and developing our own? Do we not have an obligation to create a culture of acceptance over mockery and delight in despair?

While it's disturbing that Dee can't distinguish between the fictional undead and the living, Tookie may be headed in the right direction if he acknowledges his actions hurt real people and changes his behavior — as of May 22, the flyer was changed.

Do we as Americans have an obligation to create a culture of acceptance instead of mockery and delight in despair? Are you OK with celebrating genocide in the club scene, on bar crawls or anywhere else? You have a choice, because you vote with your money. What will you decide the next time you think it might be fun to wear a headdress to the club or play cowboys and Indians at a party?

Desiree Kane, who is of Miwok heritage, is CL's travel/tech blogger.