Muslims in Charlotte: Islam is here, and it would like to be your neighbor. 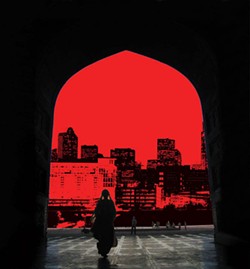 Arissa El-Amin is on the phone setting up a play date for her 5-year-old son. It's a mommy thing, she says with a laugh. Since moving to Charlotte nearly 20 years ago, El-Amin says she's found a city with a strong spiritual base.

It's also a city that can be very clueless about El-Amin's faith: Islam.

"The first question that I was asked when I moved here was, 'What church do you attend?' And that gave me an opportunity to say I'm Muslim," says El-Amin, a consultant with the civic-engagement organization Crossroads Charlotte. "I had moved here from California, and that wasn't the question that most people asked you. But the people [here] were so friendly, and it let me know that Charlotte was a faith-based community."

In fact, religion is to Charlotte what country music is to Nashville. The home of evangelist Billy Graham. The region that saw the very public downfall of televangelists Jim and Tammy Bakker. Churches dot neighborhoods from Uptown to Ballantyne. But behind this shiny Bible-belt buckle is a community of Muslims — men and women who believe in one God, community service and peace — that has been growing steadily since the Islamic Society of Greater Charlotte was founded in 1978.

When El-Amin arrived in Charlotte in the early '90s, the community here was still relatively small. Today, some 10,000 Muslims work, play and worship in Charlotte, and attend prayer services and community events at five area mosques (masjids, in Arabic). A few years ago, a group of Islam-practicing bank executives pushed Bank of America and Wachovia to set aside areas in their downtown offices to accommodate Muslims' required five-times-a-day prayer ritual. Some non-Muslims cried foul at the time, but the controversy simmered and those executives are now praying.

El-Amin got more than a few curious or surprised looks during her earliest conversations with her Charlotte neighbors, but she says she was never attacked or blatantly disrespected. "I felt good about my decision to move to Charlotte," says El-Amin, who soon found her spiritual home at Masjid Ash-Shaheed, the Sugar Creek Road mosque where she and her husband, Brian, and three children still worship.

Some prominent Charlotteans would prefer people to believe Muslims like El-Amin — a wife, mother, and professional in her mid-40s — don't exist. U.S. Rep. Sue Myrick and evangelist Franklin Graham, son of Billy Graham, promote inflammatory stereotypes about believers of Islam. Graham has called the religion "wicked" and "evil." Myrick wrote the forward to a fear-inducing 2009 book, Muslim Mafia: Inside the Secret Underworld That's Conspiring to Islamize America.

More recently, Myrick cancelled appearances during the 10th anniversary of the 9/11 attacks, claiming that an Iranian article based on a study by the Center for American Progress suggested she was in danger of being harmed by Islamic extremists. Graham was mentioned in the study, too, as were more than 20 others. None but Myrick cancelled any appointments.

Faiz Shakir, who co-authored the American Progress study, told The Charlotte Observer that Myrick's actions proved the point of his report. "This is our general issue with Rep. Myrick," he said. "She frequently exaggerates the threat of Muslim terrorism by making outlandish claims like this one. And this is why we listed her in the report."

For many Muslim families in the Charlotte area, media dramas like this are part of everyday life. "They put a lot of images out there and there's a great majority of Americans that are ignorant about Islam, which is amazing to me when you think that one out of every five people on this earth is a Muslim," says Khalil Akbar, the imam, or prayer leader, of the Masjid Ash-Shaheed. He also serves as a chaplain in the N.C. state prison system.

Akbar and other area Muslims have made great strides in forging good relationships with non-Muslims. On a balmy Sunday in August of last year, the Islamic Center of Charlotte, off Central Avenue, invited citizens of all faiths to join the congregation for an iftar dinner — the sacred meal Muslims serve to break their daily fasts during the holy month of Ramadan. The event, "Breaking Bread and Breaking Barriers," was an attempt to demystify Islam. The 90-minute program consisted of a prayer session that included the mournful sounds of a muezzin delivering an adhān — the Muslim call to prayer heard from the tops of mosques in Islamic countries around the world. After dinner, Muslim children and families mingled together with their guests in a way that would be familiar to any Christian church-goer, and members of the local Islamic community offered a brief introduction to the religion followed by a question-and-answer session.

Outreach events such as this are crucial to smashing stereotypes in traditionally Christian cities such as Charlotte. "The more people see Muslims as strange, it makes it easier to put them in a box," says Rahman Khan, founder of GoodWorks Media Group, a Charlotte-based company that helps people and businesses embrace diversity rather than fear it. "When you see [Muslims] as human beings just like everybody else — we have the same needs, wants and desires — it's like, 'Wait a minute, they're regular people,'" says Khan. "'They're praying to God for the same blessings as everyone else.'"

Charlotte's Islamic community is as multifarious as the city's general population, with believers representing more than 20 countries and multiple ethnicities, including whites, blacks, Arabs and Latinos. Muslims serve on the police force, work at local banks, teach in area schools. They cheer at their children's soccer games, just as Christian, Jewish, Hindu, Buddhist and secular parents do.

Jibril Hough grew up in a Christian family in Charlotte before converting to Islam in 1991. His relatives were generally accepting of his choice. "I have an uncle who is a Methodist preacher, and when I see him it's like we have a vibe because we're both spiritual people," says Hough, now 44. "Methodists are pretty liberal." A few family members were skeptical, initially: "They didn't know what it was, and any small change that I would make, they would make it bigger than what it was. But now, years later, they respect me for the changes that I've made, and the changes that it's made in my life."

Hough, who is married and has a 7-year-old daughter, first learned about Islam through music. "A lot of it came from the hip-hop I was listening to: Public Enemy, Rakim, Poor Righteous Teachers, different rap groups that would drop Islamic terms or would just be conscious enough to turn your thought process."

In the early '90s, finding a place of worship was no easy task for Hough. There were few full-time mosques in the area before the Islamic Center of Charlotte opened in 1993. Now, Hough says, "we have at least a dozen places where you can make the Friday prayer. We also have a full-time Islamic school and an Islamic cemetery in the city of Charlotte. Plus, we have a number of halal restaurants and some grocery stores." (Halal is food prepared in accordance with the rules of Islam.)

One of the key organizations long responsible for bringing people of different faiths together is Mecklenburg Ministries. The group has been promoting interfaith relationships in the Charlotte area since 1987. El-Amin remembers how important the organization's role was following the terror attack of Sept. 11, 2001. Members reached out to the Muslim community, offering to publicly escort women to protect them from potential backlash. Additionally, leaders representing all faiths stood outside mosques during the subsequent Friday prayers as a show of solidarity and to stop anyone who may have wanted to cause harm. "We're all created in the image of God and we're brothers and sisters," says Mecklenburg Ministries' executive director, Maria Hanlin.

"There is some timid bigotry here," says Hough, who today serves on Charlotte's Community Relations Committee. "It lies in the shadows. Where [racists] used to use a sheet to cover it, now they use the Internet." The bigger-name anti-Muslim spokespeople, Hough says, make it appear as though all Charlotteans are bigots. "The face of Charlotte is Sue Myrick, very hard on Muslims; Franklin Graham, very hard on Muslims; Flip Benham, [the high-profile Christian fundamentalist] who has been to some of our events protesting with a bullhorn. These are the faces that the outside see when they look at Charlotte," says Hough. What outsiders don't see are the bridge-builders: "They don't see the interfaith programs that we have, or the good relationships we have with the police department and the U.S. Department of Justice, our relationship with the F.B.I. office."

El-Amin, Khan, Hough and other local Muslims say they are not bitter about the extreme right-wing attacks on their faith; rather, they use the stereotyping as an opportunity to educate people on Islam's true nature. "If it wasn't for this opportunity, a lot of folks wouldn't know who we are," says Hough. "If you don't spend time around someone and talk with them, you can't find out who they are. You can't do that from reading a book and definitely not from watching the news."