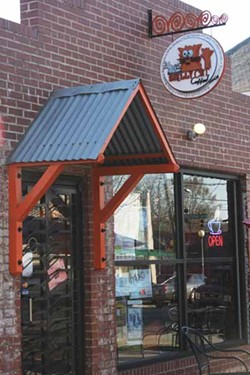 Cindy Harris is the co-owner of The Boulevard, a shop located in the heart of NoDa — Charlotte's historic arts district. Here's what Harris says about her neighborhood.

How would you describe NoDa?

What is the most eye-catching landmark in your neighborhood?

Well, I'm biased, but I think it's The Boulevard because it's a big purple building. It's brightly painted, and it's at an intersection. But I own The Boulevard, so I'm completely biased.

What are the top three places to shop in Noda?

The top three places I personally shop are The Boulevard, Green Rice and Smelly Cat, in that exact order. I'm a regular customer of my own store, buying from the other vendors.

Cabo Fish Taco, Revolution and Amélie's the French Bakery. The No. 1 place I think is visited by people coming into the neighborhood is Cabo Fish Taco.

Well, I'm a little too old to party, but I would imagine just by traffic, The Neighborhood Theatre, Solstice and The Evening Muse.

What's a little-known fact about NoDa?

There are homes that sell for over $400,000 in the neighborhood. It's not something that [NoDa] is particularly proud of, but everyone thinks that it's low-priced houses [in NoDa]. So, to hear that there are very expensive homes in [the] neighborhood shocks people.

Where is the first place in NoDa you would take a newcomer?

I would definitely take them to the galleries and the shops. Then, depending on their palate, I would go for dinner to either Revolution or Cabo. I have taken newcomers to Amelie's and they've loved it. It depends on the person. I don't bring my West Coast friends to Cabo Fish Taco. I would take them to Amélie's. But my East Coast friends, I bring them right to Cabo. I usually take them to Green Rice Gallery ... usually there's an artist in the studio like Paul or the lady who does the glass work. It's nice to see them working on a project.

How has the recession changed your neighborhood?

Well, definitely tourism is a big source of revenue for NoDa. So as the economy hits tourism, the recession is going to hit NoDa. Most of our customers from March to July are 75-percent tourists and 25-percent Charlotteans. Tourism is going to take a bite out of NoDa. There have been some business closings. I don't know particularly why, but Niche Market left. Jack and Jill opened for a month and left. The Preserve, they moved to Dilworth. I'm not sure if it's the fear of what's to come and bailing out early. I don't know if they were cutting their losses while they could. There is a lot of speculation that NoDa is going down the toilet, which is heartbreaking to me because we're the only historic arts district left in Charlotte. We're the only area left with a lot of history. It crushes my heart to hear that.

Why should people move to NoDa?

I think that NoDa has two different parts to it. There's the folks that live there and the folks that work there. To live in NoDa is to live back in the day when you can walk to a coffee shop, walk over to a gallery. You can see the city skyline, and you still have a backyard with trees. You have neighbors and a very neighborly attitude. So, it's a little bit of small town, but you're still close to the city, close to the highways. If you like an outgoing social lifestyle, all you need is a bike or a good set of shoes. You can walk everywhere or it's a short bike ride.

Name one downside to living in NoDa.

I would venture to guess that the housing prices are getting pretty high, and the houses are small and need a lot of work because they're old. But that's the charm of NoDa. If you can take what's old and make it new but not grandiose, then you'd be a perfect resident for NoDa.

— Vote for Charlotte's HOOD OF THE YEAR!