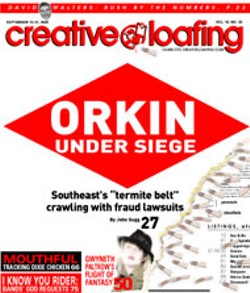 Union County homeowners Jerry and Kitty Smith and the Rev. Charles Harris, pastor of a congregation in the northeast corner of the state, have never met. But they have three things in common.

The first is a problem, termites. The second is the company that was supposed to stop the problem, Orkin Inc. The third is that their relationships with Orkin ended in arbitration and litigation.

Charlotte lawyer Richard Koch represented the Smiths after their home was nearly destroyed by termite damage. "Orkin's handling of the case was really strange," Koch recalls. "They thought Jerry was stupid, but he's really very bright. They copped an attitude and weren't going to pay a dime."

The dispute centered on Orkin's demand that massive repairs be made with lesser quality material and workmanship than the Smiths had used when they built their house. "Orkin lost, and then they appealed, and the only reason they appealed was harassment. But they lost that too. Hell, yes, they lost and paid us even more money."

Rev. Harris of the First Baptist Church in Winton, NC, encountered similar obstinacy by Orkin. "I sometimes don't feel very Christian about Orkin, and I remind myself that as a pastor I have to be calm and meek," Harris says.

Church members in 1997 found widespread termite devastation in the 150-year-old building. "There was damage to every piece of wood. The supports to the floor were gone and the floor was only held up, didn't collapse, because there was carpet glued to floorboards."

The church's contract with Orkin started in 1971, and, Harris says, "Every year they had inspected the church and told us there were no termites and no termite damage. That just wasn't true." The church took its complaint to arbitration -- where, Harris says, even Orkin employees testified that the damage was so extensive inspectors could not possibly have overlooked it. Harris' congregation won $270,000 from Orkin to repair the damage; the company had offered a small fraction of that sum.

The Smith and Winton Baptist cases have one more thing in common. They're echoed in similar tales throughout the South. But before we dig into the complaints, let's meet the Orkin Man.

No, not the ad agency actor in the hardhat and snappy white uniform shirt with red epaulets, armed with chemicals and a guarantee that he'll rid your home or business of termites and pests. This is the real Mr. Orkin, Glen Rollins, president of the bug control company and heir apparent to one of the South's homegrown corporate aristocracies.

Atlanta-based Rollins Inc. has owned businesses as varied as radio stations and speedboat manufacturers. But since 1964, when it acquired Orkin, the family outfit has been increasingly focused on creepie-crawlies, shedding most of the one-time conglomerate's broadcasting, lawn care, burglar alarm and other operations.

When he was 14, Glen Rollins began at the bottom, literally, scurrying underneath houses looking for termites and other varmints. "I was a grunt," he recalls. "I loved it. Bugs are fascinating, so are rodents. And I liked interacting with customers. We'd get to know them. I knew the kids' names, their cats."

Rollins Inc. generated $677 million in revenues last year -- $671 million from Orkin. Perhaps more telling, Rollins scored profits of almost $36 million in 2003, up $8 million from 2002 and five times what the company pocketed in 1999, according to the most recent annual report.

But Glen Rollins faces a daunting challenge. The record profits don't tell the entire story about the pest control company. Rollins Inc. and Orkin are under siege, and Glen Rollins is the general standing on the ramparts.

The outfit is being nibbled at by lawyers and disgruntled customers who are as ferocious in their attack as termites that have sniffed unprotected wood. Juries and arbitration panels have slapped multi-million dollar judgments on Orkin. Looming over the horizon are scores of other cases, at least four of which are seeking "class action" status that could pit hundreds of thousands of customers against Orkin -- and could, potentially, write the final chapter for a fabled American business icon.

At the heart of the dispute is the word "integrity." You don't read Orkin literature or talk to company executives without soon encountering the term.

In the company's annual report last year, Gary and R. Randall Rollins told shareholders: "The corporate culture at Rollins Inc. is one that promotes honesty and integrity as an integral part of the way we do business." In an interview, Glen Rollins stresses that "our integrity" is "essential."