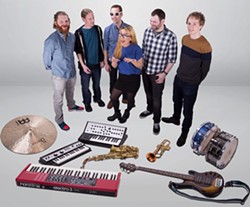 When: Fri., May 13, 10:30 p.m. 2016
Price: $6/$8
www.eveningmuse.com/event/1141273-phantom-pop-funk-rush-charlotte
Brooklyn-based Phantom Pop has toured the east coast, southern, and Midwest U.S. Often compared stylistically to bands like Snarky Puppy, Kneebody, and Weather Report, Phantom Pop is driven by neo-soul influenced synth lines, horn melodies, and aggressive rhythm section interplay. Their first self-titled album was selected by WNCW Radio as one of the Top 100 Releases of 2015.